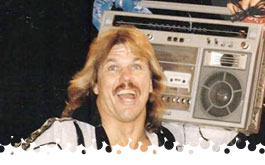 I only sorta' notice these types of things: but the opening graphics still have Kerry Von Erich slamming the recently departed Kamala. Bill Mercer is at his desk, welcoming us to another edition. But with so much going on in World Class Championship Wrestling, let's get down to ringside for...

A Special Look at Killer Khan vs. Kevin Von Erich

We get the ending of the June 30th match, when even the power of Bronko Lubich couldn't get Kevin Von Erich to break his IRON CLAW on Khan. But wait, that's not all! We also get their incident from last week, when Khan destroyed Chic Donovan's leg, until KVE made the save.

"A Visit with Chic"

That's how it's billed. Mercer and KVE are visiting Chic Donovan in the hospital. Donovan's pretty glum, as he tells us that they put a pin in his leg and it'll be 6 months to a year until he's back in the ring. Kevin says that there's no way Khan can keep running wild "against Chic Donovan, even Cindy Von Erich". Who? KVE then guarantees Donovan that he'll take out the big Khan.

Zumhofe starts quick with a hiptoss, then a flying bulldog from the corner. Mercer is joined on commentary by Gary Holder, plugging his recent book "Requiem for a Champion", all about the Von Erichs. He even gives out his address so we can a FREE copy, directly from him. Meanwhile, Kiniski works a side headlock until it's broken by Zumhofe's atomic drop. Zumhofe works the left leg, eventually settling into a step-over toehold. Knee-lift and vertical suplex gets 2 for Kiniski. Kiniski tries an over-the-knee backbreaker stretch, but it doesn't work so well, so they go into a more conventional abdominal stretch. Zumhofe gets tossed to the floor (through the ropes, so no DQ) and Kiniski does some "king of the mountain" antics to keep him out. Zumhofe eventually wanders over to his BOOM BOX, cranks it up, and returns to the ring a house-o-fire! I'm sorry, I know Zumhofe's a scumbag, but that spot still makes me giggle. I don't recognize the tune, so I'm guessing WWE dubbed it over with something generic. Zumhofe whips Kiniski to the corner and delivers a slam... but the bell rings for a 10-mintue time-limit draw. Zumhofe celebrates with the boom box, anyways.

Gino has the American title with him, and is also the Texas champ, but this is completely non-title. Wasn't that long ago that Iceman and Gino wrestled for one of those belts. Gino's not as animated as previous weeks, so they start off with some grappling by trading hammer-locks to the mat. With things in first gear, Mercer mentions that General Skandar Akbar is currently making a deal to bring in a new partner for The Missing Link. I also notice that "Von Erich lookalike super-fan" in the first row, sporting a red t-shirt. Iceman delivers a headbutt and then a headlock, while Gino tries to de-pants him. Gino gets a shot at Iceman's knee and works it over for a bit. Iceman surprises with a small package for 2, and Gino complains about his hair getting tussled. Up to a vertical base, where Iceman goes back to the side headlock, then they drop back down for more restholds. Chops, backdrop, headbutt and a slam gets another 2 for Iceman. Gino tosses him into the ropes, but the Power of the Headbutt keeps Iceman in control. Iceman comes off the ropes with a flying bodypress and they do a messy tumble into the ropes. Iceman comes off the ropes, again, this time with sunset flip. Gino counters it by flipping out, driving the legs and pulling a big handful of trunks to get the 3 count at 13:09. Gino looks in to the camera and asks for the Von Erichs.

"Modern Day Warrior and Former World Heavyweight Champion" seems to have become Kerry's full ring-name. Kerry's in control, with discus punches and a standing drop-kick. Link rolls outside and smacks his head into a chair, just for fun. Link ducks under a clothesline and takes over with headbutts. Discus punch floors Link, but Akbar reaches in to interfere, drawing the disqualification at 3:25. Kerry fights off both bad guys and clears the ring. Link tries coming back in, but Kerry absolutely blasts him with a steel chair. It seriously looked (and sounded) pretty stiff. To show he's okay, Link smashes his head into a wooden chair, several times, for good measure.

Back from the final break, Bill Mercer gives out the address for "Requiem for a Champion", once again. He plugs next week's card, when the main event will be Kerry Von Erich & Chris Adams taking on Terry GOrdy and Killer Khan. "So long"!

Why'd You Watch This?:
A rather heat-less episode, overall. Despite being Big Deals, Iceman vs. Gino was quite boring and was just...there. Kerry vs. Link had nothing to it, either. So that leaves Zumhofe vs. Kiniski as the "best" match, via default...and that was definitely well-below-average. The only mildly interesting angle is Kevin visiting Chic Donovan in the hospital... but KVE vs. Khan isn't an amazing feud. Safe to skip this episode.