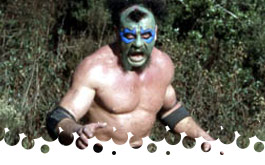 Summer in Texas continues, and I honesty wonder if the Sportatorium had air conditioning, because over the last few shows, everybody seems to have enhanced sudation. But with so much going on in World Class Championship Wrestling, let's get down to ringside for...

Flasback from 3 weeks ago and this is just here, once again, to empahsize that Von Erichs vs. Freebirds is still a thing. Hey, it was probably the hottest feud in wrestling, for over a year, so you can't blame World Class for wanting to promote it. Besides, I think the 'Birds leave pretty soon, so they need to milk this for all it's worth.

Another Gino "heat match", as his mannerisms consist of saying: "I am your champion", then yelling "shut up". Wengroff (Weingeroff) is quick to attack Gino with a headlock, then chuck him across the ring with a side mare. Gino manages to sneak in a reverse spinning mule kick, but the headlockin' continues. Wengroff takes over with a reverse atomic drop and, of course, Gino sells it like he's just recevived an acidic enema. Wengroff with a backdrop, but he misses a dropkick. Gino's quick with a vertical suplex, then a flying reverse elbowdrop from the top rope to get the pin. Yeah, a reverse elbowdrop, as in: he's falling backwards onto a prone Wengroff. A better evolution of his usual elbowdrop onto a standing opponent, but I never got the point of the reverse dive onto someone.

Ring announcer Marc Lowrance makes sure to identify Irwin as the guy with the hat and whip. Irwin threatens some whip action and Zumhofe threatens some BOOMBOX action. Somewhat unsual, as Irwin and Strongbow start with a heated brawl. So I'm curious if they had a program over on the Fort Worth shows? The "Chauncey" chants fill the air, as it seems the fans missed chanting that at Irwin. Irwin tags in his partner as they try to do the whip and dropdown double-team, but it's a misfire as Strongbow chops Kiniski, instead. Zumhofe's in with some poorly timed forearm shots, but makes up for it with a slam and an elbowdrop for a 1 count. Mini-piledriver ("skullcracker"), then Zumhofe headlocks Kiniski to the mat. Kiniski, works a head-scissors, then kicks Zumhofe to the ropes for a monkey-flip, butu Zumhofe flips out of it, perfectly, and lands on his feet. Irwin comes in for some criss-cross action, and it looks like he'll deliver a spinning side-slam (or maybe even a "deep-six" for all 2 of you Baron Corbin fans out there), but Zumhofe turns it into a headlock takedown. Nice hip-toss and drop-kick from Zumhofe, then Strongbow returns for some more chops and a sloppy backdrop for 1. Bicycle kick from Irwin, slam and kneedrop from Kiniski, then a flyings second rope elbowdrop from Irwin. Zumhofe hooks an abdominal stretch on Kiniski and Irwin flies in with another elbow, but it's a typical miscommunication and Kiniski gets nailed. Strongbow tackles Irwin and Irwin covers Kiniski for the 3 count. Short brawl, afterwards, but the good guys clear the ring and raise their arms.

The "up next" graphic said "Donovan vs. the Mongolian" and for a split second I thought: "oh crap, they brought back the Mongol". So I suppose I'm thankful to see Khan, for once. Khan no-sells all of Donovan's offense, then does his usual stompy/kicky/choke stuff. Khan works Donovan's bandaged knee, as they tell us that's why we haven't seen Donovan in awhile. Khan keeps attacking the knee until Donovan is unable to continue at 2:30. Kevin Von Erich, clad in street clothes, runs in to attack Khan. Things are even, until Chris Adams runs in and they deliver a double dropkick to knock Khan through the ropes. Donovan is still selling the knee as all the good guys and referee David Manning check on him.

Holy cats...we absolutely need to talk about this awesomeness at ringside: 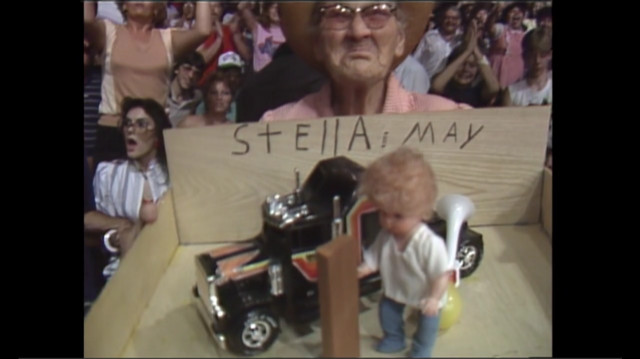 We've seen this lady at the Sportatorium before, and she always brings the enthusiasm! Garvin tries to showboat, so Kerry overpowers him with a big overhead press-slam....then mocks Garvin's showboating. Okay, that was a fun spot! Adams goes to work with a hammerlock slam, then wrings on Garvin's left arm. Link comes in to increase the work rate with a series of headbutts then--- hokey smokes--- a reverse atomic drop! Adams gets worked over for a bit, until he ducks under Link's clothesline and hits a super-kick tea party. Kerry dominates, dispatching Link and backdropping Garvin. Garvin gets tossed outside and Adams tries to suplex him back in, from the apron. Precious reaches in and grabs the leg, causing Garvin to fall on top and get the 3 count. Post-bell brawl ensues until STELLA MAE FENCH runs in to make the save! Big Slap to Precious! Big Slap to Garvin! The fans are loving this...and yeah, I'm also getting a kick out of seeing Stella Mae continuing to stalk and torment Garvin.

Why'd You Watch This?:
Two little things that presented themselves in this episode: 1) Kerry was made to look strong in the main event, always on the offense. 2) Like all the other babyfaces in World Class, Chris Adams has been an ally of the Von Erichs, but now he's becoming a frequent partner and even a friend. Hmmmm.

Another "day at the office" episode, but they're keeping the heat on Kevin vs. Khan and Stella Mae vs. Garvin. Even the tag team championship feud between Iceman/Zumhofe and the Irwins is motoring along. Add in that AWESOME ring side lady and this becomes a very mildly recommended episode. Hit the DRUMS!