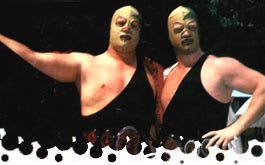 Welcome back to the "world famous" Sportatorium in downtown Dallas, Texas... plus the Will Rogers Coliseum over in Fort Worth. In addition to our matches, we have two big announcements on this episode. But with so much going on in World Class Championship Wrestling, let's get down to ringside for...

In this case, it's fresh content, as this is a re-broadcast from the weekly Fort Worth show at Will Rogers Colisuem with Marc Lowrance on the call. It's also "mask vs. betls", as the Super D's will be unmasked, should they lose. Joined-in-progess, with Zumhofe doing a stomp-along side headlock on SD2. SD1 flips into the ring, "accidentally", as he stretches to make the tag. Zumhofe flips out of a backdrop, hits the canvas, and tags in Iceman for a headbutt and some very animated chops for a quick cover. SD's try a double-team whip/dropdown move, but Iceman drop-kicks SD1. Fun spot where SD1 no-sells a turnbuckle head-shot, but it immediately susceptible to a headbutt from Iceman. Iceman tries to un-do the mask and Lowrance accurately wonders: "all they have to do is win and it'll come off, anyway. Why worry about it, now?" SD1 with a high-knee and the bad guys takeover for a bit. Slam from SD2, but he misses a splash from the second rope. SD1 is right back in to maintain control. SD1 tries to work the lower back and even gets a camel clutch for a brief instance. As seems to be tradition for 80's faces-in-peril, Iceman gets the desperation sunset flip pin attempt. Hot tag to R&R, who does some minor house-cleaning, until he ends up on the business end of an SD boot and falls to the mat. Iceman runs in and butt-butts SD1, the legal man. As referee Bronko Lubich tries to usher Iceman to his corner, SD2 rolls SD1 out of the ring and covers the comatose Zumhofe to get a 3-count and win back the American Tag Team Titles. Fans are upset and a full soda is tossed into the ring. That's about $3.00 in 1984!

Post-match antics make the fans happy, as Iceman attacks SD1 and un-masks him, cleanly! Zumhofe then unmasks SD2 and it's "Wild" Bill/Chauncey Irwin! Both (former) SD's are whipped into each other, mid-ring, and act "astonished", so the fans can see their mugs.

Pre-recorded in the World Class studio with Bill Mercer. Akbar says it's an accomplishment to have won the American Tag Titles and officially announces the Super Destroyers as "Wild" Bill Irwin and (a newcomer to World Class), Scott "Hog" Irwin. He says that "Hog" was the original Super Destroyer and wrestled all around the world, never being unmasked until now. Akbar warns "that human jukebox" Zumhofe and Iceman that this "only adds fuel to the fire". Akbar concludes by saying all the men of Devastation, Inc. will be gunning for the Texas Championship in the upcoming tournament. I've said it before: I like Akbar's interviews. He comes off like a real villain.

Khan hollers a lot as he stomps, kicks, and chokes away on Rose. In the midst of this "action", Bill Mercer drops the HUGE bomb that Kerry Von Erich has lost the NWA World Heavyweight Championship to Ric Flair, over in Japan. According to Mercer, the referee wasn't "versed too well in freestyle wrestling", as Flair actually threw Kerry over the top rope. For the pin, Kerry supposedly had his feet on the ropes and Flair had a handful of trunks. Nonetheless, the honeymoon is over and Kerry's no longer the champ. Oh yeah: Khan executes a back-breaker, then leaps from the second rope with a knee-drop to get the pin.

Gino's the American Heavyweight Champion, but this is non-title, despite the fact Marc Lowrance announces him as "the defending American Champion". Pretty sure this is one of the first appearances for Hazzard, who would go on to become a World Class mainstay as a referee. Gino's all over him, at the bell, with a kneelift, elbow-drop and a chuck-through-the-ropes. Hazzard is tossed out, again, so Gino can work the crowd. It's effective, as the crowd goes nuts when Hazzard gets ONE kick in! Hazzard gets in some basic offense, and Gino sells like crazy. Reverse elbow gets 2 for Hazzard, then he hits the turnbuckle hard. Swinging neckbreaker and a top-rope elbow-tap are enough for Gino to score the 3 count at 3:08. Just a basic squash and a chance for Gino to get some crowd heat.

More pre-recorded action from the studio. Mercer brings up the supposed "controversy" of the top-rope move, Kerry's feet being on the ropes, and the "fact" that a "Sumo referee" was officiating. Kerry is disappointed, but isn't one to make excuses. He wants to forget about it and press on. For the future, he says that the World Six Man Championship is his #1 priority. If you'll recall, one of the stipulations from the Texas Stadium "Badstreet Match" was that Kerry would take Fritz's place on the championship team. So yeah, Von Erichs/Freebirds is still a very important thing.

In case you'd forgotten that Hayes was a pr*ck, he gets the house mic and says: "there ain't nothin' in Texas but a buncha' punks!" Mercer dead-pans: "that's winning friends and influencing people, Michael". Kevin's in his prime and works some very enthusiastic armbar action on Roberts. He twists the arm, then straddles it to flip/roll Roberts to the canvas. Mike tags in and Kevin instructs him to do the same thing, with about 50% of the enthusiasm though. Most of the match is Mike vs. Roberts, as they're trying to sell the fact that Mike can hold his own in this feud. Gordy gets in some big blows and almost takes off Mike's head with a sick clothesline. Kevin returns to turn the tide and works a mid-section leg scissors on Gordy. Meanwhile, Hayes and Kerry keep threatening to bash each other with a chair, at ringside. Eventually, Hayes rolls into the ring, Kerry follows and th match is thrown out (probably a double disqualification, but we can't hear the official announcement). Look out, because Hayes takes off his BOOT, again! Killer Khan runs in to help the Freebirds, but eventually the Von Erichs stand tall and clear the ring.

Why'd You Watch This?:
Definitely a "house keeping" episode. They covered the two big titles changes well, and kept things rolling with Gino, Khan and Von Erichs/Freebirds. In a way, the message from World Clas is almost "hey, forget about Kerry vs. Flair, we've got Von Erichs vs. Freebirds"!

They're the exact same wrestlers and have the same moves, but I'll miss the "Super D's". It's why I'm using their picture, up top, one last time. It's funny that "who is under the masks" was never an issue, until it suddenly was, this episode. From what I recall, there's a loose lineage of guys calling themselves "The Super Destroyers", from the 60's to the 90's (I think a young Sgt. Slaughter was even one). While I'd be interested in finding out, I hope I never have enough free time that I begin searching for it.

Kerry's NWA title loss is a big bombshell, but it's handled well enough to maintain his heat. In reality, I've read that it was a clean loss and it was one of Japan's usual referees. I don't believe World Class ever shows footage of the actual match, either. Ring results say Kerry had quite the whirlwind of title defenses in his 18 days as champ. He supposedly defended it in Texas against Jimmy Garvin and Terry Gordy, then over to Florida to face Superstar Graham and Ron Bass. Before losing to Flair in Japan, he successfully defended against Jumbo Tsurata. Hey, not a bad two weeks (plus) of work and definitely more prestigious than Ronnie Garvin's NWA reign *rimshot*!