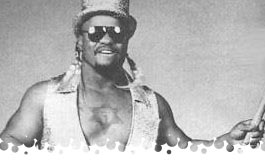 World Class Championship Wrestling, the "only rasslin' program seen around the world" is back for more fun. Bill Mercer runs down tonight's card, and I don't think I've ever officially noticed or mentioned that World Class likes to refer to their guys by their first names. Usually, babyfaces are first names (although there are some exceptions, like "Gino") and heels are last names. Example: the on-screen graphics (and Bill Mercer) say that we'll see "Kevin & Chris vs. Gordy & Garvin". Of course, a big reason they do it is that a good chunk of the face roster has the SAME last name. It also makes it easier to fit everything on tour on-screen graphics. But with so much going on in World Class Championship Wrestling, let's get down to ringside for...

We need to talk about Rose and his RAT-TAIL. Link goes all Baskin-Robbins, delivering 31 flavors of headbutts, until a flying version gets the pin. Well, actually, the camera angle isn't complimentary, as we can see Link leap, land on his knees, then kinda' duck his head forward to lightly connect.

Mercer and the camera crew are on-location outside an "NWA Conference Room"...which actually looks like a break room. The Freebirds have requested a hearing, claiming that the wrong man was pinned in the big "Badstreet Match" at Texas Stadium. However, the Von Erichs maintained that it was a "Badstreet" anything goes match. For the record, we see the ending of the match, where Fritz appeared to be the legal man, but it was Kevin who actually made the pin. The 'Birds show up half an hour late to the conference and told to "sit down and be quiet" by the NWA Representative, Earl Wilburn. He also scolds the Von Erichs (Kerry, Kevin and Mike) for acting up, saying they get no breaks, "just because you're the fan favorites". Wilburn then shoo's Mercer and the crew away, so he can make a decision.

When we come back, Wilburn announces that his decision is that the win is null and void. The 'Birds instantly celebrate, thinking they're the champs, again, yet Wilburn clarifies that there will be a match to determine who the champions will be (don't call it a "re-match"). Hayes and Kerry get in each other's face and a big brawl breaks out. Mercer says: "we have a problem" as we cut away!

Back again, as the wrestlers have left and Wilburn announces that there will be a "very large fine for the damage they have done to this room"...as he holds up a broken chair arm. His suggesting for the upcoming match is to allow all 6 men in the ring at the same time. I don't think I've ever run across Wilburn, before, but I have to say he's excellent in this "authority figure" role. Clearly not playing favorites and very business-like.

Ring announcer Marc Lowrance explains the stipulations of the penalty box: if you break a rule, you're in the ringside shark cage for 1 minutes. 2 minutes for the next violation and so on. Important to note that there are 2 cages, one for each team. I'm curious what happens if both members of a team break a rule at the same time?

Adams and Garvin start with a brawl. Kevin hops on the rop rope and comes in with an elbowsmash. They do a double-team whip and backdrop, which scores 2 for Adams. The fans chant "we want Stella" to rile up Garvin and he, of coruse, sells it well. Adams gets caught in the opposite corner and Kevin tries to make the save, but gets assigned to the penalty box by referee Bronk Lubich. Gordy tries a suplex, but Adams reverses it. Adams gives a valiant solo effort, but takes a poundin'. Precious trips up Adams and outside referee David Manning assigns her to the box, to a big pop. Gordy gets his typically cool one-armed slam, but misses a kneedrop, allowing Kevin to tag back in. Kevin and Gordy tackle each other and roll around, punching. Adams and Garvin both interfere and get sent to the boxes. Kevin bounces off the ropes and hooks the IRON CLAW! Gordy uses leverage to throw KVE to ringside, but he flies back in with a forearm shot. Gordy chokes him to the mat, until a rope break. Both teams are back at full strength as Kevin reverses a piledriver attempt and makes the hot tag. Adams does a standing somersault and nails Garvin with the Super-kick. Kevin hooks the standing body-scissors on Garvin and rolls him to the mat for 2. Gordy is out of the box... and right back in for interference...then back out, again, after about 45 seconds. So much for those increasing time intervals.

Garvin gets sent to the box...and the crowd rises to its feet as Stella Mae French comes to ringside to beat on him! When his penalty expires, Garvin refuses to come out. It's not until security and David Manning get involved that he can exit. Garvin is rolled into the ring for a go-round with Adams. Stell Mae gets up on the apron, and Precious uses the distraction to set up a chair in the opposite corner. Garvin smashes Adams into and gets the 3 count. The penalty box gimmick seemed rather random and I was wondering what they could do with it, until Stella Mae showed up. Indeed, her interactions with Garvin (and his great selling) made the match.

Gino starts with his usual posturing to torque off the crowd. Iceman gets two nice hip-tosses to send him bailing. Iceman then mocks Gino's strutting to a decent pop. They go into the Penultimate Knucklelock Challenge, until Iceman walks the ropes to toss Gino to the mat. They do it again, and this time Gino tries to walk the ropes, but Iceman lets him fall and he crotches himself. Iceman takes control, as Gino constantly tries to beg him off. Backdrop and a snapmare scores 2 for Iceman. Double-kick and slam gets another 2. Gino takes over with some cheapshots. Iceman regains control, but then "Wild" Bill Irwin and Skandar Akbar come from out of nowhere, with a whip, for a beatdown. Buck Zumhofe and Chris Adams then run in to make the save. Gino laughs at Iceman as he sneaks away. DQ win for Iceman at 9:41, officially.

As Bill Mercer signs off, he tells us that Broko Lubich has fined Irwin and Akbar for their actions.

Why'd You Watch This?:
Some great fun in this episode. The Von Erichs/Freebirds conference is a delight. It's like two groups of figthing kids being called to the principal's office, but still misbehaving. The penalty box match seemed pointless, but Stella Mae and Garvin saved it. I didn't think they could do it, but World Class had slotted Stella Mae into Sunshine's spot and it seems to be working.