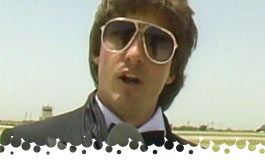 It's summer in Texas, which means it's hotter than a donkey in heat at Mardi Gras. Bill Mercer is at the Sportatorium sound stage and recaps two big angles from last week: Stella Mae French attacking Jimmy Garvin during the penality box match, and a replay of "NWA Official" Earl Wilburn's meeting with the Von Erichs and Freebirds. Hey, in June 1984, VCR's weren't widespread, so it's perfectly fine to have these "In Case You Missed it" encores/recaps. But with so much going on in World Class Championship Wrestling, let's get down to ringside for...

Marc Lowrance is at a commuter airport, in front of a leer jet as Gino pulls up in his Mercedes convertible. World Class really did a great job with these "on location" segments. Lowrance informs us that Gino's not only the American Heavyweight Champion, but recently won the Texas Championship "in controversial fashion". I thought the Texas title tournament was fictional, but they actually held a one-night tournament in San Antonio's Freeman Coliseum -- and Gino beat none other than Ric Flair in the finals. Anyways, Gino says he's on the way to California to see all his Hollywood friends. Y'see, he's had all these offers to do movies, since he's the most handsome man alive. He throws out threats to the Von Erich family as he boards his private jet. Gino's sorta' the World Class version of Ric Flair, in case you were wonderin'.

Lowrane introduces him as "Weingeroff", but the graphics says "Wengroff", so there ya' go. Mercer wastes no time telling us that Weingeroff s legally blind. Initial lock-up is like basic training, but Weingeroff gets scratched and lightly cut, somehow. They trade takedowns and side headlocks, then hit the ropes. Weigneroff tries a leapfrog, but grazes Mantell's back. He tries to make up for it by reaching up with his legs to make a sunset flip cover for 2. Roll-up off the ropes gets a quick 1 for Weingeroff, and we go back to more headlockin' and hammerlockin'. The crowd is dead, but starts a very mild and brief "Go John, Go" chant out of boredom and tradition. Mantell gets a flying reverse head-scissors for 2 and Weingeroff reverses it into a pin attempt and a sideways head scissors. They hook arms and do a gator roll on the mat. They trade covers and the bell sounds for a time limit draw at probably 10 minutes. Umm...I guess Verne Gagne would've been into this.

Mantell puts over Weingeroff as a great, scientific competitor, then talks about how he once visited a school for the blind. "They can't see ya', but they can hear and SMELL ya' comin'". He says it's an honor to be in the ring with a competitor like Weingeroff.

World Class TV debut for Tatum, and while he appears to be a smiling babyface, he still demonstrates some showboating. Since it's a Gino match, you probably know the script-- he sells like crazy, works the crowd, and gloats when he has the upper hand. Gino shows his wrestling chops by working a spinning toe hold to the mat. Tatum fights back and Gino takes a powder to the outside. Back in, he suckers Tattum in for a suplex, swinging neckbreaker, then a flying top-rope elbowsmash to get the pin. "Top-rope elbowsmash" might make you think of Macho Man, but Gino's verison usually requires that the opponent be standing, so Gino can tap him in the external occipital protuberance.

Something of a grudge match as Khan bloodied and spiked KVE back on the June 2 epsiode. Khan attacks as soon Kevin enters the ring. Heated brawl ensues, but Kevin manages a nice standing drop-kick to the mush. Khan whips him to the ropes for a double-chop to the throat, but misses a kneedrop. Kevin tries a flying body-press, but Khan catches him and turns it into a side back-breaker. Khan goes for the Oriental Spike, but is met by the IRON CLAW! Khan inspires a young Austin Aries with a thumb-to-the-eye, then goes intoo choke/stomp mode. Referee David Manning tries to stop the choking, but gets press-slammed! Quite the ref bump and probably the Spot of the Night! KVE flies from the top as he and Khan try to trade their submisison holds. Referee Bronko Lubich arrives to try to break things up, but gets shoved aside. Jules Strongbow, Chris Adams, Johnny Mantell, Buck Zumhofe and John Tatum all arrive to help, yet chaos reigns. Bill Irwin and Kelly Kiniski run in for some heel help. Officially a disqualification win for KVE, but the crowd was totally into this. Seeing the entire locker-room empty to break up a brawl was always big excitement. Sold the time-honored "two guys just want to bea ton each other and NOTHING can get in their way" thingie.

Why'd You Watch This?:
While the crowd is amped and World Class was red-hot at the time, this is not exactly a memorable episode. Gino Hernandez's interview is probably the only thing worth watching. He'd been in World Class from 1980-1982, roughly, but now that he's back they've strapped a rocket to his back and have immediately pushed him like to the sky. While he's not a great wrestler, he's definitely a good cocky, rich, a-hole, jet-setter character. Regardless, get used to him, because he'll be a big part of World Class for the next 18 months.