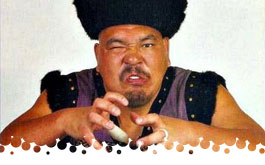 With Texas Stadium and the David Von Erich Memorial Parade of Champions now officially in the rear view mirror, it's back to the Sportatorium for our first full "regular" episode. We'll be seeing some new arrivals in action, along with some important news. Bill Mercer is back on commentary and Marc Lowrance has resumed his ring announcer duties. This episode appears to have been taped on May 18, 1984. But with so much going on in World Class Championship Wrestling, let's get down to ringside for...

Lowrance asks the crowd to welcome Torres to the Sportatorium, usually a sign that this is a guy's first match in World Class. Khan is probably one of the least convincing "monsters" of the 80's-- probably due to his fairly narrow shoulders. Khan's antics are 90% identical to his 1981 "Halloween HavoK" WWF jobber squash. He lands a flying kneedrop from the second rope, but Terry Gordy asks him to apply the Oriental Spike. Khan does just that, driving his taped thumb into Torres's throat until referee Bronko Lubich awards him the bout via submission. See, Khan's not just the typical "evil foreigner", he's also a "friend of the Freebirds". Translation: Boo the Crap out of him, Sportatorium faithful. Yet they cheered him, last week. Oh well.

Mercer and Adams and narrate some recent footage from Fort Worth, when Stella Mae French made her debut, attacking Jimmy Garvin and Sunshine. Adams says she's a "crazy woman" and wants to be his tag partner. Adams says that Stella Mae was Sunshine's aunt and raised her as a child. Adams then kinda' jumbles things as he talks about the "deteriorated state" Sunshine is in, and that she's had a nervous breakdown... but last time we saw Sunshine, she seemed to be riding high. Adams doesn't really clarify between Stella Mae and Sunshine, but history tells us he was talking about the latter.

Another new jobber, whom Mercer actually calls "John Kelly" for a bit. King seems a little green and is really into working hammerlocks and armbars. Strongbow obliges the grappling, with a full Nelson and a takedown. Strongbow works an armbar, even holding it through King's slam. King breaks the hold with some shots to the ribs, then whips Strongbow to a ropes for reverse elbow smash and gets a nice pop, actually. King whips him, again, but this time tries a horrible and dainty kneelift. Strongbow pops the crowd with a loud SLAP to King's mush. King gets a drop-kick for a quick 1 count, then Strongbow "goes on the warpath" by hopping and chopping. King politely helps Strongbow by leaping over him to sell a backdrop. Strongbow then applies a spinnng toe hold, and cranks on the Indian Death Lock for the submission win. Well, this was poo.

Mercer introduces him as "the World American Heavyweight Champion". Gino's in full braggart mode, saying how he did what he said he'd do-- he won the American Heavyweight Championship. "I'm back!" May seem strange to have a "new" guy come in and immediately win your top belt, but Gino was well known to World Class, as he had a pretty lengthy run from about 1980 to 1982. Earlier in the show, Mercer said that Gino won the belt from Jimmy Garvin in Puerto Rico, but records state it was from Chris Adams had the belt last. I'm about 50/50 on whether the whole thing actually happened in "Puerto Rico". World Class would occassionally hop over there, but records say this episode is Gino's first in-ring action for his return. I'm guessing he was awarded the title upon his return, similar to the way the Super Destroyers were given the tag titles.

Non-title match, but Gino has the belt with him. Gino wastes no time, yelling at the crowd as soon as the bell rings. Animated collar-and-elbow tie up as the roll around the ropes. Gino delivers a hip-toss and leads his own personal cheering section. Gino keeps the animation high, as he's visibly riled up by the "Go Johnny Go" chants. Mantell delivers three of his own hip-tosses, Gino bails, and the fans go nuts. Gino applies a full Nelson, but Mantell drops down and kicks him in the noggin. Gino bails again and the crowd is 100% into this. Nice Irish whip and reverse elbow, but Mantell quickly kicks out. Gino works a reverse chinlock, all the while telling the crowd to shut up. Gino goes to the top, but Mantell meets him and tosses him across the ring. Gino sells it like he's just broken 4 vertebrae. Mantell then chucks him to the corner, where Gino does a stuntman flip over the ropes, and takes out a security guard! Back inside, Mantell won't go away, attacking with a flying axehandle and reverse elbow. Gino blocks a monkey flip attempt, then delivers a suplex and jumps from the top with a diving reverse elbow to get the pin. Actually a good example of Heel Tactics 101, as Gino's antics and selling really turned an ordinary jobber match into something that lit the fans on fire. Mantell came out looking great and Gino played the perfect wily, yet capable, heel.

FWIW, Kevin seems to have traded his usual monotone trunks for something that resembles swim trunks. Mild brawl to start, but of course Hayes bails to get the "Go Home, Freebird" chants started. Hayes returns with a sunset flip for 2, then gets blasted with a nice drop-kick from KVE. Side headlock from Hayes slows things down, just for a bit. Kevin works himself free, then walks the ropes to deliver a "tremendous whack across the head". Abdominal CLAW applied, but Hayes rakes the eyes. Swinging neckbreaker from Hayes, then pulls his kneepad down for a kneedrop and gets a 2 count. Hayes misses a cross-body and gets knocked outside after two more drop-kicks. Back to the mat, as Kevin applies a headlock and body-scissors, to make a young Samoa Joe happy. The Sportatorium crowd appears to be EVOLVING, as they now chant "we want the CLAW"! Kevin then goes to solely the body-scissors, applied from a front position with his shoulders on the mat...and Hayes writhes away, comically. This segment is quite weird, and if you walked in at this point, you'd be wondering what the heck you're watching. Hayes fights back and hits his bulldog, but only for 2. Kevin misses an elbow, and Hayes chucks him through the ropes to the floor. Back in for a slam for Hayes, then he tries coming off the top. Kevin instantly pops up and catches him with THE CLAW! That cues the run-in from Terry Gordy...who also gets caught in the CLAW! Killer Khan then enters and the beatdown commences. Khan applies the Oriental Spike...as John King tries to make a save, but gets ejected. "Iceman" King Parsons, Chris Adams, Jules Strongbow and Johnny Mantell finally make the save. However, Kevin is bleeding from the mouth, due to the Spike. Officially a DQ win for Kevin Von Erich, as if that matters.

Mercer wraps things up, but lets us know that doctors have checked Kevin Von Erich and he's not seriously injured. Save your postcards.

Why'd You Watch This?:
One detail that slipped in, during the matches, was Mercer announcing that a tournament for the vacant Texas Heavyweight Championship (last held by David Don Erich) would be taking place, soon. "Cities are bidding on hosting that one". Sure...if by "cities" you only mean "Dallas and Fort Worth".

So Freebirds/Von Erichs is still a thing, in case you were wondering. Indeed, this episode delivered an iconic visual, as we got to see Kevin applying the CLAW to both Hayes and Gordy, simulatenously! They also established both Gino Hernandez and Killer Khan as Big Deals. Oh, and Stella Mae French as a Slightly Better Than Mild, But Not Yet a Big Deal.