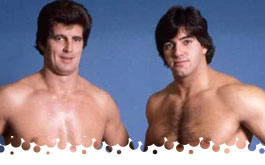 It's more 2019 Halloween HavoK! This time, we're jumping back to Halloween, 1981. Aside from the date of this show, I'm highly skeptical that we'll get any direct references to Halloween, but we shall see. Well, here's one that I wouldn't have thought of, had I not picked this show: my Halloween 1981 costume was supposed to be "Dracula". It was actually my 1980 Darth Vader costume, minus the mask, and with my face painted white. I probably had a pair of those cheesy plastic fangs. But enough of my yakkin'-- about this show. Our hosts are Vince McMahon and Pat Patterson, who list off who we'll see, today. Patterson laments that Rick Martel and Tony Garea have recently lost their Tag Team Cahmpionship to that dastardly duo of Mr. Fuji and Mr. Saito. But with so much going on in the World Wrestling Federation, let's get down to ringside for...

McMahon and Patterson quickly sign off as credits roll over the match ending, simply saying: "see ya' next week".

Why'd You watch This?Simply put, because of its October 31 date. Indeed, that's actually debatable, because these shows were sent out to local networks to air whenever they could fit them in. Plus, who knows when the actual taping date was? So it's understandable that there's no mention of Halloween. But hey, YOU got to hear my stupid story about my 1981 Halloween costume! You wouldn't have heard that were it not for this show and Halloween HavoK! Anyways, hope you have fun on your Halloween night and don't do anything I wouldn't wanna' watch.