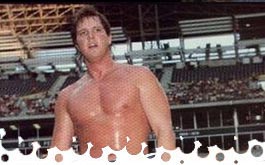 It's been about 8 or 9 months since I've recapped any World Class episodes, due to the transition and lull from the "old" WWE Network to Peacock. Apologies to all 3 people who follow my ramblings. As far as I know, all World Class episodes have been available on Peacock for awhile. Maybe even some "new" episodes that weren't there, before. Oh, and the quality and frequency of "commercials" has improved. I know some rant about this, but it's okay for me, as I typically watch all my old rasslin' in 5-10 minute segments, spaced out over a week or two. Anyways, Bill Mercer pumps up tonight's card/episode. Curiously, a video hype clip of Gino Hernandez shows him taping up his hand with a foreign object. But with so much going on in World Class Championship Wrestling, let's get down to ringside for...

Digging a bit deep for this replay, as it was featured back on the July 7th episode, plus they aired a brief clip of it the July 14th episode. I think Chic's working his way back to the ring, plus Khan's still presented as a Big Deal... so it's somewhat relevant to the current scope of things. In case you were wondering, the ending is still the same: Khan stomps away on Chic's knee until the ref calls for the bell (Chic unable to continue). Chris Adams and Kevin Von Erich both make/made the save.

Back to current action, and it looks like attedance is down, a wee bit, at the Sportatorium. More likely, this is the first match of the night and the crowd will pick up, later. Ware wastes no time, as he slams Adams, twice. Adams slips out of the corner and hits a backdrop, then an arm-wringer. Ware gets another slam, then misses a fist-drop and walks into an arm drag and arm extension from Adams. Ware comes back and tosses Adams through the ropes. Back in, Adams gets a sunset flip for 2, a dropkick, then tosses Ware outside, returning the favor. Back to the ring, where Ware hits a reverse elbow and a forearm drop for 2, then hooks a reverse chinlock to cue "Go, Chris, Go" chants. Adams fights off, but bounces off the ropes into a big punch-to-the-jaw. Ware ties up Adams in the ropes and thumps away. Vertical suplex from Ware, then he goes upstairs.... but Gary Hart talks him down. That's all Adams needs to recover and blast Ware with the super-kick for 3 at 9:45.

Pre-recorded, and I appreciate that Young is wearing a suit and tie. Young warns Norvell Austin, "give your soul to the Lord, because your blank is gonna' belong to me". Yes, he said "blank". Kerry then comes in to ACTUALLY USE A LOCKER, talking about how Gino Hernandez "ripped off" his brother, Mike, for the American Heavyweight Championship. Kerry talks about Gino's new bodyguard, Andrea the Lady Giant, saying: "I don't even think women should be in the ring, in the first place". Uh-oh. Yet Andrea had better watch out, because that crazy Stella Mae French has taken out a lot of truckers, and is nothing to sneeze at. Did I mention how amazing it was to see someone actually use a locker in the locker room?!

Gallegher is wearing a Pro Wrestling Illustrated t-shirt, which I'm sure helped boost his stock in the "Most Popular" Apter Rankings. Link thumps away, with Gallegher only getting in an almost accidental shoulder-block. Link is thorough, as he uses both the atomic drop and the reverse atomic drop. Cross-body slam, then Link jumps up top for his diving/charging headbutt to get the easy 3 count, around the 5 minute mark.

Marc Lowrance On Location Interview with Gino Hernandez and Andrea the Lady Giant
Gino pulls up in his white convertible, bragging about how he's a dual champion, once again (Texas and American Championships). He's in full-on braggart mode, talking about how great he is and now, with "Nikla Roberts" watching his back, the sky's the limit. Lowrance astutely keeps to the branding guidelines, by referring to her as "Andrea the Lady Giant".

Ring announcer Marc Lowrance notes that Gino is the Texas and American champion, but that this is a non-title bout. Gino stalls, allowing the crowd to rile with chnts of "we want Stella". Kerry tries a hiptoss, but Gino atually reverses it and beals him to the ropes. They try it again, but this time Kerry twists it into a backslide for 2. Kerry then wroks an arm-wringer, so Bill Mercer can an upcoming card at San Antonio's HemisFair Arena. Kerry takes Gino to the mat with a hammerlock and works the shoulder with his knees. Back to a vertical base, Gino tries his own arm-wringer, but Kerry rolls through and hits a nice drop-kick. Gino lands a spinning crescent kick, then pounds Kerry into the corner. Kerry accidentally hits the post and Gino drops him with some reverse elbows. Front face-lock rest spot from Gino, cueing the "Go, Kerry, Go" chant. A kneelift, boots-to-thenose, and a snapmare gets 2 for Gino. Kerry with anothe nice drop-kick, then Gino gets his arms caught i the ropes. Gino fights back with a knee-to-the-groin and tosses Kerry to the outside. An old dude in red cover-alls, in the front row, is intensely leading the chants for Kerry! Hey, YOU tell him that it's not helping! Kerry hops back inside with a sunset flip for 2, then both hit the ropes and bump heads. Kerry is back up, first, and hooks the IRON CLAW! Gino breaks it with the Iron Thumb to the Eye. Back too their feet, as Gino swings widly while Kerry lands some discus punches. Kerry with a bearhug, as Stella Mae French arrives at ringside. Kerry is tossed out, again, and a little blonde girl runs over to offer him a tap of support. SKerry rolls back in, right as Stella Mae gets up on the apron. Gino tosses him OVER THE TOPE ROPE, drawing the disqualification from referee Bronko Lubich at 11:35. Everybody gets in the ring for a heated face-off, as Kerry holds back Stella Mae. This was a well-worked main event that the crowd was totally into.

Bill Mercer signs off from the center of the ring, telling us to tune in next week for Kevin Von Erich & Chris Adams taking on Killer Khan and Scott "Hog" Irwin. "So long, everybody".

Why'd You Watch This?:
Surprisingly, the crowd size didn't increase as the show went on, but they were still hot, which added to the show. Especially the main event. Probably one of the better in-ring showings we've seen from Gino, since his return to World Class. The Cotton Bowl/Texas State Fair extravaganza is on the horizon, and while things are moving along, I think there's still a big angle coming up very soon.