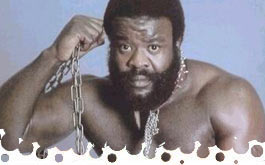 - Hosted by "Mean" Gene Okerlund, along with co-host Lord Alfred Hayes. Guests this week include Jimmy Hart, Sivi Afi, Mr. Fuji, The Magnificent Muraco, and the Junkyard Dog. That last one was obvious, since the WWE Network teases "Junkyard Dog presents a Dog show." I wonder if we'll get to see the escort Bobby Heenan had a few weeks ago.

I honestly expected them to bring Jimmy out first. Sadly, JYD doesn't come on stage with a handful of candy bars. Okerlund says the Dog has the Intercontinental Championship on his mind and ask if we'll see him teaming more with George "The Animal" Steele.

Recycled from the April 26th episode of Championship Wrestling. Haiti Kid can stand on the apron for some reason. Steele chases Barbie around the ring, then does the same to Sharpe. Steele gets caught in the corner and Barbie throws the SADDEST knee strikes I've ever seen. Sharpe with a whip and clothesline, but Steele counters by biting the arm. JYD in with headbutts, Sharp bellowing to sell the entire time. Sharpe saves Barbie by tripping up the Dog, but the Haiti Kid gets a bite out of Sharpe and lures him around the ring and into a clothesline from Steele. THIS IS BEDLAM. Back inside, JYD winds up and clobbers Sharpe with a clothesline. DOUBLE NOGGIN KNOCKER. JYD holds Barbie so the Haiti Kid can bite him, too. Sharpe tries his luck again, but the JYD only sells for about 4-seconds. JYD hits Barbie with the THUMP for three at 4:35. This was just comedy to push Haiti Kid's involvement in upcoming matches, which makes recycling this match an odd choice since it was intended to push a series of tag matches featuring the Kid.

Back in the studio, Alfred says the JYD has a "very exciting" career ahead of him that includes chasing the Tag Team or either of the Singles Championships. JYD denies wanting to mess with Hulk Hogan, he's got his eyes on the Intercontinental Title. Okerlund says JYD has some guests along with him this week, his whole family of dogs. We return from a commercial break with the Dog still in the chair. Out comes B.C., Beatrice Conley, along with a German Shepard, and yes, they have a runway to show off the dog. I'm sure that set Vince McMahon back a good $40. Probably took it out of Lord Alfred's paycheck. The fun isn't over, as Okerlund hands the documents over to Ms. B.C. to introduce other owners and their pets. The stock music dubbed in drowns out Ms. Conley to the point I won't bother trying to listen to any of it. Sorry. We've got as Great Dane, French Poodle and Golden Retriever among others trotted out for our "entertainment."

This should be interesting, depending on the amount of blow in Muraco's system. Muraco mimes that he must scrape dog-doo off his shoes on his way to the stage. "That's absolutely nasty, and I thought you were going to clean this show up!" Hopefully Fuji didn't dognap and cook any of the guests we've just seen. We immediately throw it to some footage of Muraco in action.

Recycled from the April 12th episode of Championship Wrestling. Muraco yells at a ring attendant to clean the ring better of the turnbuckle stuffing. Lockup and Muraco with an easy takedown. Muraco takes Morgan over with a hip toss, followed by a snap mare and rolling neck snap. Muraco with a knee to the midsection and a gut-wrench suplex. Morgan gets tossed out of the ring and met with a chop from Mr. Fuji. Back inside, Muraco with a sloppy piledriver. Morgan tried going up for it too soon and paid for it. Muraco scoops him up and finishes with the reverse Piledriver at 2:57. "That's how you do a piledriver!" Is Muraco taunting Mr. Wonderful? Who knows? Who cares?

Back in the studio, Muraco is scraping the doo-doo out of his shoe with Okerlund's pen. He says Mr. Fuji has FANTASTIC RECIPES FOR DOGS. Oh, MY GOD. In Fuji's country, he has something called Teriyaki Dog, among other recipes. Okerlund asks "you don't eat dog, do you?" "Why you think we so smart? Replies Fuji. "That's got to be a rib, Don." "Yeah, they BBQ the ribs, too." OK, this one is worth watching.

If this is anything like his last appearance, this should be a quick visit. Afi comes out wearing only a pair of shorts and some ankle wraps. Oh, and he's carrying a large tool known for fire-dancing, used by "The warriors of the old days." Okerlund offers him a light, but I don't think the studio is insured for that stunt.

Joined in Progress from the March 16th card held at Madison Square Garden. Afi with a sunset flip for two. Spot lands a kick to the chest, takes Afi over with a snap mare and grabs a chin-lock. Weird to hear Ventura and Monsoon calling action for the regional broadcasts, since Ventura rarely worked those shows. Afi fights free and gets the better of a slugfest, only for Spot to cut him off with an inverted atomic drop for a two-count. Whip is reversed and Afi with a BAAACK body-drop. Afi with an elbow drop for two. "Can't leave the left arm hanging out like that." Whip and Afi with a diving something-or-other for two. Afi drives a knee to the midsection and comes off the ropes with a headbutt for two. Whip to the corner and Spot brings up the knee. He climbs the ropes, missing a splash. Afi climbs up now and finishes with a flying body press at 2:52 shown.

Back in the studio, Afi comes out again, this time with the twirling firestick. I feel like someone ripped off the theme from "The People's Court" and dubbed it over whatever they used in 1986. At least he can perform the gimmick and wasn't simply handed a prop that he had no idea what to do with. HE'S EVEN PUTTING THE FIRE TO HIS MOUTH. Afterwards, Okerlund quips that it smells like Jersey in the studio.

What happened, couldn't they bother promoting his appearance at the top of the show like they did for everyone else? Atlas comes out with a sketch pad, and he has a crude picture of Don Muraco that implies he's a clown with big feet. Okerlund says Atlas has a phenomenal physique as we cut to footage of him action.

Joined in Progress from the February 17th card held at Madison Square Garden. Atlas throws Barry O down to counter a top wristlock, with Barry complaining about hair-pulling. If you don't want to be treated like a girl, cut your hair. We get an AWFUL whip to the ropes and clothesline. Like, how could two experienced workers do something that poorly. The crowd can be heard booing even with the audio-sweetening. Barry O grabs a front face-lock, but Atlas easily escapes that and socks Barry on the jaw with a right hand. Atlas pulls him up by the tights and finishes with a press slam at 2:00 shown. Wow, I still can't get over that clothesline spot. I spent more time researching when this was taped than how long I had to watch of it.

Back in the studio, Okerlund asks Atlas to take off his shirt. "He's stacked like a brick... building." Alfred must help peel the shirt off Atlas' back as Okerlund says you don't get that body sitting at the dinner table. Okerlund says Atlas won the title of "Junior Mr. Universe" and wishes him luck in the future.

Okerlund has the latest issue of the WWF Magazine, featuring an article on The Slammy Awards. Jimmy Hart detours, cutting off the studio band. He's going to show off his musical skills, but the band is still out of tune and we cut.... to probably them editing Jimmy singing something that would cost the WWF money. We come back from commercial with Hart talking about selling millions of albums when he was with the Gentry's and then again with the Wrestling Album. Hart complains about not getting to sing and accuses Okerlund of paying the band off to mess with him. He throws down the challenge for a Battle of the Bands where if he loses, he will never sing again. Okerlund says he wants the TNT band, and Hart more than happily obliges since no one else wants them. Okerlund wants Hayes to judge, but Hart complains he likes music from 1946 and calls him out for not knowing who Van Halen is. Okerlund calls Hart a squirrel and compliments his unique sense of fashion.

We come back from commercial with Gene Okerlund in the crowd, but Jimmy Hart interrupts, still wanting to challenge Okerlund to a sing-off contest. He's the best singer in the WWF and dares the TNT band to play in any key they want, but before he can sing, the JYD shows up to sweep him away from the set... literally. He's got a broom in hand.

Final Thoughts: Odd show this week, which should be the normal assessment when covering TNT. Don Muraco and Fuji talking about eating dog was something else, but other than that, just an average show with nothing to seek out, unless you're one of the four fans of Sivi Afi that still won't come clean about it.