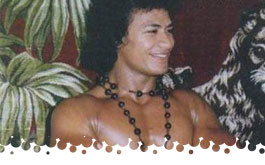 - Hosted by Vince McMahon, with co-host Lord Alfred Hayes. This week, Vince's guests will be Bobby "The Brain" Heenan, Jimmy Hart, Terry Funk, Superfly Afi, and The Junkyard Dog. I wonder how long it took them to stop using the "Superfly" nickname and adopted calling Afi "Sivi Afi" moving forward.

It's been a few weeks since I've heard "Terrible" attached to Terry Funk's name, so maybe Vince finally gave up on trying to get that one over. Funk promises us footage from the famed Double-Cross Ranch. Vince asks if that's in North Carolina. Funk says it's more acres than McMahon can afford. Maybe in 1986. Funk says Amarillo Slim is his neighbor and taught him to gamble. We throw to footage of Funk and Hart branding cattle in the middle of the night. Some goof shows up to dispute the branding, pointing out the calf is already branded, and promises he and the rest of the crew are quitting. Wait, THEY'RE REALLING BRANDING A LIVE ANIMAL?! "The Next Day" Hart complains he's hungry and wishes for a McDonald's. Whoops, sorry, a "Mac Donald's." He starts singing "Eat Your Heart Out Rick Springfield" but Funk wants nothing to do with it. HA. Suddenly, we see Hart claiming he found gold, but Funk says it's feels gold and shows off a piece of meat that Funk suggests came from the calf he just branded. If Jimmy's going to be a girl about it, he can eat beans while he eats the steak.

- We come back from commercial, Jimmy Hart bloats about having a big surprise for the Junkyard Dog, and that manifested in the form of Terry's brother, Dory. We get highlights of Funk vs. The JYD from the February 15th episode of Championship Wrestling. Back in the studio, Terry paints a picture that he was a victim and that the JYD's actions were uncalled for. Vince says Dory is as much of a cowboy as Terry and basically calls him a coward.

The WWE Network has his name listed as "Sivi Afi", and wouldn't you know it, McMahon calls him both "Superfly Afi" and "Sivi Afi." He comes out with some standard Fiji attire and gives them a little dance. I don't know if this is going to get him any more over while being a knockoff Jimmy Snuka. Everyone in the crowd cheering probably has a gun to their head.

- Highlights of Superfly Afi making his entrance at Madison Square Garden. He comes to the ring with a stick of fire and if only he was spitting flammable liquid at it, we'd be predating "The Dragon" gimmick by a solid 5-years. That is such obvious canned babyface reactions its not even funny. HOW COME THEY DIDN'T FIX IT FOR HIS MATCH ON CHAMPIONSHIP WRESTLING.

- Afi is such an interesting guest, McMahon randomly brings up Alfred having an injured arm, and sure enough, he's wearing a cast underneath his left sleeve. McMahon asks about Afi's time so far in the WWF and turns that into a joke at Alfred's expense. Wow, this might've been the lamest guest of 1986. This vacuum of charisma was meant to replace JIMMY SNUKA.

With the taste of Superfly Afi and Boxing Bob in my mouth, anything is a refreshing palette cleanser, especially Heenan. McMahon calls him a "peculiar individual" that reminds him of a certain animal, which draws the ire of Heenan from behind the curtain in a funny little bit. He's wearing a USA Network/TNT windbreaker and says he's doing it as an act of goodwill, and he's repaid by being called an animal. Heenan quips that Alfred must've got his hand caught in the cash register.

- Highlights of an enhancement talent being stretchered away from ringside, courtesy of King Kong Bundy.

- Heenan insists on seeing the replay again, liking it to Jell-O, because there's always room for more. McMahon asks if Heenan has ever fantasized about Hulk Hogan being crushed underneath Bundy, which causes Heenan to grab the LJN figures and play out the action, including draping the WWF Heavyweight Championship belt around Bundy's waist. "How likely is that to happen?" "On a scale on 1-10, it's more likely than Hogan putting his name on the contract and stepping in the ring with Bundy."

We've only a few minutes left, so this shouldn't be much of an appearance. Now McMahon has the JYD figure on his desk. He shows off a photo of the JYD and Arnold Skaaland on a tour from Australia. What that has to do with anything, I don't know.

- Highlights of The Junkyard Dog and Danny Spivey in Tag Team action. We don't even get to see the finish.

- Back in the studio, McMahon brings up what happened between the JYD and Funk Brothers. He compares Jimmy Hart to a flea hanging on to the dog. He doesn't understand why Dory got involved, and just like that, McMahon wraps up the segment.

- Jimmy Hart storms the set and demands everyone vote for him in the Slammy Awards.

Final Thoughts: This was such a nothing episode once we got past the segment with Terry Funk, with a lot more emphasis on footage in the can from other broadcasts, and all other guests ushered in and out quicker than usual. One of the most skippable episodes of TNT I've seen so far (to be fair, I've only watched maybe 25 episodes of the entire run).