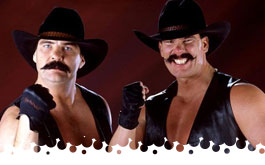 Welcome to the new era of Shotgun Saturday Night! Yes, I know the show openly premiered at the beginning of January. After running six shows across the country in night clubs and even PENN STATION (I almost typed Penn State, not going to lie), they ran a "Best of" episode on February 15th, and now Shotgun is being taped along with Monday Night Raw. The content featured here would also be used to fill "Sunday Morning Superstars" on the USA Network until the show was discontinued (in the form we knew it) in mid-March.

Taped on February 17th, from the Nashville Arena in Nashville, TN. Vince McMahon and Jim Cornette are calling the action, unless otherwise noted.

Cornette compares Mason to Don King (notoriously sleazy promoter), saying Mason is trying to get a piece of everyone. Technically, Mason is still managing Owen and the Bulldog ("Drink's tea at three"), on top of being the manager of Crush ("Hangs out behind bars") and the rest of the Nation of Domination. Sure enough, Mason is trying to play both sides. Bulldog encourages the crowd to chant "Jail bird" at Crush. Lockup into the ropes and Crush gives a clean-ish break. Bulldog with a side headlock but a shoulder tackle barely has any effect. Crisscross and Bulldog with a shoulder tackle, followed by a pair of dropkicks that send Crush to the floor. Back inside, Bulldog with an arm drag into the arm bar. The rest of the Nation make their way to ringside as we take a break. When we come back, it's Crush taking control with a piledriver. Meanwhile, Owen Hart finally comes to ringside to support his brother-in-law. He seems more concerned about the placement of his Slammy and makes nice with Mason. Crush cuts off a comeback with a belly-to-belly suplex for a near-fall. Bulldog fights out of a nerve hold but runs into a big boot. OH NO, Owen's Slammy fell off the steps and disassembled. Crush with a back breaker for two. He hooks a body-scissors and gives it up almost immediately. Crush makes the trip to the middle rope and misses a flying fist drop. Bulldog with a series of right forearms and a terrible swinging neck breaker. Whip to the ropes and the Bulldog with a pair of clotheslines, followed by the delayed vertical suplex. Another clothesline sends Crush over the top rope. He brings him in with a suplex but Savio picks the ankle and holds the leg down, allowing Crush to fall on top for three at 8:20 (shown). Post-match, the Bulldog grabs the microphone, demanding Clarence Mason give him answers about his loyalty. Owen tries to play peacekeeper, but Bulldog isn't listening to it and public FIRES CLARENCE MASON. Finally, we were long over-due to split this bizarre relationship. Match wasn't much, but it was watchable. *½

The WWF is promoting the return of Sugar Ray Leonard vs. Hector Macho Camacho. I guess they didn't learn their lesson when promoting boxing in 1988. For those who care, Camacho handed Leonard his only loss by KO, and officially ended Leonard's boxing career.

No Marlena at ringside with Goldust ("He's no broad...way"), as we recap the series of attacks at the hands of that "Amazonian" Woman. I'm surprised to see Hopper ("Has pipe dreams") is still plumbing around, but this is his penultimate TV appearance after doing some quick research. Cornette says the woman just got off the Russian women's skating team. Lockup and Goldust snaps Hopper over with an arm drag. Goldust with a standing side headlock and a shoulder tackle. Cornette says mind games won't work on Hopper because he doesn't have any of the pieces. Hopper drives a series of shoulders to the midsection and unloads with right hands. Whip to the ropes and Goldust comes back with the drop-down uppercut. He comes off the ropes with a diving clothesline for two. Snap mare and Goldust hooks a chin-lock. McMahon promotes the new issue of Raw Magazine, featuring not only Goldust and Marlena on the cover, but Jim Cornette in his underpants. Goldust remains in control, taking Hopper down and hooking an arm bar. Hopper pounds away in the corner but Goldust quickly cuts him off and finishes with the Curtain Call at 4:39. Just a squash match for Goldust.

Highlights of the circus surrounding Bret Hart defending the WWF Championship against Sycho Sid on the recent edition of Monday NIght Raw. After two attempts and failures to get the match started, the third time was a charm, and thanks to the interference of Steve Austin, Sycho Sid won his 2nd WWF Championship, ending Bret's reign after only 24-hours with the gold. In a "Shotgun Exclusive", Bret Hart is seen backstage in a less than pleasant mood. That 10-seconds was the biggest disappointment since Leonard vs. Camacho.

Kevin Kelly is standing by for an interview with Sycho Sid. Wow, they're giving us some high-quality exclusives. Kelly calls Sid the most physically impressive Champion in WWF history. They're still doing the gimmick where Sid's music is playing during the entire segment. Sid makes sure to whisper part of his promo with the music blaring. Good call, buddy. He compares preparing for the Undertaker to playing hide-and-seek and being stuck in darkness. He was never afraid of walking through cemetaries, and isn't bothered by the Undertaker's head games.

COME ON, MAN! How many times am I going to suffer watching these two teams on Shotgun?! I guess Judd is the country music version of Weird Al. Hurrah for us. What a pointless appearance. The Headbangers "Love to brainstorm" and the Godwinns are "Not the Baldwins" is our clever subtitles, so you can see how lazy I'm feeling about squeezing those jokes into the recap. Phineas and Mosh start by doing shtick. Mosh from behind with a knee to the back, followed by shoulders to the midsection. Whip is reversed and Phineas hits a mule kick to almost zero reaction. Henry and Thrasher in now. Thrasher unloads with rights but Henry catches him off the ropes with a clothesline. Suddenly, Bradshaw and Windham, the NEW BLACKJACKS, run in and work over the Godwinns, and it's a DQ finish at 1:25. Thanks for wasting my time.

The New Blackjacks vs. The Headbangers:

Who doesn't love impromptu heel vs heel matches?! Bradshaw nails Mosh with a big boot and a lariat. Whip to the ropes and the Blackjacks with a double clothesline. Mosh trips up Windham as Cornette says that Bradshaw is the SON of Lanza. At least Windham being the son of Mulligan is true. Whip and the Headbangers with a double boot and snap mare. Bradshaw comes in to help his partner and we've got all four men brawling as the referee stands there like a goof. Bradshaw with a pump-handle slam on Mosh, followed by a series of elbow drops. Here comes the Godwinns, and we've got ANOTHER DQ finish at 2:17 as the Blackjacks bail out, letting the Godwinns and Headbangers fight. What was the point of these two matches? This was the in-ring debut of Windham and Bradshaw as the Blackjacks, and man they had little chemistry, so it could only get better, right?

Dok Hendrix is standing by for some local promotional videos. Monday Night Raw returns to the Manhattan Center on February 24th, with The Undertaker, Ahmed Johnson, Goldust, and the Nation expected to be in attendance. The WWF also returns to Madison Square Garden on March 16th. The Undertaker faces Vader in a Casket Match, Bret Hart battles Steve Austin in a No DQ Match, and Shawn Michaels defends the WWF Title against Sycho Sid inside a Steel Cage. I don't think they bothered to film an updated version, considering what went down in the last 10 days.

Highlights of Jerry Lawler issuing the challenge for representatives of ECW to appear next week on Monday Night Raw, with the challenge accepted by none other than Paul E. Dangerously.

Final Thoughts: Shotgun continues to offer little when it comes to quality in-ring action. At least under the original format, you had unique settings for the action, so even when the wrestling was bad (which it often was), the spectacle of the environment made it a bit more watchable. Now It's the same matches taped in front of a dead arena crowd. I guess we should be thankful for first-run storyline development, like Bulldog firing Clarence Mason and the in-ring debut of the Blackjacks, but overall, not the most enjoyable 45-minutes.