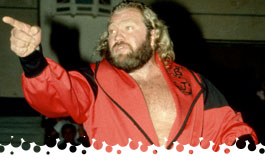 - Hosted by "Mean" Gene Okerlund in the WWF Sports Control Center (DIG THAT UNNECESSARY CAMEO OF KEVIN DUNN), it's the day of WrestleMania and we've got a hot show this week, including a feature match of The British Bulldogs taking on Barry O and Rene Goulet. Also, this week, Max Maxine, Big John Studd, and Greg Valentine are here, as well as an edition of Piper's Pit. Did I mention WrestleMania is taking place at 1 p.m.? What are you doing home, watching this?! GO TO YOUR LOCAL CLOSED-CIRCUIT AREA AND WATCH WRESTLEMANIA (unless you're one of the few people who had the limited access to something called "Pay-Per-View.").

I love how the featured match is recycled from All-Star Wrestling, the March 23rd episode to be exact. The Bulldogs (Davey Boy Smith and the Dynamite Kid) briefly worked for the WWF in the Fall of 1984, and this is their first match back on TV. Wait... didn't we see Barry O fight Rene Goulet at MSG?! What nonsense is this?! Dynamite and Goulet lockup, with Goulet taking him over with an arm drag and working the arm. Kid with a nip-up and counters with a hip toss, sending Goulet across the ring. Dynamite with a bridge and monkey flip. Barry O tags in and gets snapped over with an arm drag. Davey Boy in, grabbing a side headlock. Whip to the ropes and Davey Boy with a shoulder tackle, followed by a hip toss. Both men miss elbow drops and Davey Boy grabs an arm-bar. Dynamite with a headbutt and a scoop slam for two. Snap mare into a crucifix cradle for another two-count. Dynamite with a gut-wrench suplex on Goulet, followed by a missile dropkick. Barry O rushes in and gets a missile dropkick from Davey Boy. Crisscross and O surprises Dynamite with a diving clothesline. He misses a fist drop, allowing Davey Boy to tag in. He plants Goulet with a running power-slam, picks Barry O up with a fireman's carry, and Dynamite launches himself off the back of Barry O with a diving headbutt onto Goulet for three at 4:08. Make that another act added to the WWF to bring the excitement level up when it comes to in-ring ability.

- WWF Update with Lord Alfred Hayes (this is a WWE Classics version, so there's no blatant ripping off Michael Jackson's music). The Junkyard Dog may love to dance, but he can be deadly in the ring. We get a montage of him dancing with "Grab Them Cakes" dubbed over whatever the real music was (He was using "Another One Bites the Dust", so maybe that was used for the segment).

- Big John Studd vs. Jim Young from the March 16th episode of Championship Wrestling is featured, with the highlight being Andre the Giant running in on the match and walloping Studd.

- "Mean" Gene standing by to run down some of the card for WrestleMania, and we toss it to an interview with Cyndi Lauper and Wendi Richter. Will lightning strike twice in the same building? Lauper calls Moolah a chump and says she's going to keep Moolah out of the ring, and that Leilani isn't half the woman that Wendi is.

An EXCLUSIVE to All-American Wrestling, taped on March 5th from Poughkeepsie, NY. Maxine is a legit 6'0" tall and a former college basketball player, rocking a greenish-blue mohawk. Maxine lunges for Starr, but Starr ducks out of the way and cradles Maxine for barely a one-count. Lockup and she tosses Starr across the ring. Starr with a drop toe hold and crosses the ankles with a leg-lock. Maxine kicks her off and takes Starr over with a monkey flip. Maxine with a double choke-lift and slam. I can tell there's more green about Maxine than her hair color. Maxine with a suplex for three at 2:44. That's it? Moolah and the referee are clearly directing her to LOOK AT THE HARD CAMERA as she celebrates. Moolah in Maxine's corner seems to indicate Maxine will be the next threat to Wendi Richter, but things didn't pan out, and Maxine's in-ring career didn't last very long, working in journalism and photography after she left the ring. She did pop up years later to bury Moolah during the controversy over naming the Battle Royal after her for WrestleMania 34.

- Piper's Pit, with no special guests, just more WrestleMania hype from himself, Orndorff, and Orton. He grabs a toilet seat and puts it on the WrestleMania poster of Hulk Hogan and Mr. T. Orndorff offers Mr. T a banana and calls him a monkey. "We don't want to leave them with egg on their face" says Piper as they crack eggs onto the poster. Piper says these are the heroes people look up to. Orton says his arm is still hurting as he uses the cast to knock over the entire set.

- We're on location from New York City (a.k.a. "Hulk Country") with Hulk Hogan and Mr. T doing more training. Hogan points out the Empire State Building and the World Trade Center. Mr. T wants to see Central Park to get some muggers and jump on them like they're Piper and Orndorff. Hogan and T are next seen jogging and phantom punching "SLOW AND MEAN". Now the icing on the cake, they need the eye of the tiger as they hit the gym (and more stock music playing over what was likely "Eye of the Tiger").

- "Mean" Gene Okerlund runs down the major matches for WrestleMania (Hogan/T vs. Orndorff/Piper, Andre vs. Studd, Rotundo/Windham vs. Sheik/Volkoff, Richter vs. Leilani, and JYD vs. Valentine). No mention of the prelim matches, but we do know Sammartino vs. Beefcake is happening, and on TNT, McMahon noted "all 9 matches have been signed".

From the March 30th episode of Championship Wrestling. Valentine's entrance is edited out because he comes to the ring to "Turn Up the Radio" by Autograph. That couldn't have lasted long, since I have no other recollection of him using music until much later in his run. Valentine starts with a knee to the midsection, followed by a pair of elbows to the top of the head. Valentine with a slam, then works over Pompeii with a chin-lock. The scrub fights free with shoulders to the midsection, but Valentine lays him out with a knee to the face and tosses him out of the ring. Valentine works over Pompeii while hanging out on the apron, then brings him back in the ring for more punishment. Valentine with a snap mare, and he slaps on another chin-lock. Pompeii with another mild comeback, but Valentine quickly snuffs it out, and takes him over with a suplex. Valentine picks him up at a two count. Valentine with a stomach buster and choking, as Jimmy Hart argues with a mark at ringside. Valentine goes to the legs. Valentine with a slam and second rope elbow drop, and the Figure-Four finally ends this one at 4:35. Could've used a little trimming.

- "Mean" Gene standing by for more WrestleMania hype (this is the THIRD time he runs down the card in this hour-long program). The show is NOT available on Cable TV. Lou Albano joins Okerlund for comments on the upcoming Tag Title Match. They expect a rough and tough match, but they can walk out victorious. Windham and Rotundo join the scene with belts in hands. Rotundo hopes they show this match in Iran because the Sheik will be "our hostage on that day... this afternoon." Okerlund already corrected him once that the show "is today." They couldn't do another take?

- "Mean" Gene runs down the card AGAIN. Oh my God, I know it's called hard-sell, but this is too much, especially since All-American ran either late in the morning or around noon, meaning the show begins likely as soon as this broadcast ends! Gene hypes next week's show, including the team-up of Jimmy Snuka and Ricky Steamboat, as well as The Magnificent Muraco in action against "Quick Draw" Rick McGraw, and The Anvil vs. S.D. Jones taped from MSG. Sorry, I don't have this episode, and will likely have to jump around a bit as I cover more 1985.

Final Thoughts: Go watch WrestleMania! Oh, and we got the in-ring debut/return of the British Bulldogs and Mad Maxine, but seriously, this was all about pushing WrestleMania as much as possible in a one-hour block.