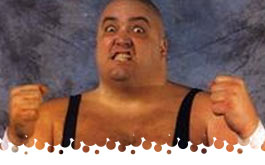 - Taped from the Mid-Hudson Civic Center in Poughkeepsie, NY on March 5th, 1985. Vince McMahon and Bruno Sammartino are calling all the action. Again, I must point out the blatant use of "Thriller" (well, the instrumental version), which has me wondering when they decided to create their own music. This week will have a special training session with Piper and Orndorff that Vince says could be called a lollapalooza. WHERE DID THAT CAME FROM? Also, this week, Big John Studd is in action, taking the spot of Andre the Giant who can't find competition because everyone is too afraid to fight him. We'll also see King Kong Bundy and Ricky Steamboat.

Still no mention of "U.S. Express." I swear, they were called that at one point. They do come out to "Born in the USA." According to old issues of the WON, Vince loved the song and that's how Rotundo and Windham got the push. Rotundo starts with Brooks. Lockup and Rotundo's attempt at a waist-lock finds them in the corner, forced apart. Lockup and Rotundo with a pair of arm drags. Rotundo with an O'Connor Roll, but it can't keep the big boy down. Windham with a dropkick to the face of Rusty. Gibbs tags in looking like someone's disgruntled dad time-warped from 1957. Crisscross and Windham with a sunset flip for two. He plants Gibbs with a slam and drops a leg. Rotundo goes to work with a side headlock. Brooks loses a slug-fest and plays over-sized ping-pong ball in the corner. Rotundo with a slam of the big man, followed by an elbow drop. Whip and Rotundo with a dropkick. Windham in, finishing with the bulldog at 2:55. Rotundo and Windham's squashes have been some of the more entertaining in the early weeks of 1985.

- WWF Update with Lord Alfred Hayes (brought to us by Castrol). Wendi Richter is looking to regain the Ladies Championship from Leilani Kai. These "Updates" are awful compared to what I remember from when I started watching.

- WrestleMania Commercial, set to the tune of "Easy Lover" by Phillip Bailey and Phil Collins. Closed Circuit tickets are available at the Boston Garden, Worcester Centrum, Plymouth Memorial Building, Lowell Memorial Auditorium, and City Hall Auditorium in Portland, ME, among others.

Steamboat is introduced simply from "Hawaii" and no, he's not "The Dragon" yet. This is Steamboat's first appearance on Championship Wrestling, not far removed from a solid run with Jim Crockett Promotions. Vince LOVES calling him "The Steamer." Lockup into the ropes and STEAMBOAT with the shove after a long stare-down. Crisscross and Steamboat with a dropkick, followed by his signature deep arm drag into the arm-bar. Whip, Steamboat ducks an elbow, and comes off the ropes with a body press for two. Steamboat fights out of a knuckle-lock and puts Lombardi on his butt with a dropkick. Lockup to the ropes and Lombardi rakes the eyes. Whip and Lombardi with an elbow. He tosses Steamboat, but Steamboat skins the cat back in, hits a pair of dropkicks, and finishes with the flying body press at 3:14. That's two entertaining squash matches, thanks to importing new, fresh talent that had more mobility than a broken-down RV.

- "Mean" Gene Okerlund is standing by to promote the WWF coming to the Boston Garden on March 23rd. On that card, Hulk Hogan, with MR. T in his corner, defends the WWF Heavyweight Title against The Magnificent Muraco, who has Mr. Fuji in his corner. WrestleMania won't be a distraction to the Hulkster. He says he hired Mr. T to a 1-year contract as his personal bodyguard, with a 1-year option if he performs well. If Fuji tries to take a cheap-shot, Mr. T will get right-up in his face.

The in-ring debut of King Kong Bundy, wearing a pimpin' cape and sunglasses. McMahon notes Mario is of no relation to Boom-Boom Mancini. That's a look that would be dropped almost immediately for him. Lockup and Bundy tosses Mancini into the ropes. Bundy with a clubbing blow across the chest. Whip to the ropes and a lazy shoulder tackle knocks Mancini down. Whip and Bundy changes it up by throwing an elbow this time. He chokes Mancini down in the corner. Whip across the ring and Bundy squashes Mancini with an Avalanche for three at 2:07. Post-match, Bundy drops an elbow on Mancini and demands a FIVE COUNT. Complete dominance from Bundy.

- "Mean" Gene is back to promote the Boston Garden show, this time joined by The Magnificent Muraco (sans Fuji). Muraco compares himself to a shark hunter, filling the sea with chum, waiting for Hogan. Muraco says Hogan may be busy being a star, but he's not busy being a man. He warns Hogan to not look one-step past his (Muraco's) "ugly face."

- "Mean" Gene is on location for an interview with special guest announcer BILLY MARTIN. He's excited to be part of the show.

Studd is still carrying the bag of Andre's hair and (allegedly) $15,000 in cash. Young goes for the slam, but Studd doesn't even budge. Young with a dropkick and another slam attempt, but Studd counters with a forearm across the back. Whip and Studd with a clothesline. Studd scoops Young up and drops him across the top rope. He covers but keeps pulling Young up at two. Suddenly, Andre the Giant makes his way to ringside, causing the crowd to erupt. THE JACKET IS OFF! Andre gets in the ring but Studd cuts him off with clubbing blows. Andre quickly fights him off with a chop and headbutt, knocking Studd to the canvas and retreating to the outside. I guess this is a No Contest at the 1:00 mark. Things will be settled (maybe) at WrestleMania.

- Piper's Pit with Johnny Valiant and Brutus Beefcake. Piper asks them about David and Bruno Sammartino. According to Piper, they're negotiating a contract to get the Sammartino's in the ring. Beefcake takes credit for breaking the leg of Hillbilly Jim. Neither Valiant or Beefcake say much of note, which explains why this one never made it to the greatest hits of Piper's Pit.

- "Mean" Gene is on location again, this time to get the inside scoop at the Mid-City Health Club (FOR MEN) where Roddy Piper and Paul Orndorff are preparing for WrestleMania. He walks in on Piper and Orndorff meditating, with Piper rocking back-and-forth like a junkie that needs his fix. Okerlund tries to get a word from Piper and Piper HISSES IN HIS FACE. "This borders on being psychopathic" says Okerlund. Orndorff seems a bit more subdued than Piper and chastises Okerlund for interrupting their training. Orndorff calls Mr. T "black scum." Thank God wrestling has evolved from these tasteless insults, almost exclusively coming from Orndorff. We move on to the weight room, which looks more like the proper training setting for a big match. Orton says this is supposed to be a closed workout, and Gene is breaking their concentration. Piper tries to intimidate Okerlund, smacking a weight belt across his hand. They toss Gene out of the gym, and randomly beat up an innocent bystander. This has been some great build-up.

Richter comes out to "Girls Just Wanna Have Fun", of course, but is without Cyndi Lauper and David Wolff. Richter tackles Lee into the corner and gives her a pair of shoulders to the midsection. Richter picks the leg, but Lee kicks her away. Richter goes for the leg again and turns Lee over with a single-leg crab. Wendi drags Lee away from the ropes and continues to work the legs. Lee grabs the hair to break Richter's momentum and decks her with a forearm across the chest. Richter fires back and hits her with more shoulders. She plants Lee with a slam and covers (with a splash) for two. What was with that splash cover and thank God no one else does it in the modern era. Lee with a knee to the head for two. Richter with a small package for two. Richer with a series of hair mares into a cover for one. Whip is blown, as is the following spot where Richter gets a phantom blow to the midsection. THEY BOTCH ANOTHER IRISH WHIP and Lee with a headbutt to the midsection. The ugliness continues with sloppy spots. Lee meets knees going for a splash. Richter with a sunset flip to finally end it at 4:56. This was not a good match.

- "Mean" Gene is standing by to hype WrestleMania, running down part of the card and some of the celebrities that are involved in the show. We throw it to a taped interview with Hulk Hogan and Mr. T that was recycled on other shows and covered elsewhere.

- Bruno Sammartino says that he and David will avenge Hillbilly Jim for what Brutus Beefcake and Johnny Valiant did as the show comes to a close.

Final Thoughts: More hype for WrestleMania, including the tease of a match between Beefcake and David Sammartino, but as important as that was the debut of two significant additions to the WWF roster, Ricky Steamboat and King Kong Bundy. Will they be involved at WrestleMania? We'll see in two weeks.