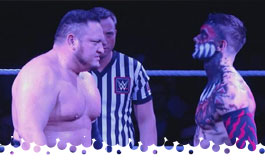 From London, England. Our hosts are Rich Brennen, Corey Graves, and Byron Saxton. This is courtesy of Hulu, and NOT the WWE Network, which I've happily been unsubscribed from for about a month.

-Just like in Brooklyn, the lights go up to reveal Triple H in the ring, ready to soak in the adulation. He cuts a heated promo, putting over how important it was for him to be in London despite Roman Reigns kicking his ass. Wow, this is more continuity than we usually get on weekly WWE main roster television.

Asuka vs. Emma (with Dana Brooke)

As you could probably guess, the London fans are totally jazzed to be at this show and give Asuka a megastar reaction. They aren't so smarky that they can't boo Emma during her entrance. Bell rings and Emma barely dodges a roundhouse kick. Emma avoids a drop-kick, but Asuka reverses her hammerlock. Emma throws an elbow but gets twirled into a nice armbar. Asuka nails a leaping "hip attack" off the apron and licks her fingers for the camera. Dana Brooke distracts long enough for Emma to drop-kick Asuka off the ring frame. Asuka gets beaten down for a few minutes (while the fans sing her name to the "Ole" tune) and makes a spirited comeback. Emma cuts her off to a "This is wrestling" chant. Dana Brooke's smack-talking seems to revive Asuka, who counters with a missile drop-kick. Asuka goes into a kicking frenzy but Emma blocks and applies a jackknife cover for 2. Asuka lights Emma up with strikes and nails a running Hip Attack for a near fall. Emma stays alive with the Dil-Emma and Butterfly Suplex into the turnbuckles. Running splash by Emma gets a believable near fall. Asuka reverses into an Ankle Lock and follows with a German Suplex! Emma takes a Shining Wizard but kicks out! Emma bumps Asuka into the ref, allowing Dana to hand a leather strap to Emma. Asuka fights for the strap and the referee wakes up to see her with it. Emma sneaks in a cover, but Asuka reverses into the Asuka Lock! Dana distracts the referee while Emma taps. Just when I start to think Emma is going to pull off the cheap victory, Asuka nails a roundhouse kick for the win at 14:45! Wow, I was expecting a pretty-good-to-solid opener, not a balls to the wall competitive match with a bunch of interesting false finishes thrown in. Great way to start the show, ***1/2.
Winner: Asuka

-On the last episode of NXT TV, Enzo and Cassady were too fired up to do their usual catchphrase montage, but being in front of a fresh London crowd has improved them moods. The fans are more than happy to recite the promo along with them.

I'm always impressed with how quickly NXT stars can transition from being enhancement talent to fully fledged superstars and title contenders. Dash and Dawson are the most recent examples and seem more over now than they would have if they'd just been green rookies winning a bunch of bland squash matches (looking at you, Baron Corbin). The enthusiastic fans sing a soccer chant in honor of Enzo, who quickly gets caught by the champs. Cassady gets a tag and uses his size advantage to trap Wilder. Enzo smashes Wilder's shoulder into the ring post and capitalizes on the injury. A personalized soccer chant keeps Colin motivated as he tosses one champ onto the other. Colin throws Enzo over the ropes, wiping out Wilder and Dawson in spectacular fashion. Despite the effort, Enzo gets trapped as the face in peril. Enzo suffers a lot of abuse but still manages a leaping DDT counter and Cassady storms in from a hot tag. Cassady's hot streak ends when the back of his knee is knocked out from under him. Wild applies a grapevine ankle lock but Cassady gets the last second rope break. Enzo shoves Dawson off the top rope, and Colin rolls Wilder up for a near fall. Big Boot by Cassady and the Enzo splash would have ended it, but Dawson pulls his partner to safety. The crowd is majorly worked up over that. Carmella slaps the champs around, but Dawson tosses Enzo off the top rope into Wilder's Codebreaker for the pin at 14:53! Another match that surpassed my expectations by leaps and bounds. Lots of twists and turns in the third act elevate this one to ***.
Winners and still NXT Tag Team Champions: Dash and Dawson

There's a bunch of scattered attempts for chanting early on, but the crowd has mostly died down for this one. Corbin stalls for time after getting knocked down. Corbin absorbs some shoulder blocks and takes control with methodical offense. Crews gets back dropped over the ropes and has a hideous landing on the ring steps! Corbin shouts that Crews should have stayed in Ring of Honor (it was DGUSA/EVOLVE, you n00b). I sort of like Corbin's heel character playing off internet fan resentment, maybe he and Eva Marie should pair up. I can't understand the new fan chant directed at Baron while he pounds on a dazed Crews, but it doesn't sound friendly. A much clearer "F*ck you, Corbin" chant sends the censors into a frenzy. Crews attempts a comeback but gets whipped hard into the turnbuckles. Corbin stretches Crews over his knee as the fans almost totally turn on the match. Crews comes back to life, taking down Corbin and delivering a punching frenzy. Crews nails a moonsault off the apron. Baron counters with Deep Six for a 2 count. Crews blocks End of Days and delivers a standing Moonsault for a near fall that had me fooled. Baron avoids a powerbomb and hits End of Days for the win at 11:35. This was rough to watch, as the fans had no patience for the still-learning Corbin, and the match dragged on much longer than necessary, *.
Winner: Baron Corbin

-The excellent Sami Zayn comeback video that aired on NXT TV is played again. Zayn was the best thing going on in WWE in 2014 and missed more than half of 2015. If he can stay healthy, I don't see any reason why he can't rule 2016.

-Nia Jax interview. She is quickly interrupted by Asuka, who just flashes her trademark smile and strolls off. Nia vows to dominate and destroy Bayley. Well, I highly doubt she's going to "destroy" Bayley, as that would involve murder, and that sort of thing is highly frowned down upon in publicly traded companies.

-Video package putting over how awesome Bayley is. I'm preemptively frustrated and annoyed by just how badly she's going to be treated when she reaches the main roster. There's no point in being optimistic and hoping that Vince, Kevin Dunn, and co. will appreciate the unique opportunity to print money with her. I don't mean to be this pessimistic, but they've botched Sasha Banks, Becky Lynch, and Charlotte, so I'm all out of good-will.

Nia is basically getting this title shot because she's big and scary and all the top tier NXT women got sent packing to the main roster wasteland. This match will be an interesting test for Jax, whom I haven't been terribly impressed with in her first few months of squash matches. The fans simply cannot wait to start singing for Bayley. It doesn't take long for Nia to catch Bayley in mid-air and start tossing her around like a rag-doll. Bayley leaps into a Dragon Sleeper, but gets knocked off. Bayley cuts Nia down for a drop-kick to the face. A pair of flying elbow shots can't knock Nia down, and Bayley gets swatted down awkwardly in a third try. Bayley counters into a top rope senton but Nia kicks her out to the floor. Nia takes Bayley to Samoan Drop City but can't get a 3 count. Bayley gets demolished for several minutes before countering into another Dragon Sleeper. There's a hush in the building as Nia slams her off, but Bayley reapplies the hold. Sadly, Nia again slams Bayley out of the hold, but sells the damage that's been done. Bayley amusingly applies the Dragon Sleeper a third time, and takes Nia off her feet. Bayley wrenches back with all her might and Nia taps at 13:18. Nia might still be limited, but she and Bayley did the best they could considering the circumstances. The good news is that the hot crowd adored Bayley from beginning to end, and bought into her underdog comeback story, allowing them to scratch the *** mark.
Winner and still NXT Women's Champion: Bayley

-Video package highlighting Samoa Joe snapping and attacking his "friend of 10 years" Finn Balor. This sounds a touch too similar to what they did with Zayn vs. Neville, and then more so with Owens vs. Zayn, but if they're going to rehash angles, then at least they're doing it with a good one.

I've waited 13 years to see Samoa Joe main event a major show in front of a sold-out arena and it almost brings a tear to my eye. Almost. Finn Balor shows up in full demon gear, supported by a fancy Jack the Ripper entrance video and get-up. Balor scores the first major shot, dropping Joe to ringside for a missile drop-kick and soccer kick. Finn attempts a Coup de Grace on the ring steps but injures himself when Joe moves out of the way. Joe is free to unload his bag of tricks, striking Balor into place for a leaping enziguri. Joe wipes his boot on Finn's face on his way to the running head kick. Joe boots Finn into a Spinebuster but misses the back senton. Balor attempts a springboard but Joe chops him to the floor and wipes him out with a suicide dive! Joe powerbombs Finn and flips him over into the Boston Crab, leading to a crossface. Balor counters with a DDT and makes a stiff comeback. Balor hits a flipping dive to the floor! Double stomp to Joe's back only gets a 2 count. Joe blocks a drop-kick and hits the back senton he'd missed earlier. Balor reverses the Muscle Buster into a roll-up and knocks Joe down again with a Pele Kick. They exchange stiff shots and Finn escapes to the ropes when facing the Coquina Clutch, and a Double Stomp leaves them both down for a rest. It takes two Sling Blades and multiple drop-kicks to get Joe off his feet again. After a top rope struggle, Balor hits the Coup de Grace for the win at 16:18! An amazingly physical war with logically timed high spots and refreshingly NOT relying on finisher kick-outs to provide all the drama. A straight up pure ****1/2 thrill ride.
Winner and still NXT Champion: Finn Balor

Final Thoughts: NXT's winning streak continues with another satisfying two hours of great professional wrestling action and intrigue. NXT is better than Ring of Honor. It's better than New Japan. NXT isn't even on the same planet as TNA. And yes, NXT is much, MUCH better than WWE's Raw and Smackdown offerings. That's my final word on this show and NXT's stellar 2015.