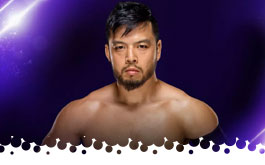 - Last week on 205 Live, Mustafa Ali defeated Tony Nese in the Main Event, despite the attempts of Buddy Murphy to interfere on Nese's behalf... The Lucha House Party literally stole a victory from the trio team of Drew Gulak, Jack Gallagher, and THE Brian Kendrick... Akira Tozawa won an enhancement showcase to build momentum... Lio Rush is still coming to 205 Live... TJP is still teasing leaving 205 Live... Drake Maverick caved under pressure from Ali and Murphy to make a Triple Threat Match with them along with Hideo Itami.

- We recap the events of the last couple of weeks with Mustafa Ali, Buddy Murphy, and Hideo Itami. As we found out to close last week's episode, tonight's Main Event is a Triple Threat Match featuring the previously mentioned Superstars.

- Presented LIVE on the WWE Network from Toledo, OH. Tom Phillips and Percy Watson are calling the action, unless otherwise noted (Joseph and McGuinness are "on assignment" to work on the U.K. Tournament).

Gallagher is not at ringside since he's advanced in the U.K. Tournament. We see highlights of last week's trios match, where Dorado pulled the tights to pin Gulak. 50/50 Booking coming up. Phillips abbreviated the Lucha House Party to "LHP" so now I feel less cool about using it. The LHP once again come out with the Gulak Piñata and it's called Penelope for whatever reason. Lockup and Gulak with a side headlock takeover. Dorado escapes a hammer-lock with a snap mare but runs into a shoulder. Gulak with a bridging cover for two. They fight over a knuckle-lock until Dorado takes him over with a sunset flip for two. School boy roll-up for two. Gulak with a headbutt to the midsection. Dorado pushes him out of the corner to create separation and hits a springboard moonsault for two. Dorado blocks a right hand and tries to walk the ropes but Gulak straddles him and dumps him to the floor. Gulak drags Dorado by the mask and stomps him down in the corner. Dorado rallies with a series of right hands. Gulak uses the referee's distraction to grab the tights and throw Dorado backwards through the ropes. Back inside, Gulak slows things down with a chin-lock. Whip to the corner and they bop heads in the center of the ring. Dorado with rights and a pair of dropkicks. He connects with a leg-trap heel kick and roundhouse kick from the apron. Dorado with a flying body press for two. Dorado with the Springboard Stunner (called a Golden Rewind) but Kendrick puts Gulak's foot on the bottom rope. Kendrick with blatant interference, allowing Gulak to hook the Gu-Lock for the tap-out at 8:03. That's a tap-out victory over all three members of the LHP, for the record. Decent match but felt like it wasn't meant to be much more than that. **

- Drake Maverick meets up with Hideo Itami backstage and tells him to be professional and talk to him like a man instead of going into business for himself. Hideo Itami constantly talking about respect reminds me of those goofy Kaientai promos where they were overdubbed and ended with "Indeed."

- TJP comes out for a scheduled match. I sense another half-hearted squash where TJP arrogantly sleepwalks through the less-than-ideal competition. TJP comes out with a microphone, complaining about being wasted talent. He says he belongs in the Main Event every week, but he gets to fight no-name underdogs. The opponent doesn't take kindly to the insults and knocks TJP on his ass. TJP responds with a leg-trip into the knee-bar, and the guy taps out despite the match not officially starting.

- We get an update of Drake Maverick signing Lio Rush to his official 205 Contract. He's going to make his 205 Live Debut NEXT WEEK (allegedly. I feel like he's going to pull an MVP and make bigger demands along the way). Also scheduled for next week: The Lucha House Party face Drew Gulak, Jack Gallagher, and THE Brian Kendrick in a Six-Man Tag Team... ELIMINATION MATCH.

I'm traditionally not a fan of Triple Threats (or multi-man stuff in general, since it gets sloppy and occasionally disjointed). Murphy and Ali immediately decide to focus their attention on Itami, so he bails. Murphy follows him out for a slugfest and Ali follows with a somersault senton from the top rope! Ali tosses Itami into the ring and unloads with some ground n' pound. Murphy throws Ali away to get some boots in on Itami. He decks Al for trying to interrupt and goes back to working Itami over in the corner. Ali comes back with chops that hurt himself more than it does Murphy. Crisscross and he takes Murphy over with a flying head-scissors. He meets a boot coming off the ropes but recovers in time to send Murphy to the outside. He hits the ropes for another big dive but Itami interrupts with a knee to the midsection for two. Ali fights out of a chin-lock but gets taken over with a back drop. Itami boots Murphy off the apron and covers Ali for two. Itami with kicks to the back, demanding for respect. Murphy sneaks in, takes Itami over with a snap mare, and delivers a kick of his own. They take turns giving each other the same treatment until they go nose-to-nose and exchange "open hand strikes" (slaps, in other words). Itami with a knee to the midsection and more kicks to the spine.

Ali comes back in and gets turned inside-out on a clothesline. Murphy with a German Suplex for two (both men had their shoulders down, by the way). Murphy deposits Ali into Itami and hooks Ali with a sleeper hold. Itami comes from behind and hooks a sleeper of his own but Murphy quickly breaks it in the corner. He goes back to Ali but gets nailed with a jaw breaker. Itami runs into a boot, Murphy misses a charge, and Ali comes in with the rolling X-Factor on Itami. Victory roll on Murphy. Ali with a reverse hurricanrana and springboard Tornado DDT for two. Itami breaks up an 054 attempt, straddling Ali across the top rope. Itami climbs up with him for a back suplex but Ali flips onto his feet. Murphy lays him out with a boot, hits Itami with a corner-trap Super-Kick and follows with a modified DDT for two. All three men trade blows in the center of the ring, with Murphy the last man standing. Ali greets him in the corner with a Super-Kick. He goes for a corkscrew plancha and Itami boots him down in mid-air in a spectacularly timed spot. Murphy with a Powerbomb for two. He pulls Itami into a knee strike and Ali nails Murphy from the apron with a roundhouse. He goes to the top with Murphy stack on Itami and hits the pile with a 450 Splash. He covers Itami, but Murphy pulls Ali out of the ring. Murphy decides to undress the announcer's table but has his legs swept from under him. Ali get a running start and takes Murphy off the table with a Spanish Fly! Back inside, Itami hits Ali with a running basement dropkick for two. Itami removes the cover on the bottom turnbuckle. Itami hits the basement dropkick again, this time against the exposed turnbuckle, and that gets three at 15:54. Another solid Main Event, and the Triple Threat never really factored against itself. ***1/2

Final Thoughts: Good Main Event, but the rest of the episode seemed lacking. Next week has a big match already announced, and the (alleged) debut of a new Superstar, which is always something to look forward to. Hideo Itami is likely being positioned for his run as the top challenger, but I don't see them switching the belt unless it's a short-term situation, which would seem odd since it's usually the babyface who gets the big title win and robbed of the belt shortly after.