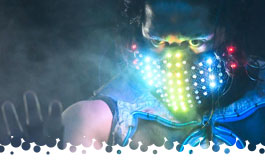 - Last week on 205 Live... Buddy Murphy and Mustafa Ali's third encounter was ruined by Hideo Itami, who continues to demand respect despite floundering everywhere under the WWE umbrella since being signed almost four years ago... TJP showboated his way through a squash match and continues to demand competition or a move to another brand... Drew Gulak's alliance with Kendrick and Gallagher over the Lucha House Party wasn't enough to stop Lince Dorado from picking up a big victory over Brian Kendrick... Lio Rush is coming to 205 Live.

- Presented LIVE on the WWE Network from Memphis, TN. Vic Joseph, Nigel McGuinness and Percy Watson are calling the action, unless otherwise noted. Drake Maverick runs down last week's ending, calling Itami's actions reprehensible, and he will not be permitted to compete or appear on tonight's show. Mustafa Ali will take on Murphy's training partner, Tony Nese, and to kick off the show, it's the Lucha House Party taking on Gulak, Gallagher, and THE Brian Kendrick in a Trios Match.

- Dasha Fuentes catches up with Team Kendrick before their match. Kendrick implies that to achieve their goals, they must beat the LHS, considered the top team on 205 Live. Um... THERE'S NO TAG TITLES. THERE'S NOTHING TO ACHIEVE AS A TAG TEAM. Sorry, all caps me needs to take his medication. Gulak calls the LHS "Hoochadores" (don't ask about the spelling, it isn't a real word to begin with).

The Lucha House Party vs. Drew Gulak, THE Brian Kendrick, and Jack Gallagher:

I'm not going to lie... I'm getting tired of seeing Kalisto every week. Standard rules here. I'd much rather them do something different, like maybe an Elimination Tag or even doing Gauntlet Style. Kalisto comes out with a Piñata with a Drew Gulak cut-out on its face. Did you know, Jack Gallaher and Drew Gulak meet in the 1st Round of the U.K. Tournament? TENSION, PERHAPS? Kalisto and Gallagher start. Gallagher with a waist-lock takedown. Kalisto escapes with a momentum throw and dances. I hope that becomes a gif sooner than later. He takes Gallagher over with an arm drag and tags in Dorado, who comes off the top rope with a double axe-handle. Gallagher gets taken down with a drop toe hold and Dorado stomps across the back. Kalisto back in for a launching splash. Dorado with a splash, and guess what, Metalik walks the ropes for a 3rd splash, but it only gets a two-count. Crisscross and Metalik with a flying head scissors, followed by a dropkick. Dorado back in for a double suplex for two. Gulak with a stiff forearm to the chest. Dorado sweeps the leg and springboards off the ropes with an arm drag. He takes Gulak over with a head scissors, knocking him out of the ring. The Dorado gets an assist to springboard off the ropes for super-pescado, and this crowd couldn't care less, unfortunately.

Back inside, Dorado covers Gulak for a near-fall. Gulak forces Kalisto into the corner, exposing the midsection for Gallagher to land a headbutt. Kalisto fights back, escaping his grip with a jaw breaker. He doesn't see the blind tag, allowing Gallagher to sweep the leg from under him in the corner. Kendrick with mounted clubbing forearms across the face and some mockery of the Lucha chant. Snap suplex into a cover for two. Gulak with a power slam for two and hooks a straight-jacket chin-lock. Kalisto escapes with another jaw breaker and fighters out of the corner, only to be caught by the ankle. Kalisto tags Dorado, but the referee misses it. Gallagher drags Kalisto around the ring, ramming him into the apron before depositing him into the ring for a big stomp from Gulak. Gallagher with a modified abdominal stretch. A very gentlemanly one, as he doesn't cheat. Kendrick with a running boot for two. Gulak with a torture rack transitioned into a hammer-lock/single-leg crab hybrid. Kalisto tries to rally but Kendrick traps him in the corner with shoulders to the midsection. They fight it out on the top turnbuckle until Kalisto hits a tornado DDT. Metalik gets the hot tag (after doing very little all match) and springs in with a body press on Gallagher. Whip to the corner and he nails Gallagher with a Super-Kick. Metalik with a bulldog and missile dropkick for two. Whip and Dorado with an assisted springboard dropkick into a roll-up for two. Dorado knees the head of Gulak to counter a suplex and cradles him for a pair of near falls. Gulak avoids a head-scissors and drills Dorado with a lariat for two. Dorado fights out of a submission attempt. Gulak with a roll-up and handful of tights, but the referee sees the blatant cheating. Dorado with a leg-trap heel kick for two. Kendrick with the Captain's Hook, but Kalisto saves as we get the big "everyone hits a big move" sequence. Dorado fights off a 2-on-1 and hits a double Springboard Stunner. Kalisto and Metalik with dropkicks and synchronized tope con hilos on Gallagher and Gulak. Dorado wants to join the fun, but Kendrick catches him in the Captain's Hook a second time. Dorado rolls through to escape and hooks the tights for the three-count at 15:15. Absolutely no heat for the first 10 minutes, but well worked for what it was. ***1/2

- Hideo Itami cut a promo on Twitter, mostly in Japanese. He said Mustafa Ali and Buddy Murphy didn't deserve to be in the Main Event last week, and don't deserve to be the Champion. He will be the next Cruiserweight Champion and they will learn to respect him.

- Drake Maverick is backstage with Buddy Murphy. Murphy doesn't let him speak before saying he isn't wrestling until he gets a match with Itami. Funny, Ali said he wanted the same thing, but he's going to have to wrestle regardless of his opinion. Maverick says if you want to get something you want, come to him politely with a request.

- Mustafa Ali cuts a selfie-promo about Hideo Itami ruining his chances of putting Buddy Murphy away last week. When you're down, you get back up, and tonight, he's taking the next step towards the Cruiserweight Title when he defeats Tony Nese.

It's our obligatory enhancement talent showcase. Tozawa has nothing going for him now that he's already lost his blow-off match against Hideo Itami. Tozawa with chops and a straight right hand. He stomps Irby down in the corner. Irby comes back with a spinning kick to the midsection, but Tozawa quickly lays him out and connects with a jumping senton. Irby regains control with a pump-kick and stomps in the corner. Tozawa gets rocked with forearms but they appear to have a miscommunication before Tozawa takes him over with a head-scissors. Tozawa comes off the top rope with a missile dropkick. Tozawa with Trouble in Paradise and the flying senton finishes at 2:37.

- Lio Rush is coming to 205 Live. "How can you have two Cruiserweight Tournaments without having the greatest Cruiserweight?" Soon the world is going to find out why he's the right man, in the right place, at the right time.

- Tony Nese interrupts his backstage work-out to cut a promo on Mustafa Ali. He's not the only one out to make a point, because he's making a statement at Ali's expense.

- TJP cuts a selfie-promo about not being in a meaningful match on 205 Live. He's going to remind Drake Maverick he carried 205 Live on his back and soon he'll be the one that got away.

Not the most high-profile Main Event in 205 Live history. Nese has a newfound friendship with Buddy Murphy that hasn't been explained in any detail. Cedric Alexander comes to ringside to make sure Buddy Murphy doesn't interfere in the match. Nigel McGuinness calls Nese the winner of the Jesse The Body Award. I'm sorry, but that puts a smile on my face. Lockup to the corner and Nese with strikes to the midsection. Whip to the ropes and he takes Ali over with a high back drop for two. Ali flips over a charge in the corner and connects with a push-off dropkick. Nese to the apron and Ali knocks him off with a spinning heel kick. Ali follows to the outside but Murphy steps between them. Nese uses the distraction to blind-side Ali with a forearm and launches him spine-first into the post. Back inside, Nese covers for two. Nese with a hard whip to the corner and a running elbow for two. Nese slows things down with a body-scissors. Ali fights to his feet and counters a back suplex with a body press for two. Nese with a thumb to the throat. Ali avoids the springboard moonsault and rolls in from the apron with the X-Factor for two (I still prefer the move ending with a neck breaker).

Ali wiggles out of a pump-handle slam and springs off the ropes for a Tornado DDT. Nese throws him off and unloads with strikes. Crisscross and a double clothesline has both men down in the center of the ring. Ali dropkicks Nese on the top turnbuckle. Nese throws him off trying to go for a hurricanrana and lays Ali out with a lariat (with Ali taking a hard bump on his neck). Nese with a pump-handle into a Michinoku Driver for a near-fall. Ali interrupts the running knee with a Super-Kick. Nese rolls to the floor to avoid the 054 (or as the replay shows, Murphy pulled him to safety), so Ali follows with a tope con hilo. Murphy decides to attack Alexander. Alexander fighters him off with a rolling elbow and follows him out of the ring with a tope suicida. Back to the legal participants, Nese rolls Ali up for two, then lifts him with one arm to slam him into the bottom turnbuckle for another two-count. Nese with a running knee strike. He sets up for the corner knee, but it meets the turnbuckle. Ali connects with the springboard Tornado DDT and finishes with the 054 Splash at 10:09. Perfectly acceptable but seemed a bit disjointed at times. ***

- Post-match, Mustafa Ali makes his own plea with Drake Maverick, wanting a match with both Buddy Murphy and Hideo Itami. Dasha Fuentes catches up with Maverick backstage and he gives in to demand, making a triple threat for next week between all three Superstars.

Final Thoughts: Better than usual episode this week, with two good matches (and a really fun Six-Man to open the show, honestly) and some character direction as they continue to tease the future of TJP and the debut of a new Superstar with Lio Rush. There's only so much you can do with 45-minutes (on average), and they managed to squeeze a lot in to try and build momentum for the coming weeks.