Bill Mercer welcomes us to this "special edition" of World Class. Slightly different opening, as he's in a video control center, instead of at ringside or on a soundstage. First time I think I've seen this in these old episodes and it gives things a more professional polish. But with so much going on in World Class Championship Wrestling, let's get down to ringside for...

I always thought that Steve and his twin brother, Shaun, would've ended up in the WWF or WCW before the 80's were over. Lewin's nearly 50 at this time, but he's still pretty rocked up. His hair's grown out a little bit, too. Lewin and Hart work together with sneaking in the ol' foreign object. Lewin suckers Simpson in with a feigned headlock and starts smacking him with the object. They brawl out on the apron, right on top of Marc Lowrance's ringside table! Simpson attacks with two of the weakest chair shots ever captured on film. Simpson eats ringpost, then Lewin eats ringsteps. Simpson with a slam on the floor and they brawl up into the crowd for a lame double count-out.

Our second consecutive mismatch of styles. Abdullah's billed as the "Brass Kunckles Champion", which I thought had disappeared sometime in 1984 with Terry Gordy. Abdullah doesn't have the actual belt, of course. Nothing much going on, here, as it's mostly Abby headbutting, chopping and choking. "Go Brian, go" is chanted by the dozens in attendance, which usually means the mini bayface comeback is imminent. Adias gets tossed outside and it's more brawling until Abby lets him back in and chokes him with hidden athletic tape. Abby then drops a big elbow, as referee Bronko Lubich makes the 3-count love-tap.

Special Report on the Dingo Warrior

We get a flashback to the September 19 episode, when "Mad Dog" Buzz Sawyer, "Maniac" Matt Borne and Percy Pringle III all turned on the Dingo during a match for the 6-Man Championship. A new video from a Fort Worth taping, as Dingo cuts an in-ring promo shouting Fightin' Words at Pringle's men. He announces that he's coming after Borne & Sawyer for the Tag Team Championship, with his new partner Steve Simpson. Borne, Sawyer and Pringle hit the ring for a beatdown attempt. Dingo gets the early advantage, slamming them around the ring, until the bad guys pull out a chain and choke him out. Steve Simpson runs in with that lethal chair and makes the save. 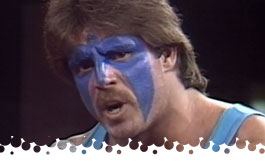 Looks like this is from Fort Worth with Marc Lowrance on the call. The crowd looks about three rows deep. Yurkoff's announced as simply "The Crusher", so they must've just added the Yurkoff surname. After being announced from Puerto Rico in our previous episode, Zulu's now billed from "The Zulu Nation in Africa". Sharep grabs the mouse mic and claims he's been trying to get Zulu to join him. He's now offering him one last chance, so of course Zulu declines. Zulu tries a standing side headlock and Crusher easily throws him across the ring. Weak shoulderblock and Crusher chokes Zulu on the ropes. Terrible hip-toss, then a decent standing drop-kick from Crusher. Elbow drop and a cover, but Crusher pulls him up at 2, cuz' it's time for a chinlock. Slam, legdrop and whip-in for a reverse elbow, as it's all Crusher. Match jumps forward as Crusher shoves Zulu outside. Zul returns to make a mild comeback with some headbutts and stomps for a 2 count. He goes for a vertical suplex, but Crusher reverses it. Crusher with a diving headbutt, legdrop, then a top-rope flying splash for the pin! Zulu looked absolutely terrible and it was up to a green Crusher to try to carry the match. After the match, Sharpe calls off the Crusher, talks to Zulu and gives him an "I-Toada-So". Somehwat surprisingly, Zulu seems to agree and follows Sharpe to the back.

Cut to an in-ring promo from later in the night-- Zulu has shaved his hair, added facepaint and is now thoroughly behind Sharpe and Crusher Yurkoff! Well, nice to know they've found a new friend. Sharpe hollers how the "new Zulu" will be taking on Ricky "The Dragon" Steamboat in the Cotton Bowl. Well, this all explains why Zulu was completely destroyed in the last match, but not an excuse for how terrible his work was. 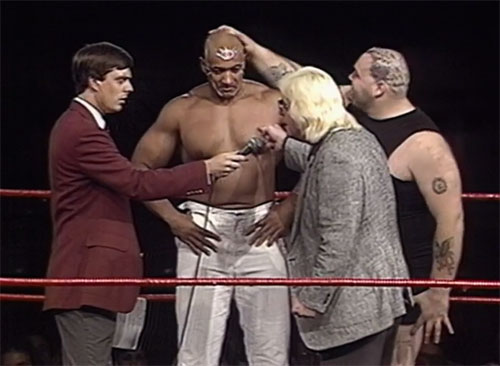 Back to the Sportatorium and Mercer. Not sure when this match was taped, as Dingo's still sort of a heel and getting booed. Raven is Rood's female valet, for the record, and not Scotty Levy. In a strange coincidence, she kinda' looks a little like...Cheryl Roberts. They start with the Penultimate Knucklelock Challenge between Rood and Kevin. KVE uses the ropes to climb and turn it into an armdrag. Mike comes in to work an arm-wringer/armbar and strecthes Rood's shoulder on the mat. The VE's keep working the arm, until they whip Rood into the corner, allowing the tag to Dingo. A bearhug happens. During this lull, we can see the (semi) famous Von Erich lookalike Sportatorium fan in the front row; decked out in white "USA" HALF-SHIRT and tiny shorts. Not knocking the guy, but he's one of the more memorable World Class fans. Rood tags back in and applies an abdominal stretch on Kevin. Y'know, I'm a little surprised that Al Snow didn't do a gimmick where he constantly used that move and called himself "The Abdominal Snow-Man". Hey-oh! Anyways, Kevin does the "hook 'em horns" symbol as he powers out of it with a hip-toss. Kevin signals for the CLAW as he leaps from the top and clamps it on. While referee Ralph Pulley is checking in, Rude intentionally smacks him and gets disqualified. Von Erichs win, but on the outside Dingo Warrior is pissed at Rood for costing them the match. They get into a shoving match and Dingo clears the ring with the steps! "Ding-o! Ding-o!" is chanted. Match was just random stuff... but another way to focus on Dingo's face turn.

KVE's sitting with Mercer in the control center, promoting his upcoming shot at WCCW World Heavyweight Champion Black Bart in the Cotton Bowl. Of note is that Kerry's injured, but plans to be in his brother's corner.

Why'd You Watch This?:
This episode has another of those "hey have ya' seen it" matches, since most folks associate "Rude" and Warrior with their 1989 feud in the WWF. Rasslin' sure makes strange bedfellows. It's another small chapter in the "Saga of the Dingo Warrior". Outside of that, the Zulu heel turn seemed to come from out of nowhere and I don't think anybody really cared. The 3 undercard matches were all poor match-ups with bad chemistry. I'm getting the sense that's a recurring theme for World Class in 1986.