Once again coming from "the skyline of beautiful downtown Dallas, Texas", it another edition of Wold Class. Bill Mercer welcomes us and mentions that we'll see the NEW World Class World Heavyweight Champion, Black Bart... and his horse. Really... his horse? But with so much going on in World Class Championship Wrestling, let's get down to ringside for... 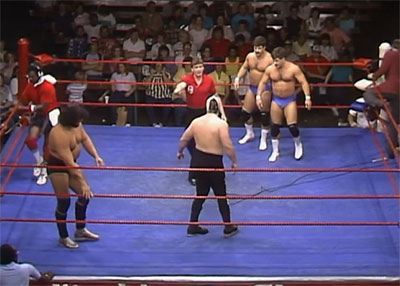 The U.S. Express vs. The Grappler & Spike Johnson

Yow, I know it's early in the show, but the crowd looks especially sparse, tonight. Maybe 6 rows deep. Johnson is another guy working a lite biker gimmick. One of the Batten/Express Twins (I'll call him Brad) starts with some basic grappling with...the Grappler. Armbar and duck-under backdrop as Brad works the arm. Bart with his own armdrags and they tag in-and-out working the arm. Hairpull from Grappler allows Johnson to come in. Mercer calls him a "big, hairy gentleman". Battens do an illegal switcheroo, working a leg lock. Johnson takes over with some clubberin' and delivers a flying clothesline and a slam. Vertical suplex from Grappler gets a quick count. Bart ges worked over for awhile, including a gutwrench suplex and backbreaker from Johnson. Bart ducks under Grappler's legs for the hot tag, as Brad backdrops and drop-kicks Grappler. Almost out of nowehere, Johnson catches him in a side backbreaker and gets the pin. Well, the Express seem to be pretty low on the card.

Looking like the lovechild of Buddy Rose and Bobby Heenan, Sharpe introduces himself to the World Class audience. He's searched around and has found the best wrestler in the world-- The Crusher. Sharpe runs down Crusher's stats while Crusher, himself, bites a beer can in half. Oh, by the way, you might recognize the Crusher... 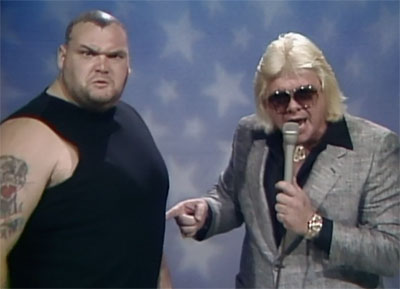 Brooks didn't seem to have a consistent run in World Class, but overall he seemed to come-and-out for about 10 years. Basic armbar and punchy stuff from Simpson, as Brooks works in some cheap shots. The Penultimate Overhead Wristlock Challenge occurs; which Brooks ends with a hairpull, of course. Simpson works an armbar, again, but holds on a Brooks tries to slam him. Brooks gets sent into the turnbuckles, selling a hurt shoulder. EYE-RAKE and Brooks tosses Simpson through the ropes to the floor. Mercer's so into this match, that he goes off into a tangent about the Texas State Fair. Simpson grabs Brooks' legs and splits him on the ringpost. Simpson returns to the ring with a series of kicks and a monkeyflip out of the corner. Brooks with another EYE-RAKE and whips him to the ropes. Simpsons leapfrogs Brooks, then ducks underneath to roll him up for the pin. Brooks sold fairly well, but his offense was garbage.

Bart slowwwwwly rides his horse around ringside and lets Mercer interview him. He gives a hollerin' promo that's basically: "I'm Black Bart and I'm the Champion". Supposedly, Bart beat Chris Adams "out on the west coast", but it was probably a phantom title change. Bart takes Doll on a tour de turnbuckles and delivers a suplex. Back-drop, face plants and a top-rope slam on Doll. Bart even BITES in front of the camera, so we know he's a wild n' nasty feller. For the third straight match, someone gets thrown through the ropes, as Doll does the honors. Doll tries to shoulder-tackle his way in, but Bart no-sells and whips him for a clothesline. Slam and a second-rope legdrop scores the pin for Bart. Bart goes outside to get his branding iron...which dabs some black grease on Doll's chest. Yup, this was terrible. Bart started very energetically, but looked worn out and sloppy the rest of the way.

Joined-in-progress and just a way to get Bruiser on the card. Brody thumps away, works a headlock and allows Jackson to get in a few shots. Jackson eats Big Furry Brody Boot on a charge into the corner. Slam from Brody, then his finisher: a running kneedrop to get the 3.

This is our Main Event of the Evening, yet the crowd still hasn't filled up much. Warrior gets a good pop as he's introduced. For what it's worth, his usual paint mask is slightly different, as he has one half in yellow and the other in red. Oh, and Sawyer still has the awesome furry Chewbacca boots! Buzz and Mike do a shoving match to open, then Mike performs a monkeyflip and a drop-kick to --yup--send Sawyer through the ropes and to the floor. Tag off to Borne and Kevin, respectively. Kevin with two drop-kicks to the chin, followed by a flying head-scissors. Borne gets pummelled in the opposite corner and the bad guys are reeling. Borne works a headlock on Kevin, but walks right into a drop-kick from Mike. Mike almost gets de-pansted as Borne pulls him to the opposite corner. Dingo finllay enters, with a slam and three elbowdrops. Another slam and Dingo goes up to the second turnbuckle for a...flying splash, I guess. Both men looked awward on the move. Surprise bodypress from Mike gets 2 on Sawyer. Press-slam backbreaker from Sawyer as they work over Mike. Kevin and Lance take over with a slam and top rope elbowdrop double-team for 2. Vertical suplex gets 2 for Lance. Dingo makes the save and slams Lance...almost falling over Borne in the process! Lance manages a backslide on Sawyer for 2, then whips him in for a drop-kick. Triple-team effort on Sawyer, until Kevin misses an elbowdrop. Dingo returns with a stiff clothesline for Kevin. He tries his terrible seocnd-rope splash, but this time the lake is dry. Dingo goes on the receving end for a spell and it's kinda' funny to see him sell for the scrawny Mike. Mike almost breaks his neck backdropping Borne. Double flying drop-kick from Kevin and Mike hits Dingo in the facepaint. Kevin with a slam, then a big flying splash on Dingo for 2. Dingo tries to tag out, but Borne and Sawyer want no part of him and LEAVE! Dingo is left alone to get backdropped by Mike. Kevin flies from the top with a big splash for the 3 count, as the champs retain. Very animated main event, despite the shortcomings of Mike and Dingo.

The Von Erichs quickly leave the ring, allowing Percy Pringle to enter the ring and smack him with his cane. Dingo has enough, grabs the cane, and beats the tar out of Percy! Sawyer and Borne return, but both get clotheslined and slammed by the Dingo. Huge ovation from the crowd. Yeah, I think this was the official face turn for the Dingo Warrior. 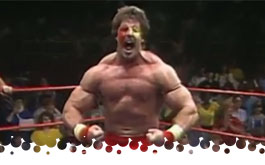 Mercer tries his best to plug next week, but the main event will be Sawyer & Borne against Zulu & Steve Doll. "So long, everybody!"

Why'd You Watch This?:
It's obvious that WWE Network has picked these recent episodes because they highlighted the Dingo Warrior. I think they had done the "heel tag partners abandon Warrior" a few different times, but this was the one that really mattered. The 6-man match is worth watching, but the three undercard matches are awful. Slight bonus as we get to see the debut of a young Scott "Bam Bam" Bigelow as The Crusher (later, Crusher Yurkof). I mean, the man has tattoos on his head! Of FLAMES, brother!