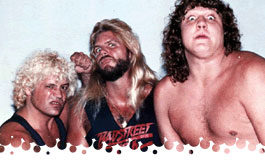 More from the "World Famous Sportatorium" in Dallas, Texas. Our host, Bill Mercer, runs down tonight's card as we get snazzy graphics of Kerry Von Erich and Gino Hernandez flying over the ring. In fact, we've got two main events, tonight, as we'll also see "Iceman" King Parsons continue his battles against the Super Destroyers-turned-Irwin Brothers! But with so much going on in World Class Championship Wrestling, let's get down to ringside for...

For the held-up championship, as announced by the NWA back on our June 23 episode. We're told this is from the "recent Firecracker Event in Fort Worth", which I'm guessing was a fun county fair thingie. "Badstreet Rules" are in effect, which means anything goes and all 6 men are allowed in the ring. We cut to (maybe) just after entrances, and the brawl is ON. It seems like the ring announcer is hurriedly trying to make the match announcement amidst the pandemonium. The 'Birds are wearing matching "Badstreet USA" shirts, while the Von Erichs are in jeans and t-shirts. Or, in Kerry's case, just jeans. Von Erich takes the 'Birds to the woodshed, beating on them with belts and cowboy boots. Gordy bumps like mad and eats a TRIPLE drop-kick, then a double backdrop from Kevin and Kerry. The formula of the match is pretty much "beat on someone, then gets tossed outside", almost as if it were a mini-battle royal. Mike gets stuck on the apron, but uses a leg-scissors to flip Roberts to the floor. Kevin and Hayes both get tossed outside and blade. Freebirds slowly take over and Hayes delivers a vertical suplex to Mike. Kerry powers Hayes into the corner and climbs up for some elevated punches. That the cue for Killer Khan to run-in and jab Kerry in the neck with the Oriental Spike. Kerry topples to the mat and Hayes makes the cover to steal the pin and the championship (temporarily). All the fans in the front row ty to get the ref's attention as they point to Khan, as if saying: "Wait! Wait! Look, HE did a run-in"!

Kerry's hanging and banging in the gym, as he's joined by Marc Lowrance. They tell us that the 6-man title has been held up, again, due to Khan's interference. Kerry targets Khan, as he's especially ticked over taking the fall. Lowrance then asks about Gino Hernandez, who Kerry also threatens. Not a great interview, but one of the better ones Kerry's had, as he didn't seem too wooden, nor did he stumble over his phrasing like usual.

Back to the Sportatorium and what appears to be the first match on this taping card. First time we've seen McCord, a guy who had most of his success in the Southern territories. Link headbutts McCord's sternum, right before the bell, and the squash is on. Link stops heabutting for a bit, as he whips McCord to the ropes, lifts him into a bearhug and plants him in the corner. McCord gets a few shots and we can see an old guy in the front row, in a light bue leisure suit, enthusiatically cheering! More hedbutts from Link, including a powerslam/headbutt move. Link then goes up top and delivers a flying headbutt to get the pin, complete with a nonchalant cover, at 2:20.

Iceman's out for revenge, after he was attacked by Irwin on the June 23 episode. "Chauncey" chants immediately fill the air...and I have to wonder: why didn't the Sportatorium Faithful chant that when Irwin was still "Super Destroyer #2"? Was the mask THAT good at hiding his identity? Irwin works the arm, until Iceman rolls to the mat and breaks it with a double-kick to the chin. They hit the ropes and Iceman delivers a backdrop and an intense elbow-drop for 2. Irwin thinks he's delivering a slam, but Iceman hooks the arm and rolls forward to headlock Irwin to the mat. Iceman with a shoulderblock, but misses a drop-kick and Irwin takes over with a slam. He tries flying from the second turnbuckle, but Iceman dodges and we're back to some headlockin'. They hit the ropes and this time Irwin stun-guns Iceman on the top rope. Meanwhile, Zumhofe and Scott Irwin trade Menancing Glances on the floor. Irwin works a headlock and some punchy/kicky for awhile, until Iceman comes back with a headbutt, dancing punches, and a nice drop-kick to the face. Ice puts his head down and Irwin's back to clubberin'. They hit the ropes and, out of nowhere, Iceman hits the flying butt-butt and gets the 3 count pin at 13:08. Afterwards, the expected 4-man brawl occurs, and this time Zumhofe gets whipped by the Irwins. Iceman is thrown out, but fights his way back in and clears the ring, even getting in a lash on Wild Bill.

Gino's a dual champ, but this doesn't appear to be for either of his belts. I don't know if I've ever noticed this before, but Gino looks more than a little like Scott Baio! Gino tries starting a pose-down, but Kerry armdrags him and pops the crowd with his own posing. In a sequence right out of Vintage Kayfabe Era 101, Kerry hits a shoulderblock, ducks under Gino's leapfrog, then delivers a drop-kick to send him to the outside (or a commercial break spot in the 90's). Gino tries brawling, but Kerry sends him rolling to the outside with his animated punches. Kerry misses a spot, as Gino's spinning kick goes unnoticed, so they do it into the corner. Gino then beals Kerry across the ring and gets a quick count. They hit the ropes, as both guys knock noggins and hit the mat. They both get up and try a drop-kick, at the same time. Gino goes up top, but Kerry's there to press-slam across the ring... then another straight-up press-slam for a 2 count. Vertical delayed suplex gets another 2. Gino blocks a splash with his knees, then works over Kerry and tosses him outside, through the ropes. Kerry fights his way back in, then tries the splash, again... but Gino gets the knees up, again. Gino delivers a suplex and sets up for his turnaround elbowdrop, but misses. Kerry with a discus punch, then he whips Gino to the turnbuckle, where Gino does an exaggerated over-sell and flips out of the ring. Another bouncy rope sequence and referee David Manning gets bumped. Gino sneaks in his trunks for (apparently) brass knuckles, and decks Kerry. Manning, of course, comes to and makes the 3 count as Gino wins at 13:28.

Back from commercial, Mercer's in the ring plugging next week's card, when we'll see Mike Von Erich and Chris Adams take on Michael Hayes and Buddy Roberts. "So long"!

Why'd You Watch This?:
The main event matches were eeriely similar in their pacing to the formula the WWF used from the late 80's an onward. World Class isn't necessarily just kicking the can down the road, but they are keeping their feuds simmering. Seeing the 6-man championship bout was cool, as Freebirds/Von Erichs has no end in sight. Combine that with the double main events and you've got a quality episode.