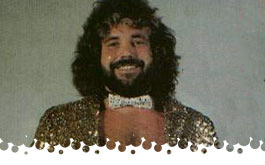 We continue on from Dallas as Bill Mercer promises us that tonight's main event "will shake the rafters of the ol' Sportatorium". We'll also see Jimmy Garvin back in action... plus something resembling "action" in the form of Chief Jules Strongbow. But with so much going on in the World Class Championship Wrestling, let's get down to ringside for...

Okay, we're not new and live at ringside, just yet. Only a few minutes are cut, as we get almost the full match from last week. I'm guessing they're emphasizing this to show that Von Erichs/Freebirds feud is still on. I'm not being sarcastic, as some fans might've thought that the issue was over, since the Von Erichs took down the Freebirds at Texas Stadium, recently. Yet the feud still has legs and some new blood has been spilled, literally.

Pre-recorded on-location interview from Bill Mercer. Stella Mae actually pulls up in a semi-truck. She says that Sunshine is really named "Valerie" and she raised her since she was 3. Valerie was a honor roll student...until she met Jimmy Garvin, who abused her physically and mentally. Stella Mae can't find Valerie, but she knows where Garvin is and plans to give him a whuppin'. She concludes with a warning to Garvn, as she grabs a 2-x4-- watch out, cuz' if she sees you outside the arena, she'll drive her truck right over you! Okay, so "Sunshine" has disappeared, but they've got a pretty unique person to replace her. I'd actually be worried about a pissed-off old aunt who drives a tractor trailer and wants to brain me with a 2 x 4 and/or commit vehicular manslaughter.

I'm glad I didn't mention this, earlier, but during Strongbow's matches you can hear and see fans doing the steterotypical "Indian war cry". Link threatens a HEADBUTT, but Strongbow bounces off the ropes until he can land a chop. Link sells all of Strongbow's chops well enough, save for one to the head. More chops. More headbutts. Strongbow eventually goes after Akbar, on the apron and chops him. Link sneaks up from behind with some headbutts. Akbar's upset and jumps in the ring to attack Strongbow, drawing the disqualification. Quick double team beatdown, until "Iceman" King Parsons makes the save. Well, at least we got this match out of the way.

Garvin's says it's not his fault that Sunshine became a "fat slob" and had a breakdown. He then claims that Stella Mae used to be in an insane asylum. Garvin literally looks over his shoulder, the whole time.

Crisp grapplin' to start, including Torres doing a duck-under armbar into a backdrop/slam. Nice roll-up off the ropes from Torres scores a quick 2. Garvin works the armbar, beats away, slams Torres onto the ropes, then delivers a swinging neck-breaker for 2. Torres fights back for a bit, but Garvin hits his delayed "Bombs Away" suplex to score the 3 count at 4:55. For a jobber squash, this was pretty good.

Garvin celebrates in the ring until Stella Mae French runs in and blasts him from behind. Garvin and Precious hightail it, as Chris Adams arrives to calm down Stella Mae.

I'm sure if they were around in the 90's, some Internets Smarks would've retroactively named Gordy and Khan something like: "The Oriental Spikers" or "The Violent Thumb Connection". FWIW, Gordy complains about Iceman's injured left hand, which is all taped up. Gordy over-sells a missed punch in the corner and almost topples to the floor. Iceman boogies his way out of an armbar and rolls to the mat to deliver a kick. Criss-cross (JUMP! JUMP!) sequence and, criminy, the ropes appear to be very loose tonight! Adams comes in to slam Gordy, but the Freebird fights back and tags in Khan for some puncy/kicky. Gordy returns for a drop-kick and Adams gets worked over for a few minutes. Khan hooks a sleeper, allowing Adams to pump up the crowd and fight back. Adams ducks through Gordy's legs and makes the lukewarm tag to Iceman. Ice thumps, headbutts, slams Gordy, but misses an elbow off the ropes. Now it's Iceman's turn to get worked over for a bit, as Gordy and Khan tag off. Referee David Manning gets into Gordy's face...probably because he just wants attention in what's been a straightforward match. Khan misses a leg-drop, but Iceman's dazed and crawls to the wrong corner. Bad guys keep beating away, until an actual HOT tag to Adams. Gordy over-sells another toss into the corner, then gets laid out by Adams' superkick. One for Khan, too (SUPERKICK Social Gathering?), then a double backdrop on Gordy. Four-way brawl ensues and Gordy throws Iceman over the top rope, triggering the disqualification at 10:33. Khan and Gordy work over Adams, including a double-team flying kneedrop. Iceman finally clears the ring with a chair. No real storyline to this, as it was just a match for the sake of having one.

Why'd You Watch This?:
Another of those "filler" episodes. No match stands out and the only memorable segment was Stella Mae French in her tractor trailer. I'd put this up there with King Kong Bundy on a loading dock in terms of unique World Class interviews. The whole Stella Mae/Sunshine thing is weird. World Class is basically having to play the ol' "retcon" card and re-assign all of Sunshine's angles and heat to the newcomer Stella Mae (former wrestler "Tanya West"). Sunshine was arguably the #2 babyface in the whole company, right behind anybody-named-Von-Erich. By all accounts, Sunshine's disappearance was legitimate, but her exact reasons for doing so are still unknown.

Two big changes in World Class that haven't been mentioned, yet: 1- Kamala apparently left World Class, sometime in May 1984. I believe he went to the WWF where he feuded with Andre the Giant. 2- The Super Destroyers were unmaksed and exposed as the Irwin Brothers-- Bill and Scott. The tag team titles have taken a back seat on these recent World Class episodes, so we'll see how that plays out.