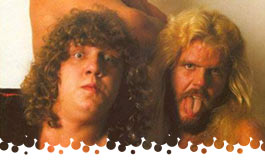 Continuing on with another (somewhat) special edition of World Class Championship Wrestling. WWE Network has a disclaimer telling us that is "presented in the most complete format possible". Bill Mercer welcomes us to the campus of North Texas State University, once again, but this time he's standing next to "an example of modern art". It sorta' looks like a giant tank trap. Mercer mentions that none other than Kevin Von Erich once attended North Texas State and played football. He's in tonight's Main Event! But with so much going on in World Class Championship Wrestling, let's get down to ringside for...

This is the match Mercer was talking about, last week. We're joined-in-progress from the Will Rogers Coliseum in Fort Worth, probably about 14 minutes into the match. They're working some restholds, then hit the ropes as Adams kicks out Garvin's legs. Adams does a drop toe-hold and it sounds like Mercer calls it a "bear trap". That's actually a pretty cool name for that move! Adams catapults Garvin into the corner...but Garvin's pretty gassed and walks out of the ensuing fling. Garvin clubs away on Adams' chest and continues the lazy work by leaving his fist in position after each "strike". Adams sets up for a reverse (tombstone) pildervier, but kinda' falls forward to make it more of a slam. Garvin with a vertical suplex and then it's time for the wimmen-folk to get involved, once again. Gartvin covers Adams and Precious reaches in to "hold down the leg". Only problem is, it looks like she just moves Adams' leg to under the ropes and for a moment I thought she was trying to break the count...which didn't make sense. They try it again, as referee David Manning counts three, then immediately waves it off. Match continues as the girls run around ringside. Adams rolls up Garvin, off the ropes, and bridges for a nice pinning predicament... but Precious reaches in with the air freshener and blinds him. Adams is supposed to be blind, but you can catch him looking over his shoulder to see where Garvin is, so he doesn't directly tumble into him. Garvin uses the advantage to hit a belly-to-back suplex, score the pin, and become the NEW American Heavyweight champion. Again.

Precious and Sunshine enter the ring for a mild catfight as the fans go bananas. Not exactly sure of what just happened, David Manning grabs the house mic and hollers: "I'm going to the promoter, right now. This is the last time these women will interfere in a match". Wishful thinking.

We're back to "The Super Pit" at North Texas State, with the very definition of a preliminary match. Gray plays the heel, a bit, showing some mild arrogance and complaining about hair pulls. Mantell works an armbar and everytime he thumps Gray, a little girl in the front row jumps out of her chair, clapping. Gray then controls things and works a long reverse chinlock. This gives Bill Mercer enough time to tell us all about the upcoming 6-man "Badstreet Match" at Parade of Champions, pitting the Fabulous Freebirds against Mike, Kevin and...FRITZ Von Erich, who is coming out of retirement for "one time only". There's enough down time in this match, that Mercer circles back and tells us all about it, again. The match concludes as Mantell is whipped to the ropes, but rebounds, leap-frogs and hits a pretty nice Russian leg sweep to get the pin.

Mercer tells us that when we come back from commercial, we'll see a special feature on "the Oriental man", referring to the Great Kabuki. Yet we never get it, so I'm guessing this explains the WWE Network disclaimer. World Class would typically shows hype videos set to popular music. Honestly, I'd rather skip it entirely, rather than see a WWE dubbed-over "video" set to something like the Orient Express' music.

I'm guessing Iceman's program witgh Butch Reed never took off, so they're playing up his feud with Devastation, Inc once again. Iceman ducks and dodges, causing Kamala to tumble over the top rope. He comes back in and is sent out, again, courtesy of an Iceman drop-kick. Akbar dismisses Friday from rinsgide and sends him to the back. Kamala clubs away for a few minutes. Friday then returns with The Missing Link in tow. Iceman gets some momentum and comes off the ropes with a flying body-press for a near three count, but the Link runs in to draw the disqualification. Guess what bodypart Link uses to attack Iceman? Iceman is triple-teamed and rolls out to ringside as officials try to break it up. Buck Zumhofe runs down to check on Iceman and give him a hug. A security guy who looks like Waylon Jennings then leads them to the back. Iceman's always fun and this was kept very short-- about 4 minutes. Just there to set up more Iceman/Devastation stuff.

As the good guys leave, Akbar argues with referee Bronko Lubich, forcefully tapping him in the chest. Bronko forcefully taps back and the crowd gives him a minor pop.

Kevin gets the house mic and introduces "Granny Kent". "I owe you a hug. Look out, here I come". Awww. Granny's a well...granny... like the caricature of the "old lady ringside rasslin' fan". Sadly, those aren't around much anymore, if at all, and we're lesser for it. The big story is that Kevin's back at his alma mater, in the same arena where his brother David played basketball for the school. Anyways, the match starts with Hayes having to sell for Mike's basic backdrop and weak drop-kicks. Gordy tries to interfere and receives a drop-kick in his...well, his general area. One thing I'm noticing with Mike is that his drop-kicks aren't timed in the context of the match. A drop-kick is usually a big impact move. Mike throws 'em as if they were right hands.

Things pick up when Kevin comes in, as he'd been working with the Birds pretty regularly for months at this point. Gordy hits a swinging neckbreaker on Kevin, then later easily slams Mike with one arm. Hayes is very animated and working the crowd, so I guess you can say he's in prime form. Kevin gets the Iron Claw on Hayes, but Gordy makes the save. Mercer interjects a quick story about Fritz "gifted" the Iron Claw to the North Texas State athletic teams to use as their "Eagle claw". Huh. Kinda' cool. Of course, since it's a Von Erich/Freebirds match, things break down as all four guys enter the ring. The Von Erich set up to whip the Birds into a mid-ring collision, but the Birds reverse it and the Von Erichs crash into each other. Hayes tussles with Mike, while Kevin runs to opposite corner climbs to top, twists, and hits his flying body-press on Gordy to score the 3 count. Afterwards, Buddy Roberts comes in and they beat away on Mike, including a fireman's carry into a double knee gutbuster.

Bill Mercer quickly signs off and we're out.

Why'd You Watch This?:
The big Parade of Champions is only two episodes away, so this is obviously just more build-up. The Adams/Garvin match was essentially a long version of an "update" segment without the voiceover. As a standalone match, Von Erichs vs. Freebirds works as your typical hosue show match: send the fans home happy with the babyfaces winning the main event. Kamala/Iceman is noteworthy because, I guess, it's the official on-screen formation of the Rock & Soul Connection of Iceman and Zumhofe. They'll be going after Devastation's Super Destroyers for the American Tag Team Championship at Parade of Champipons, so there ya' go. Not essential viewing, but good suplemental viewing if you're wanting to see the full "Road to Parade of Champions".