It's a (somewhat) special edition of World Class Championship Wrestling, as Bill Mercer welcomes us to the campus of North Texas State University in Denton, Texas. You know it, nowadays, as "University of North Texas", home of the Mean Green! We're simply at "the Arena" on campus, so I'm guessing it's the building that came to be known as "UNT Coliseum". Mercer tells us that the event is even sponsored by the Sigma Epsilon fraternity! But with so much going in World Class Championship Wrestling, let's get down to ringside for...

Yup, he's announced as "Lenny", yet has neither a poem nor frisbees. His tights even say "LANNY", but who reads those things?! Poffo frustrates SD1 with an armdrag, drop-kick and a back flip. Poffo works the arm consistently, as SD1 sells it well. SD1 whips him in for a backdrop, but Poffo LEAPS, hits a dropkick and goes back to working the arm. SD1 hollers: "where did this guy come from?!" SD1 finally takes over with a kneelift and a slam. He misses an elbowdrop and Poffo is quick to clamp down on the arm, again. Poffo with a slam and his second-rope moonsault, but SD1 gets his knees up. Vertical suplex gets 2 for SD1. A bearhug happens as SD1 slows it down. Slightly blwon spot, as Poffo blocks a kick and SD1 simply drops to the canvas. Another bearhug happens. Poffo punches his way out, but SD1 hops over an attempted backdrop and delivers a (lame) dropkick. SD1 then applies the super-plex from the top corner to get the pin.

During the match, Mercer officially dropped the news that May 6 will be the "Parade of Champions" at Texas Stadium, in memory of David Von Erich. We'll see Kerry Von Erich taking on Ric Flair for the World Championship, plus the Great Kabuki will be taking on Kamala. We also heard that the usual shenanigans have occurred, as Jimmy Garvin and Chris Adams have exchanged the American Championship, again. Sorry, I've lost track of who has that belt, right now. Mercer adds that Andre the Giant will be returning, as well.

WWE Network always cuts out the musical introductions and entrances. A bummer, because I wanted to see what tune Zumhofe entered to. I also wanted to see his boombox! Yes, he's a total scumbag, but Zumhofe is one of my guilty pleasures. Roberts blindsides Zumhofe while he still has his robe on. Zumhofe turns it around, whips Roberts to the tunbuckle, slams him, then comes off the second rope with a reverse splash ("Vader bomb") to get the quick 3 count in about 30 seconds. Zumhofe gets the house mic and says: "if this is how I need to rock and roll, then that's the way I'll do it!" Big pop, and it's kinda' funny how Zumhofe never even took his robe off. 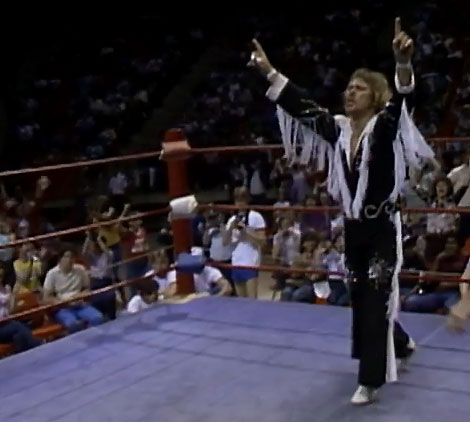 Huh. In this same spot, last week, we had another Link squash. Once again, I have no idea who Jerry Gray is. Yet I can safely say that he's NOT the 80's NFL cornerback of the same name. Almost a carbon copy of last week's antics, too, as Link hops outside to headbutt a ringpost and the ringbell. Same kind of match: headbutts a plenty, but Gray manages a drop-kick. Flying slam and a top-rope headbutt gets another easy win for the Link.

Back from commercial, we get a clip of Jimmy Garvin and Precious walking backstage, cutting a promo as they head to the ring.

Non-title match. Mercer fills us in that Garvin has recaptured the Amercian championship in a recent match that we'll see, next week. Sunshine and Precious go into a cat-fight, as soon as they hit the ring. Referee Bronko Lubich then orders both women to the back. Match starts with the guys trading headlocks and wristlocks, with Garvin doing a lot of vocal complaning to get heat from the crowd. More mat work and Garvin actually holds his own. One-armed slam from Adams, then into a headlock. Rest-holds for the next few minutes, as Garvin pulls the hair everytime Adams tries to escape. Adams applies a head-scissors and cranks the arm...and I'm beginning to wonder if this match will ever really get going. Garvin hops outside to whine to the crowd, then returns with a series of kneelifts and a seated camel clutch. Criss-cross and Garvin with a shoulderblock, then back to the seated clutch. Surprise sunset flip gets 2 for Adams, followed by 2 drop-kicks, but Garvin headbutts him in the tummy and hooks a headlock. Garvin tries for a suplex (his "Bombs away" maybe), but Admas reverses and delivers his own. Adams with a backdrop, kneedrop and a charging elbow to knock Garvin out. Adams easily suplexes him in from the apron for 2...as Precious returns to ringside. Of course, this brings Sunshine out and the cat-fight soon spills into the ring. The cameras miss it, but Adams gets a small package and the 3 count win. As usual, the action between the wimmen-folk fighting took the spotlight as the guys worked a very slow match. At least Garvin got some basic wrestling work in-- as he's been made to look like nothing more than a cheap-shotting dweeb, more often than not.

Bill Mercer plugs next week's episode, which will apparently be the rest of this North Texas University show. Kevin and Mike Von Erich will take on the Freebirds in the main event. "Until then, so long"! After the credits roll, we get what looks to be a quick TV commercial for next week's show, telling us to tune in to "the world's greatest rasslin' show". Huh. I don't think I've seen--or noticed-- these promotional spots, before.

Why'd You Watch This?:
While the change of venue adds some variety, there's very little to see in this episode. When the most interesting things are the cat-fight and the debut of BUCK ZUMHOFE... you know you can skip this one.