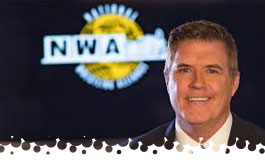 Sean Mooney is officially a part of the NWA and hosts World Champion Nick Aldis at the podium. Aldis sincerely welcomes Mooney to the program before humble bragging about how he's not a man who brags. He puts Flip Gordon over as one of the most formidable wrestlers in the business, but when he's in the ring against the National Treasure, he becomes "Flop" Gordon. Aldis declares himself to be the greatest world champion of the modern era. Mooney reminds Aldis that he had Marty Scurll escorted from the building at Hard Times. Crowd chants "coward." Aldis argues that he needed Scurll gone to maintain the integrity of the World Championship and because he calls all the shots. Furthermore, he already had a sitdown talk with Scurll, and it will air later.

Royce Isaacs (with May Valentine) vs. Andre Guhn

Isaacs enjoys a slight size advantage and overpowers the newcomer, Guhn. Guhn leap frogs to gain an opening, but Isaacs cuts him off with a dropkick to the knees. Fisherman suplex by Isaacs gets 2. Crowd chants "Andre" as Isaacs targets the head. Isaacs misses a head of steam and Guhn dropkicks him out of the ring. Isaacs overhears Rinauro call him neutered and gets into his face. Isaacs rushes back to avoid a countout and Guhn nearly steals it with a roll-up. Isaacs finishes with a pop up German suplex at 3:16. Ambitious squash that tried to weave extra story threads.
Winner; Royce Isaacs

Video recap of Eddie Kingston facing a Dawson on the behalf of Pope D'Angelo Dinero. Kingston ended up getting ambushed by the other Dawson and taking a bad bump into the buckles.

Women's Champion Thunder Rosa, Melina, and Marti Belle gather at the podium. Melina takes credit for getting the ball rolling for Rosa's victory. The interviewer tries to give the mic back to Rosa, but Melina talks over her. Allysin Kay gets her rematch next week. Rosa finally gets a chance to talk and vows victory over Kay, because she will defeat her every time. Rosa says her title win was the most incredible moment in her career. Melina cuts her off, saying they'll save the emo crap for another millienniel. Great stuff that nicely plants the seeds for Rosa splitting from Melina, likely sooner than later.

Marty Scurll complains about being forced to wait for Nick Aldis to show up to their sitdown chat.

Video replay of Ricky Starks advancing through the TV title tournament and claiming the gold against Trevor Murdoch.

David Marquez hosts TV Champion Ricky Starks at the podium. The fans love this guy. He puts over his accomplishment of beating three tough, first-time opponents to win the belt, and now he has to fill the shoes left by the great TV champions in history. Starks isn't looking to rewrite the TV title history, but it's time to add some extra pages. Apparently this means calling out Zicky Dice, who answers the call. Dice complains that he'd be the champion if the NWA hadn't brought in some mutant (Dan Maff) and they'll be hearing from his lawyer. Dice claims his accessories cost thousands of dollars, including a $16,000 fannie pack. The point is Zicky Dice IS television and should be the champion. Starks says Dice's mouth is writing checks he can't cash and challenges him to a title match here and now.

The 6:05 time limit is in effect. Dice is a little too proud of himself for hitting a shoulder tackle and shakes his pelvis. Dice counters with an atomic drop, but Starks comes back with arm drags and dropkicks. Dice flies into an axe handle smash, but he saves face with a clothesline. Dice's Northern Lights suplex gets 2. Galli announces that if the TV Champion wins 7 matches, they get a World title shot (that includes time limit draws). Starks rallies with Sling Blade and a missile dropkick. Starks counters with an atomic drop and his Pedigree (named The Stroke) finishes at 4:13. Solid action with a great pace, **½.
Winner and still TV Champion: Ricky Starks

NWA Tag Team Champions Eli Drake and James Storm join Joe Galli at the podium. Fans are happy to see them and chant "Talk to us." Do they serve adult beverages in this studio or something? Galli wants to know if they have a team name yet. Drake says just call them champs. Storm is enjoying a beer and his catchphrase is interrupted by Aron Stevens and The Question Mark. Stevens is goofing around with his Mongrovian black belt. Stevens brags about still being National Champion after a display of bravery against Scott Steiner. Galli claims Stevens chickened out and left his buddy to suffer the consequences. Stevens argues he had somewhere to be. Storm mocks Stevens' karate interests with "Wataaa" jokes. Stevens hopes Storm is sterile (LOL!). Storm keeps the dad jokes coming and it gets over with the fans. Drake keeps asking Galli for a favor until he agrees, and asks him to tell Stevens and Question Mark to take a line in the Eli Drake and James Storm deli, because they're going to punch his ticket. The champs leave as Stevens rants about gunning for the tag titles. Trevor Murdoch randomly joins the party and puts over his trip through hell at Hard Times. Murdoch respects Ricky Starks, but has no respect for Stevens because he's always running. He reveals himself as Steven's next challenger, and Question Mark chops him down with Mongrovian karate. These guys were having so much fun and it was infectious.

Marty Scurll is still waiting for Nick Aldis to show up. Scurll declares this to be bush league. Aldis finally shows up and places the World title next to him on the ring frame. Aldis claims he tries to be a nice guy but he gets really pissed off that despite doing everything right, everyone acts like he's some @sshole. Aldis resents Scurll for letting him down despite their long history together. Scurll gets a life changing deal but he still wants to take the NWA title, which now defines Aldis. Scurll argues that fans are always telling him that he should be a world champion and it makes him feel like a failure. Scurll wants a shot at the title, but Aldis doesn't want to because he already beat him last year at the Crockett Cup. Scurll vows to not go away. Aldis caves and agrees to give Scurll his shot at this year's Crockett Cup, but since he's calling the shots, he wants Scurll to personally refund all the fans in attendance if he loses. Scurll needs to consider these terms.

Final Thoughts: This was a talking heavy reset show after Hard Times and it was awesome. I love all the rich stories this show manages to tell. If I haven't convinced you to follow Powerrr yet, then I'm not doing this show justice.