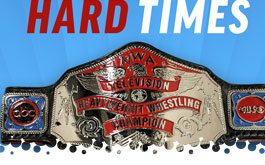 All tournament matches have a 6:05 time limit. Armdrag by Murdoch and a dropkick. Question Mark answers with a missile dropkick. Murdoch misses a lariat and hits the ring post. Mark unleashes Mongrovian palm thrusts to Murdoch's injured parts. Overhead belly to belly suplex by Mark gets 2. Murdoch comes back with a flying bulldog. Mark stands right up, so Murdoch hits a second top rope bulldog for the win at 3:13. Fine start to the tournament, **.
Winner: Trevor Murdoch

Maff is officially representing Ring of Honor. Dice doesn't know how much trouble he's in as Maff plows through him with a shoulder tackle and lights him up with chops. Dice gets into it with punching and hits a bulldog for 2. Dice counters a splash with knees into the shoulders and targets the back. Maff answers with a half nelson suplex! Dice flies into a spear! Maff hits a running cannonball and finishes with a back senton at 3:07. Good intensity in this one, **.
Winner: Dan Maff

Cross is also representing Ring of Honor. Starks is fired up and carries a child down the steps during his entrance. Starks gets dropkicked to ringside and Cross catches him with a second attempt dropkick through the ropes, and then hoists himself around the ring post for a super cool elbow drop. Cross cartwheels over the top rope, but Starks cuts him off for some old fashioned body shots. Starks targets the neck with quick attacks. Cross rallies, hitting a springboard crossbody for 2. Cross's double stomp also gets 2. Starks is reeling as Cross hits a cutter. Cross misses the SSP and Starks hits Buster Keaton for the win at 3:53. Great sprint, **¾.
Winner: Ricky Starks

David Marquez hosts Tim Storm at the desk. Crowd loves Storm and his new "Mama Storm" t-shirt. Storm thanks his "family" in the audience, and puts over the closeness of the NWA and it's fans. His scheduled opponent, Mr. Anderson, isn't going to make it tonight, and he's going to take the BYE if he must.

Stu Bennett demands the crowd's attention, as he's afraid that he's got some breaking news: the next NWA pay-per-view will be moving to a bigger building, and it's going to be the Crockett Cup.

This is triple threat format and it looks like guys can only tag their partners. Drake gets a hot start, and Morton assists in a double elbow on Lattimer. Drake and Morton tie up Isaacs for rapid fire attacks by Storm and Gibson. Storm wants a handshake from Gibson, but Isaacs bumps them into each other. The Wild Cards take over after Kamille attacks the eye of Gibson. Storm takes a Wild Cards beatdown and the ref misses his tag to Drake. Gibson finally stumbles back in, and the distraction lets Storm hit a chinbreaker and senton. Drake gets a hot tag and flattens Lattimer with a side Russian leg sweep. Drake's elbow drop gets 2. Lattimer responds with a powerbomb. Gibson avoids a head of steam, and Morton gets a hot tag and hits Lattimer with a Canadian Destroyer. Kamille and Gibson get into it at ringside. Drake catches Morton with Gravy Train for the win and titles at 8:10. This was well paced and had unique dynamics due to the format. Did not expect this outcome either, **¾.
Winners and new NWA Tag Team Champions: Eli Drake and James Storm

Drake and Storm put themselves over at the desk. They don't have a team name, so just call them "champs."

Bell rings and they can't wait to tear into one another. Kay stomps a mudhole into the challenger. Northern Lights suplex by Kay gets 2. They trade palm thrusts to the face. Rosa knees the head to escape a sleeper, but Kay stops her with a neckbreaker. Kay brings Rosa back into the ring with a vertical suplex. Rosa gets back into the match with methodical offense. Rosa dropkicks Kay into the first row of fans. My stream gets wonky, as the picture speeds up, but the sound doesn't match what's happening, and then the picture just freezes. During the glitches, Kay survives an armbar and starts throwing desperate attacks. Rosa hits a snap German suplex for 2. Rosa goes for a rolling senton off the apron, but Kay counters with a powerbomb on the ring frame! Crowd is HOT for this. Rosa blocks Kay's power slam into a roll up for 2, and goes for a flying Codebreaker, but Kay sadly botches the counter, and Rosa comes back with a Code Red. Rosa applies an Octopus submission, but Kay counters into a Tombstone Piledriver, but ROSA KICKS OUT! Fans chant "This is awesome" and "Fight forever." Rosa recovers with a missile dropkick, but Kay hits an AK-47, but ROSA KICKS OUT AGAIN! They strike their way back to their feet and Rosa explodes into a guillotine head lock, but Kay backs her into the buckles. Top rope sunset flip powerbomb by Rosa! Kay desperately throws a roundhouse kick, but Rosa maneuvers her into an armbar. Kay powers out, but Rosa counters with the Thunder Driver for the win at 16:45! They had the crowd eating out of their hands despite one really unfortunate botch, Great coming out party for Thunder Rosa, ****.
Winner and new NWA Women's Champion: Thunder Rosa

Marti Belle and Melina joins Rosa for her celebration.

Joe Galli hosts Marty Scurll at the desk. The Villain is still waiting for his shot at Nick Aldis and the 10 pounds of gold and thinks the paying customers should get a title match tonight. Aldis answers the call and is distracted by fans chanting "coward." The champ is flabbergasted by the audacity of Scurll to walk into his house and throw stroke around as if this were Ring of Honor. Aldis is willing to defend his title against Flip Gordon, so long as he gets to call all the shots going forward when it comes to the NWA dealing with ROH, and that includes having Scurll vacate the building.

They trade forearms, which causes tempers to flare and they trade chops. Maff explodes into a spear! Maff rakes the back, Murdoch blocks a chop, so Maff bites the forehead! Maff misses a splash in the corner and Murdoch hits the flying bulldog for the win at 3:31. Hard hitting contest with an abrupt ending, **.
Winner: Trevor Murdoch

They exchange holds and Storm scores a shoulder tackle. Starks lands on his feet in a hip toss. They trade chops in the corner. Storm hits a spinebuster for 2. Starks hits a dropkick but misses a stomp off the ropes. Backbreaker by Storm gets 2. Jawbreaker by Starks, but Storm cuts him off with The Perfect Storm, but Starks kicks out! Styles Clash by Starks only gets 2. Starks counters into a crucifix bomb for the win at 4:49! Loved the pacing and sense of urgency in this one, ***.
Winner: Ricky Starks

This is heel vs. heel, but the fans like Steiner, as he declares that Stevens "sucks." Steiner reverses a wrist lock, forcing Stevens into the ropes. Steiner rips open Stevens' gi for knife edge chops. Steiner clears Stevens from the ring despite somewhat hobbling through his offense. Stevens is selling his ass off to keep this interesting and rakes the eyes, but Steiner cuts him off with a suplex. Steiner's belly to belly gets 2. Stevens boots the face and gets 2 on a rope assisted cover. Steiner blocks a flying ax handle and nails a flatliner. Steiner applies the Steiner Recliner, but the Question Mark breaks it up for the DQ at 5:53. This was... pretty bad, *.
Winner via DQ: Scott Steiner

Steiner puts Question Mark in the Recliner for good measure and punks out the referee.

Gordon ducks a clothesline and dishes out a flurry of strikes. Aldis is forced to take a breather at ringside, but Gordon pursues and teases a suplex through the podium. Back to the ring, Aldis scores a waistlock takedown, but Gordon counters into a hammerlock. Gordon wrenches in a headlock while fans duel with "Let's go, Gordon" and "NWA" chants. Enziguri by Gordon, but Alids blocks a corkscrew attack and takes a breather. The ref prevents Gordon from diving, so he leaps over him for a somersault plancha! Gordon reverses into a cross armbreaker, but Aldis answers with a dead lift single arm powerbomb. Overhead belly to belly by Aldis! Fallaway slam by Aldis, followed by a top rope fallaway slam. Vertical suplex by Aldis. Figure four by Aldis, but Gordon reverses to force a rope break. Gordon comes back with a sunset flip and spin heel kick to the face. Springboard spear by Gordon! Second rope moonsault by Gordon gets 2. Aldis teases a top rope German, but Gordon lands on his feet. Aldis rebounds with a Tombstone Piledriver! Flying elbow by Aldis, but Gordon counters into a crucifix pin for 2. Crossface by Gordon! Aldis survives, and they slug it out. Gordon blocks a Sharpshooter and hits a pair of springboard stunners, but Aldis kicks out! Aldis reverses a monkey flp into a pinning situation for the win at 15:17! Good, well-rounded babyface performance by Gordon, and Aldis looked properly tested down the stretch, ***½.
Winner and still NWA World Champion: Nick Aldis

They waive the time limit because there must be a winner. Murdoch looks totally battered during his entrance. Murdoch goes for a German but Starks lands on his feet, so Murdoch hits a big boot to the face. They engage in a Greco-Roman knuckle lock and Murdoch bends Starks over. Starks powers up, so Murdoch hits a side Russian leg sweep. Starks flying shoulder off the apron is blocked by a Murdoch head butt. Murdoch reverses a whip into the steps. Starks comeback is cut short when Murdoch dumps him unceremoniously over the ropes. Back drop driver by Murdoch gets 2. Murderous lariat by Murdoch gets another nearfall. Starks comes back with a sit out powerbomb but Murdoch kicks out! Spear by Starks gets a great 2 count. Starks finishes with a Pedigree at 9:24! Murdoch stiffed the life out of Starks, so he looks like a world beater in victory, ***¼.
Winner and new NWA TV Champion: Ricky Starks

Final Thoughts: Breezy show full of well paced, intriguing action. Rosa and Kay totally stole the show. Take away the Steiner blemish, and you have a completely digestible, pleasing event from beginning to end.