Personally, I've never wild about Marvel‘s "horror" characters. In their print medium, Marvel/Atlas/Timely ran with a lot of monster stories in their non-superhero years of the 1950's, but they really jumped into the world of horror and monsters in the 70's. They created or adapted versions of Dracula, Frankenstein’s Monster, the (Living) Mummy, and even their own spins on the supernatural, like Ghost Rider, Morbius, and even the Wolfman.

While all these things mght unusual or spooky, they never really appealed to me. I’ve pretty much been a lifelong Marvel follower (since the mid-70’s), and have had various encounters with these "horror" characters. To me, it always seems odd whenever a superhero meets up with a horror character. Even in recent years, when Blade has been inserted into Avengers comics, it still feels off. In a world of guys with radioactive spider-blood, mutants, a frozen WWII super soldier, a Norse god, an alien who eats planets, and even a talking duck... vampires, zombies and monsters don’t seem very special and get overshadowed. In mind at least.

Thus, I went into Marvel's new “Werewolf by Night” feature on Disney+ with low expectations. But hey, it's Halloween HavoK, so the timing was right. Yet I’m happy to say that, right out of the gate, my interest is piqued with their opening title graphic. One that evokes connections to old “creature features” of the 1940’s. Complete with a grainy film effect and shadowed text. Hey, I'm all about typography setting a mood. If you can nail this, and jump head-first into your concept in the first few seconds, I'm definitely interested. 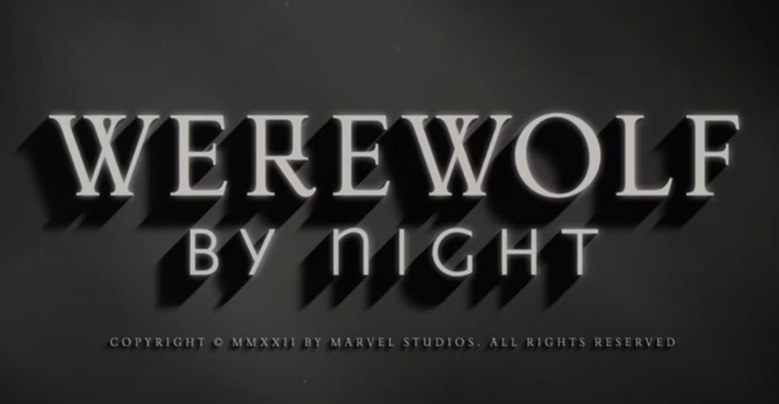 Another important mood-evoking detail is also established, right out of the gate: the entire thing is filmed in black-and-white. Well, black-and-white-and-RED (for emphasis). Well done. Game on. Suddenly I don't feel like I'll be messing with my phone as the next 70 minutes roll by.

The story opens and we're slowly introduced to a group of peculiar individuals. All of whom are (supposedly) professional MONSTER-HUNTERS and have been invited to this secret location to particpate in a MONSTER-HUNTING CONTEST for the magical Bloodstone. Natually, the Bloodstone is shown in our third color of RED! It's valubale to a monster-hunter, because it can destroy monsters easily. If you're like me, at this point you're probably hearing Rob Halford, in your head, singing "Blooooodstone"! 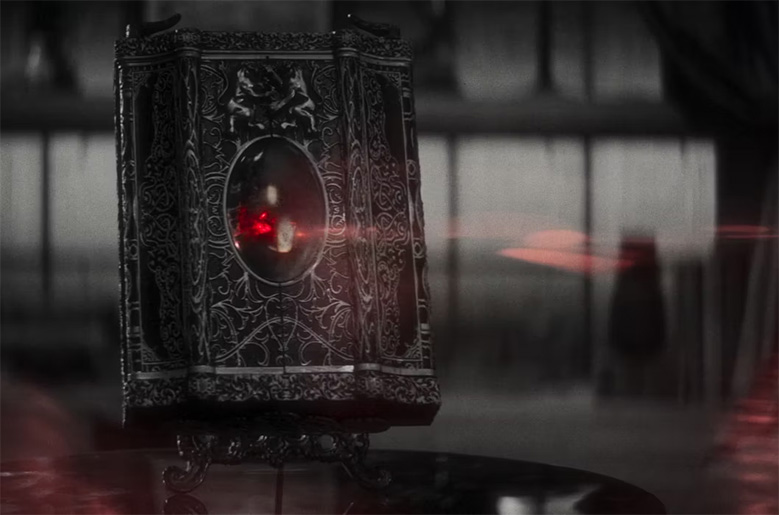 As the invitees gather, they're given a humororus puppet performance, from the Bloodstone's former wielder: Ulysses Bloodstone. Ulysses is actually a corpse, yet his recorded post-humous message details the rules of the monster-hunting game. Naturally, he ends his speech by evoking the spirit of the Crypt-Keeper with an horrendous pun! Yes, I am definitely onboard and setting sail with this show. 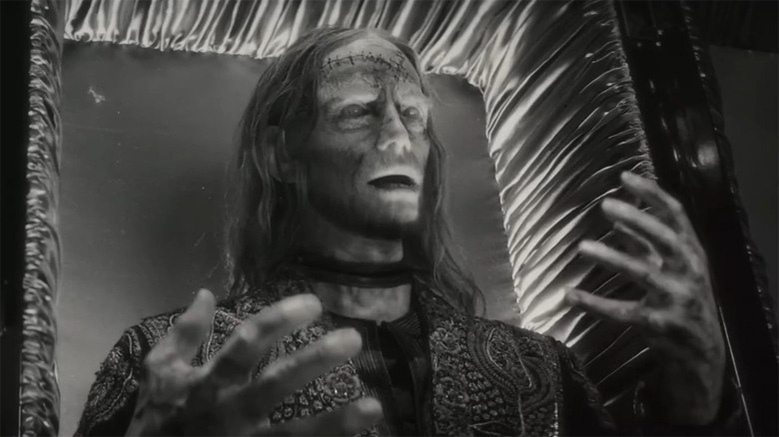 The contest then begins, as each particpant is given a timed entry into the hunting field (sorta' like WARGAMES, if you will). Once there, it's a free-for-all, as the particpants not only have to hunt the monster, but they can take each other out, as well. Reminds me a little of an old 1920's horror pulp movel, or even Agatha's Christie's "And Then There Were None". Among the hunters are Elsa Bloodstone (played by Laura Donnelly), the somewhat sarcastic and aloof daughter of Ulysses and "Jack" (played by Gael Garcia Bernal). Wait...Gael Garcia Bernal?! Cool. I could get my Old Ladyto watch this (yet she has a hard stance against watching any "scary" movie or show. Even the Daniel Tiger Halloween Special). 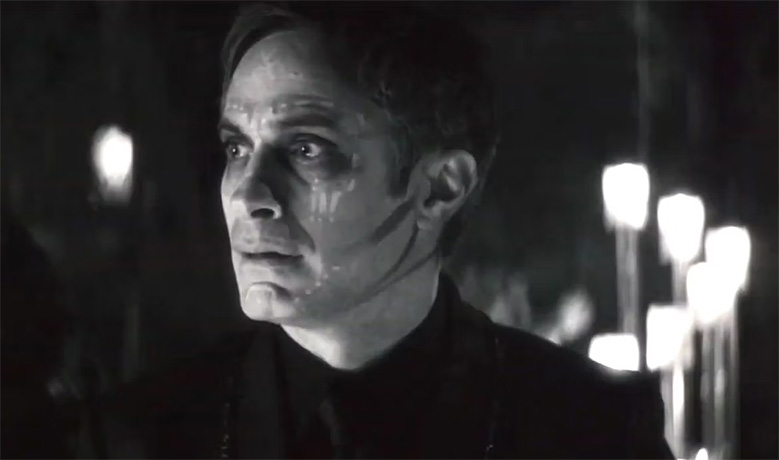 Waitasec, I thought this was "WEREWOLF BY NIGHT"? Where's the freakin' werewolf? Well, as you can probably guess: he's coming. It's a very mild twist, and you might have guessed it already, but I'm nice enough not to spoil it for you. However, there might be more than one Marvel "horror" character. If you're a Marvel Comics fan, you won't be disappointed. However, one mild disappointment to me is the actual physical appearance of the Werewolf. Maybe it was the dark lighting, but he reminds me of the 1970's "Wolfman" from TV's "Monster Squad"(the Saturday morning live-action stinker; NOT the campy mid-80's "Wolfman's Got NARDS" movie). However, this may have intentional, as he kinda' resembles the 1940's Universal Studios version of the Wolfman. 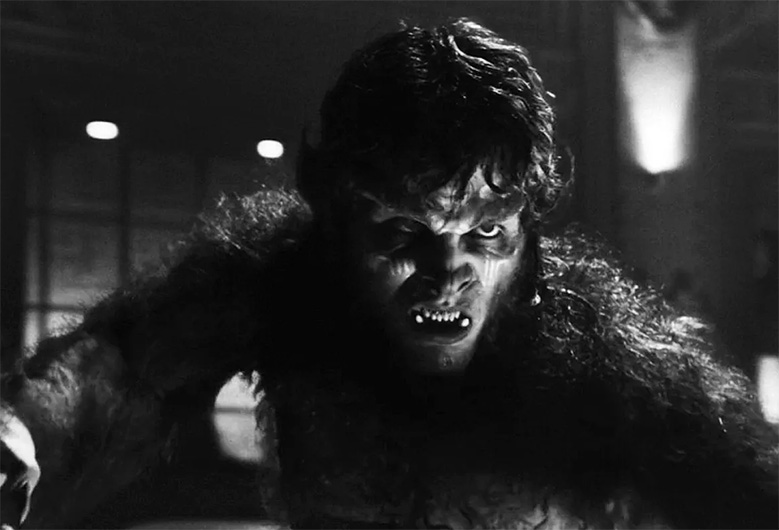 Constantly having origin stories has been a criticism of Marvel features, of late. Thus, it's important to note that while this is an introductory feature, it's not an origin feature. I won't go into every little detail and "man-splain" all the little Marvel Comics connections to you ("in the comics, THIS character debuted in Issue #45 and is the ..."). I mean, I respect you and your time and some of this stuff you may or may not know... nor give a crap about. Heck, I got through almost this entire article without dropping my crappy "shouldn't a guy named Jack Russell be a Were-TERRIER by Night?! Hey-oh! Ahem....anyways, your big takeaway from this article should be that I actually recommend watching "Werewolf by Night". To paraphrase my esteemed colleagues and close personal friends, here on Da' Site: 4 stars or Mild Thumbs Up. It's an entertaining self-contained story that, most importantly, doesn't take itself too seriously. There's some suspense, some gore (you should be at least 14 to watch), some humor, some twists, and even some all-out monster fighting. It's not the MCU's next "Iron Man" or anything, but it is a decent hour-plus of horror-tinged escapism (and better than "Eternals"). A solid Halloween HavoK entry.