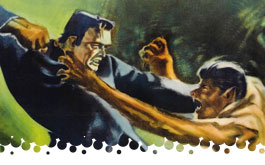 #HalloweenHavok has led us here. By my math, it looks like it's been three long years since I've dared to cover a Halloween movie. Not to say I haven't tried, though. I had plans for the '16 and '17 editions of Halloween Havok, as I unearthed some oddball Halloween or monster movies. But they were absolutely wretched and we shan't speak of them. So for this year, I went with a "classic". Now, is this year's movie "classic" simply because it's OLD...or is it actually worth watching? Well, YOU could watch it...or you could spend a few minutes reading THIS article.

Well before we had junk like "Batman vs. Superman" or "King Kong vs. Godzilla" on the big screen, we had 1943's "Frankenstein Meets the Wolf Man". First off, you have to love that title, because it's not saying they're going to duke it out. It says that they're going to simply "meet". So maybe they hang out, play cards, share a few beers, or even have a Monster Party! This movie also make me wish we had the Internets back in 1943, as there would've been online, obsessive, fan theories and debates over this. A popular, escapist, sci-fi/horror, big-time movie franchise that had spawned multiple sequels? I'm sure the following would've been a reddit or message board thread, back then:

BaronVonDougenstein: "I liked it for what it was. Although I thought there were inconsistencies and plot holes that ignored parts of 'Son of Frankenstein'. I blame that on the switch in directors."

Paul H: "Hey fellas, what's the big idea?! There's a war going on. Turn off your electricity and conserve for the war effort. #NeverForgetPearlHarbor"

Like modern superhero movies, this flick has a somewhat complex backstory as it's part of the Universal Pictures Monster franchise. This is the fifth in the Frankenstein series and the second in the Wolf Man series. Lon Chaney, Jr. continues his role as "Larry Talbot, the Wolf Man". Yet Chaney actually played Frankenstein's Monster in the fourth entry in the Frankenstein series ("Ghost of Frankenstein"), suceeding Boris Karloff. So Bela Lugosi; who had played "Ygor" in the previous two Frankenstein movies; takes over as the Monster. A promotion of sorts. There is some debate on who should be properly credited as "Frankenstein's Monster" in this flick, as stuntman Gil Perkins actually performed most of the scenes. You have to figure this was a marketing thingie, as having "Bela Lugosi" on the poster was definitely a bigger draw. Thus, you could say that Gil Perkins was the Colt Seavers of his time.

So with all them details outta' the way, is this movie worth a darn? First off, I could use the term "good for its time", constantly, as it's obviously tough to compare it to modern movies. Several scenes are obviously movie sets, but they work well. The blatant painted night backdrops and manufactured nature elements don't distract too much. It was a common look, back then, and having it in black-and-white helps to hide some of the imperfections. The biggest special effect is used a few times: the fading transformation of Chaney's face into the Wolf Man. They simply fade identical shots and poses of Chaney, but with more and more Wolf Man make-up applied, each time. The story relies more on the costumes/make-up than any special effects. In terms of technical aspects and overall production, you could say they nailed it.

Storyline-wise, the first half hour or so is straight-up sequel to "The Wolf Man". Two graverobbers are planning to loot the late Larry Talbot's tomb...but find that his body is missing, with only wolf bane left in the coffin! Things jump to Cardiff, Wales, where a seemingly amnesic Talbot has been adminstered to an asylum for a head wound. The optimistic Dr. Frank Mannering admits Talbot and wants to explore his condition through psycho-therapy. It turns out, Larry Talbot officially died five years ago, so the crotchety Inspector Owen thinks there's something fishy. At night, Talbot sees the full moon, changes into the Wolf Man (including the previously mentioned "special effects" scene), rips off his bonds and runs through the town, eating a few people. When he wakes up the next day, a guilty Talbot is ashamed that his lycanthrophy curse will cause him to kill again. Talbot escapes the hospital, again, and runs off to find someone who can help him. 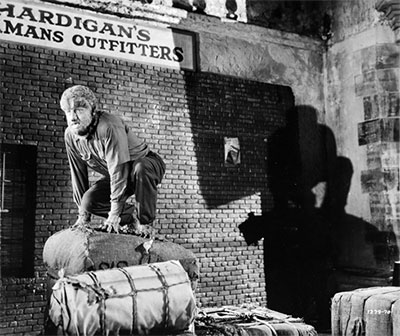 Talbot wants to kill himself and end the curse, not be cured, as his journey eventually leads him across the Channel to the ruins of Castle Frankenstein. He's heard Dr. Frankenstein has done some nifty stuff and may be able to help him. Talbot is distressed when he discovers that Frankenstein has died, but he soon turns into the Wolf Man and escapes into the wild. The typical "Frankenstein Pitchfork n' Torches Mob" gives pursuit, but it's ended when Wolf Man falls into a weird ice cave. There, he actually MEETS Frankenstein's Monster, who helps him search for Dr. Frankenstein's notes. Okay, seems like a long shot for Talbot, as the doc was known for weird experiments and not necessarily, y'know, CURING WEREWOLVES. Whatever... our heroes finally meet. 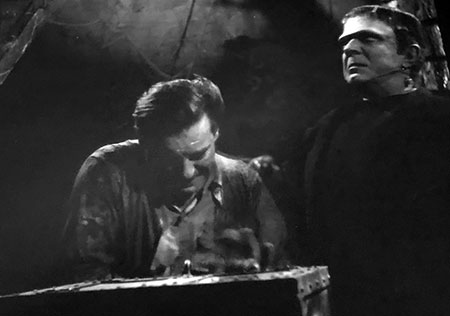 The last 40 minutes then establish the real meat of this flick. The gypsy woman Maleva and Baroness Elsa Frankenstein both enter the picture, while Dr. Mannering tracks down Talbot. Things settle down for a bit, as there's even a musical interlude with this Burgomeister guy: 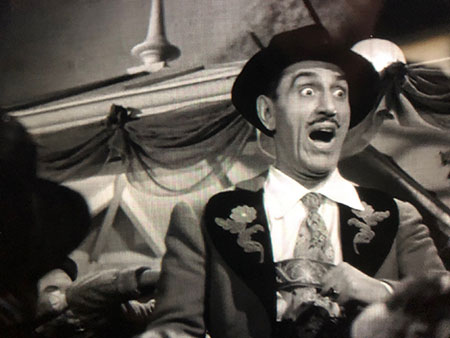 Things all go to heck when the Monster randomly wanders into town, knocks over stuff, and causes mass hysteria. Talbot manages to help his new buddy escape, as they ride away on a wagon. The townspeople, of course, are easy to assemble a mob to hunt down the two weirdos. Well, the same town has been attacked by the Monster in four previous movies, so they're probably getting pretty good at assembling.

Mannering, Maleva and Elsa manage to locate the Monster and Talbot in the castle ruins. They observe of the two: "they're friends". Aww. That's nice. See, the title says "MEETS" not "VERSUS". With Mannering's help, plus the notes and lab of Dr. Frankenstein, Talbot feels they can all work together to end the werewolf curse. As Mannering is setting up an experiment from the notes, Elsa ask him to also end the Monster's life to "clear the name of Frankenstein". For whatever reason, Mannering suddenly decides that he can't end the Monster, rather he wants to "see it at its full power". How a psychiatric doctor suddenly wants to be a mad scientist is a little weak...but just go with it. Mannering wires Talbot and the Monster in Dr. Frankenstein's hydro-powered electrical devices and the experiment is on.

At this point, we have about 5 minutes left in the movie, so let's get to the main event. The lab explodes as Talbot sees a full moon and transforms. The Monster is rumbling around in a craze, grabbing Elsa...because that's what monsters do in the 40's. Wolf Man to the rescue, as he saves Elsa and begins fighting with the Monster. The fights' a little funny, as Wolf Man has to sell for the Monster's lumbering. Meanwhile, the angy mob has detonated the nearby dam, causing the castle ruins and lab to be flooded. The townspeople celebrate, as they've seemingly wiped away both weirdos with the flood. Cue up "The End" and we're done.

Why'd You Watch This?
Yeah, a very lackluster ending, as it feels like a PPV trying to cram in a main event, due to time constraints. Some critics of the 40's thus considered the movie a big letdown: 75 minutes of build-up for a 3 minute fight that ends with outside interference. But again, this wasn't "VERSUS"...it was "MEETS". The story moved along well enough at a logical pace. The final few minutes and Mannering's sudden change in plans is weird and probably what killed the plot. The rushed "main event" was a 1.5 star stinker, but the rest of the card was probably in the 3 star range.

These Universal monster movies left a lasting impression, nonetheless. Mainstays of pop culture emerged from them. For one, the whole "werewolf emerges upon seeing the full moon" thing was established. Also, while he's defined as the "Monster", the name "Frankenstein" began to refer to the Monster. Even today, most people see the Monster and say "hey, that's Frankenstein". Then some nerd will correct them and say "um, that's actually Frankenstein's Monster".

While it's old, by no means is this a "classic". It is entertaining and, to me, was more enjoyable than any modern monster/horror film I've seen recently. I'd give it a mild recommendation; as long as you understand to grade with the "good for its time" disclaimer.