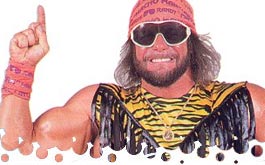 Valentine comes out with one of his ring robes, and Beefcake is trying to be a bad-a$$ with his jeans and cowboy boots matched with a gold vest. Okerlund says Valentine is wearing a "kinky bathrobe" and for whatever reason, Beefcake snatches the Hillbilly Jim LFN figure from the desk. Valentine says he wears the robe because he has class as one half of the dream team.

We get a brief clip of a Six-Man Tag Team Match featuring Valentine, Beefcake, and Valiant taking on Davey Boy Smith, Danny Spivey, and Pedro Morales, no doubt taped shortly after WrestleMania 2 when Dynamite Kid was out of action for a couple of weeks. Since we don’t see the finish, there’s no need doing a recap of a 90-second rest-hold. Back in the studio, Okerlund asks Valiant when they’ll get a shot at the "brand new Champions." BRAND NEW? IT WAS THREE MONTHS AGO! Valentine wants to know why we didn’t see when he put the Figure-Four on Davey Boy. Okerlund directs his questions toward Beefcake but doesn’t stop to take another shot at Valentine’s robe, saying he was hanging around Adrian Adonis too much. Valentine plays it straight, saying he wore robes long before he met Adrian, and he loves the women and the Championships.

We come back from the commercial break, with Okerlund promising a "This is Your Life" for Johnny Valiant. They have a special long-time old friend of Valiant. From Pittsburgh, PA, here’s Dave Gillespie. It’s been 15 years since they’ve seen each other, and he says Valiant has gotten heavier since then. "Heavier in the pocket book." Mr. Gillespie then says Johnny was 2nd or 3rd from the bottom of his class. Valiant says he was the Captain of the Football team. Okerlund produces a photo of four people, trying to use that as proof that Valiant is lying. Last I checked, there’s more than 4 people on a football team. Valiant is also called out for his wrestling and basketball credentials. Well, this turned into a whole lot of nothing.

What’s it been, nearly a decade since the Blackjacks were riding roughshod over the tag team division in the WWWF? At this point, Lanza was retired and worked for the company as an agent for the next decade or so, sometimes seen during those TV brawls featuring the referees and agents trying to restore order. Lanza makes fun of Lord Alfred’s golfing skills. Okerlund acknowledges Lanza’s retirement and his work behind the scenes. Lanza says he no longer has the itch to get back in the ring. We see highlights from way back in 1973 (Okerlund’s estimation) and footage of Lanza in action against "Lee Wong". I should fact check that one, but I’ll take his word for it. We see the finish of Lanza winning with the claw hold. Back in the studio, Lanza calls attention to the "young kid announcing", Vince McMahon. Then we throw it to footage of Lanza getting physical with Bobby Heenan from "Winnipeg." I have no idea where this is from, but I’d guess taped within the last 2 years. Lanza talks about his relationship with Bobby Heenan, saying Heenan was his manager for the better part of 15 years, and there’s no love lost between them to this day.

I’m sure we’ll get some hype about his body slamming Big John Studd. Jack Lanza is still on the set when Tonga is introduced. Okerlund corrects himself, introducing Tonga from Samoa. He says Tonga stunned fans all around the world recently as we throw it to footage from the June 14th episode of Championship Wrestling. Big John Studd easily handles Jim Powers and Rick Hunter in a Handicap Match, but King Tonga shows up and slams the big man, who was still offering $15,000 for anyone who could slam him. Of course, Studd and Heenan don’t pay up. Back in the studio, Okerlund says Tonga did something no other man did before him. ARE YOU F*CKING KIDDING ME?! Tonga says he’s been watching Studd pushing people around, and Studd was unwilling to accept his challenge. Tonga confirms he hasn’t received the money that was promised to whoever could slam Studd. ARE YOU SAYING HEENAN WEASELED ON THE DEAL?! Tonga says he’ll slam Studd again to get his money.

We’ve got 18-minutes left and this is the last guest of the week, so this should be interesting. Okerlund surprisingly corrects himself from earlier, reminding us Andre the Giant slammed Big John Studd at WrestleMania, but who cares, Andre’s been suspended from the WWF. Savage really loves that "Hulk Who?" shirt. He’s worn it several times already on this program. Someone plays a slide whistle as Savage takes his seat. Okerlund asks about Elizabeth’s tennis game, and Savage shuts him down for trying to start that again.

Recycled from the June 14th episode of Championship Wrestling. Lockup and Savage snaps Monti over with an arm drag. Crisscross and Monti with a hip toss. UH-OH. Savage no-sells a second toss and clips Monti with a big clothesline. He hangs Monti over the top rope as we get comments from Tito Santana. Face it, Tito, your time in the sun is over. Back inside, Savage with a powerslam, knee drop, and flying elbow for three at 1:24. The crowd chants "Tito" to get under Savage’s skin. Savage’s squash matches are always a highlight.

Back in the studio, Savage says nobody does it better and barks at Elizabeth to reassure him. Okerlund gets on the telephone with an alleged fan of the Macho Man. There are some technical difficulties. "What are you doing, stroking me?" The woman corrects Okerlund, saying she’s a big fan of Hulk Hogan. Savage gets on the phone with "Florence" and the segment is falling apart at an alarming rate. The phone call wraps up, and I’m sure things will pick up again. Okerlund says they have a psychologist on the set. We return from commercial break, with Okerlund saying fans have been asking for months what makes the Macho Man "so macho." Dr. Elford Kissenbaum is here to give us those answers, and yes, I made up the spelling. Savage doesn’t want Elizabeth sitting too close to this guy, yelling at Alfred to move on down the line. The doctor says he’s done work on people like Clint Eastwood and John Wayne. Randy was his first live subject who claims to be "macho." We throw it to tapes of their sessions, which I’m sure weren’t taped an hour earlier. They cut to the therapy room as Elford asks Savage about word association. Savage says he plays to win, and this is non-title. The first word is "Macho", and that’s himself. "Pump" is pumping iron, and Hulk Hogan isn’t the only one with a key to the gym. "Gun" is the fastest gun in the world. "Belt" is what he’ll do to Hogan to see if it gets him mad. "Kitten" is what women are when he looks at them. "Female" is a race of people that admire and lust after the Macho Man. "Sucker" is Hulk Hogan. "That was a good one!" Finally, "Animal" triggers Savage about George Steele. Back to the studio, Okerlund yells at Savage to shut up to let Kissenbaum answer. JESUS! In Savage’s case, his Macho is insecurity. Savage doesn’t appreciate the doctor’s findings, tossing the LJN toys at him.

Next week, we’ll see The British Bulldogs, Lou Albano, Corporal Kirchner, and another episode of the Dating Game. Savage storms the set as the credits are ready to roll, yelling at Okerlund to never embarrass him again as he rips his shirt off and slaps Alfred with it. Okerlund really had the balls to yell "shut up" at Savage earlier. In today’s world, Okerlund would be pooped on for trying to get himself over.

Final Thoughts: Hit and miss segments, with the hits and misses often coming with the same guests! The Savage segment started falling apart with the phone call, picked up a little, fell apart again, then picked up one more time with Savage’s outburst. The opening with the Dream Team was fine until they did the bit where Johnny Valiant’s long-lost buddy from high school discredited his alleged accolades. Not much to say about Lanza or Tonga, as neither guest was outstanding or offensive. This might’ve been the most subdued episode of the Okerlund hosting era (so far).