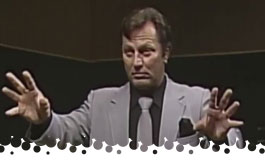 - Hosted by NOT Vince McMahon. "Mean" Gene Okerlund is filling in as our special surprise guest host, along with co-host Lord Alfred Hayes. Don't worry, Vince will be back on next week's episode. This week, Mean Gene will be joined by a list of guests that includes Paul Christy, S.D. Jones, Paul Roma, The Iron Sheik, Nikolai Volkoff, Fred Blassie, and Ricky "The Dragon" Steamboat.

Wait a minute... where's the Iron Sheik?! Okerlund compliments Volkoff on the one and only suit he owns. Somehow the conversation leads to Volkoff doing his best impression of a horse. I can tell within 30-seconds that Gene Okerlund doesn't have the same flare for the concept as McMahon.

- Highlights of Nikolai Volkoff vs. Tony Garea are shown from the April 22nd card held at Madison Square Garden.

Back in the studio, Okerlund brings up the news about the Chernobyl Meltdown in Russia. "The Swedes and Norwegians are hot... literally." Volkoff blames it on it being built with mostly American parts. "What has wings and glows? Chicken Kiev." The Iron Sheik joins the rest of his contemporaries after the commercial break. Okerlund yawns through Sheik's lines and asks him about his home country of Iran. Sheik calls him a JEW BUSINESSMAN and rambles about Persian goods, including Persian PUSS. Okerlund continues to insert real world news into his bad comedy routine. Sheik goes on a rant, complaining about being screwed in a recent match against the British Bulldogs. Okerlund calls attention to the Sheik's boots, which may or may not be legal. Okerlund dismisses Sheik's response and throws it to commercial.

SIDE RANT: GENE OKERLUND IS A F*CKING D*CK.

If Okerlund's shtick continues to be this bad, I don't know if I can endure 13 more episodes of him hosting. Okerlund and Alfred ponder the proper pronunciation of "Hawaii" with more comedy gold. Okerlund says they recently did a tour "down under" in Australia. Why is Steamboat randomly wearing a Saturday Night's Main Event hat. Steamboat says the weather was beautiful. Okerlund says they, along with other wrestlers, made a trip to the Lone Pine Sanctuary. We throw it to footage of them on location with some Koala Bears. Back in the studio, Okerlund says they are "stoned and smashed 24 hours a day." Steamboat says they sleep all day except to eat and go to the bathroom. Okerlund brings up the subject of Jake Roberts. Steamboat says you're bound to get hurt in this profession. We see the highlights from Saturday Night's Main Event, and you know it's a big deal when they've shown this clip on every show for the last couple of weeks. Steamboat says that everyone there compared his head hitting the concrete to a watermelon splatting. He's cut his hair and he wears the hat as a reminder of what was done to him and says this is just the beginning between them.

Imagine if Jones was Roma's partner as the Young Stallions. I guess they wouldn't have been Young, though, since Jones is well into his 40's. These two men were also on the "big Australian tour." Okerlund aggressive rolls his tongue pronouncing "Roma." Jones is speaking so loud like he's on the phone after bedtime and doesn't want to wake his parents. Roma says he plans on making a return to Australia in June.

- Paul Roma & "Special Delivery" Jones vs. Joe Mirto & Mike Angelo: Exclusively featured on TNT, and also on Australian editions of Championship Wrestling. We're Joined in Progress, with Roma coming off the ropes and hitting Mirto with a cross body press for two. Angelo tags in, with Monsoon burying him for having a soft physique. Roma takes him down and works the leg. Jones comes in and gets Angelo up for a slam (after three attempts). Whip to the ropes and Roma with a powerslam for three at 1:31 shown.

Back in the studio, Okerlund makes fun of Jones' flashy shirt. "Are we going to see Roma and S.D. Jones as a team more often? I'm going to say no, despite Roma's insistence.

You're probably asking who this geek is, and so far, in the WWF, he's a geek used on syndication. According to Mean Gene, he's here to do some magic tricks. Christy is from the outskirts of the Windy City, Chicago, IL. He comes out, shooting flares out of a gift-wrapped box. Christy doesn't bother sitting down. Paul Christy is a wrestler-magician-hypnotist. The three greatest drives are sex, power, and money. He keeps cutting off Okerlund and goes on a rant about sexuality. How many apartment buildings can you own, or Vacations can you go on? The only thing he doesn't have is power, and he's going to show us how he's going to program peoples' minds. He gets upset for some off-screen cues and rants like a maniac. Okerlund asks him to take a seat, as he's brought a legitimate magician to the show, Denny Lee. This show isn't just running off the rails, it's crashing into a school bus filled with Nuns.

Christy says as a great hypnotist, he goes one step beyond, and he's going to use this box to program the minds of everyone to believe what they are thinking is in his box. Someone drowns him out with a sound-effect machine, causing him to get flustered and smack the desk repeatedly with his box. I can't tell if this is a shoot or a well-orchestrated gag. Considering how bad Christy's performance is, I'm going for the former. We keep cutting to the same bored fans in the studio audience. He threatens to buy the studio and calls Okerlund motor-mouth for the 86th time.

We come back from commercial break with more Paul Christy (KILL ME). They do an awful card trick that is hardly a trick when you can fish the card out knowing what it's supposed to be. We have EIGHT MORE MINUTES OF THIS! I think the sound-effect machine is playing a flushing toilet. Denny Lee finally gets to speak up and talks about mind control. You got it wrong, Lee, it's PROGRAMMING. Okerlund brings back Volkoff, Sheik and Blassie for the following performance. This gives me time to research Denny Lee, and his name is Denny Haney, and was at least a known performer who unfortunately passed away in 2019 at 73 years old. Some geek comes out to do a mock recreation of a scene from Indiana Jones, swinging a large sword around like a goof. This leads to Denny hypnotizing a woman and placing her across the four sharp ends of swords, then removing them, giving the impression of her levitating. I didn't expect to see a genuine performance, but at least it wasn't more of that dumbass Christy.

Next Week: The Anniversary Show of TNT! VINCE MCMAHON WILL BE BACK! Very quickly, I just did some research on this Australian Tour the WWF ran, and indeed, they ran a couple of weeks at the end of February through early March, and another week shortly after WrestleMania 2. They'd return in July and September, so Australia actually predates Europe for WWF running multiple international tours.

Final Thoughts: This episode was... something. Gene Okerlund's performance as a host was cringeworthy for the first segment, and then we got the world's worst guest in the form of Paul Christy. OH, MY GOODNESS, WHAT THE HELL WAS THAT? Seriously, I don't know what I'm supposed to take away from that garbage. Were they deliberately burying Christy on National TV? Was the gag the fact he was a terrible promo? I genuinely think that whole segment fell apart and it became an inside-joke to make the guy die in front of an audience. This might be the worst episode of TNT I've covered, but the Christy segment is worth checking out if you're into watching someone have a meltdown and left to sink or swim with the material he brought.