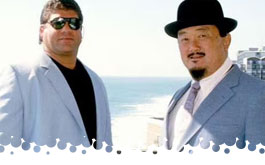 Adonis is sporting the leg warmers along with sweatpants, quite the look indeed. He calls the place a dump, quoting Betty Davis. Vince asks why Adonis has a left eye like the dog from the Little Rascals. "You must mean Spot, that really got over." Adonis does whatever he wants to do, whatever the rhyme or reason.

From the February 22nd episode of Championship Wrestling. Lockup and Roma with a hip toss. Roma is in all white, a far cry from his usual black and/or red gear. Roma with two more hip throws, sending Adonis into the corner in frustration. Ventura says Adonis would win the award for "Most Abs." Adonis lays into Roma with rights and sends him into the corner. Adonis with a slam and drops Roma throat-first across the top rope. Whip and Adonis with an elbow. Adonis shrugs off a flurry of strikes and finishes Roma with the DDT at 2:50.

Back in the studio, Adonis says the WWF is in high demand for high caliber performers and he wants to be Mr. Everything. You do that with class and talent. He's all about wrestling and that's business. Vince says Adonis appears to combine business with pleasure. "I'm getting off." "You're getting off the set in a second." Hart isn't embarrassed to be seen walking along with Adrian, and promises he'll be the WWF Heavyweight Champion. We come back from commercial, and Adonis is off to the side of the studio getting his makeup, hair and nails touched up. He gets this treatment every day and take the crew with him on the road. "I don't want to look cheap!" Adonis tells Vince he makes the sunshine brighter than Doris Day ("Awwwwwe!"). Vince suggests maybe Adonis spend some time in the gym on his physique. The entourage insists that Adrian and Jimmy treat them well, including picking up the tab wherever they go ("yeah, picking it up and putting it back down."). The beauty treatment continues as me move along to the next guests.

The Bees actually come out wearing polos with yellow and black stripes. WHAT GEEKS. Brunzell is still sporting the cast on his left hand. He says it should be off in about two weeks.

From the March 23rd episode of All-American Wrestling, Joined in Progress with Thornton and Blair trading forearms. Blair gets caught in the corner and hooked around the throat by Barry O. Whip to the ropes and Barry with a knee to the back. Barry O with a shoulder breaker for two. Blair sweeps the legs and tags in Brunzell, hanging around a bit to give him a wish bone. Thornton back in to feel the wrath of Brunzell, who is without the cast here. Blair with a whip and powerslam for two. Whip and hooking clothesline, followed by an elbow drop for two. Brunzell with his signature dropkick for three at 1:59 (shown).

Back in the studio, we see that Adonis is getting his toenails painted, much to the disgust of McMahon. The Bees are in the hunt for the tag team gold but seem to run into trouble when there's teams that have a manager with them. That's literally every tag team in the company, at least on the heel side. What a terrible segment, these guys are a charisma vacuum.

Steele is without his manager/handler Capt. Lou Albano, so I expect this segment to be kept short. McMahon gives the excuse that Albano came up with the idea to send Steele out there alone, to get him more comfortable in society. He takes a look at Adonis and makes funny faces. Even uncivilized animals can't stand gender-bending, even doing the little hand gesture that feels like it belongs as a visual gag on Three's Company. Adonis snarks back at Steele, who is practically a mute still. McMahon mentions his team with the JYD being undefeated, having worked maybe 1 or 2 matches together. "Junkyard Dog… dance… strong." He wanders off the set to get a closer look at Adonis, and we get a standoff with Adonis brandishing some kind of cream as his weapon of choice.

I expect this to be pretty short too, since Bruno is hardly a man of many words. He shakes his head looking at Adonis as he approaches the set. McMahon says Bruno is known as a no-nonsense guy in and outside the ring. Bruno doesn't take anything away from Adonis as his in-ring ability goes, but outside the ring, he doesn't want to be within 3 miles of him. Vince asks what Adonis' chances at longevity are. Bruno says maybe he should start with some fruits and vegetables.

- We get some old stock footage of Bruno and David Sammartino against Mr. X and Steve Lombardi. The fact Vince McMahon identifies David by name is a shock, considering he left on bad terms towards the end of 1985.

Back in the studio, Bruno says he trains 3-4 hours a day every day to be the best he can be at his profession. As he got older, he had to train harder to maintain what he could achieve as a younger man. He's dropped from 270 to 245 pounds to maintain his speed and stamina. He's shown some loudmouths that he can still go in the ring. He thinks it's a myth you need to be 280-290 pounds to be a successful pro wrestler. Jesus, Bruno is SHOOTING in 1986!

WE WANT FUJI VICE! WE WANT FUJI VICE! Vince says this may be something we may or may not be looking forward to, after having to sit through stuff like Fuji General. Muraco calls Adrian Adonis spectacular, and questions how Alfred can't appreciate his style. Muraco says they were pressed for time on everything involved with Fuji Vice, but we have the final product!

- FUJI VICE begins with some carefree youngsters playing volleyball, only to discover a dead body in the sand. We get out poor-man's knockoff of the Miami Vice intro, starring Muraco (as Crockett) and Fuji (as Tubbs). A woman named Angelica comes along and identifies the body as her brother, Juan. The coke dealer they're looking for is named the Seahawk. The detective doesn't seem convinced the woman and the dead man are relatives. Muraco promises to find the man responsible for the murder as we get a montage of them trying to dig up any dirt they can find. All signs point them to the docks, attempting to go undercover with $250,000 in cash to get into the business, and wouldn't you know it, the Seahawk was Angelica, the woman from earlier after all. She laughs at their stupidity to personally deliver her quarter-a-million dollars and says that her and Juan were no more related than Muraco and Fuji. Luck is on the side of Fuji and Muraco, as the detective from earlier makes the save for them and arrests the Seahawk and her goons. Muraco and Fuji escape their entanglement and try to take all the credit for the arrests. I could've sworn I've seen an extended cut where Muraco and Fuji meet Angelica at the bar, and she pleads her case for them to believe her innocence. I want to say it was on the "Explosive TNT Show" tape released by Coliseum Video, but I'm not 100% sure.

Back in the studio, McMahon says they've exceeded the previous Fuji pieces, calling it the worst one of them all. Muraco says McMahon cannot identify talent and insists there's talk of Mr. Fuji being nominated for Best Supporting Actor.

Vince McMahon wraps up the show, standing by with the made-over Adrian Adonis, rocking a perm, robe, and feather boas. George Steele rushes the set and tackle Adonis and we get the most unusual looking pull-apart brawl I've seen in the history of TNT.

Next Week on TNT: Hillbilly Jim, Bobby "The Brain" Heenan, The Funk Brothers, and Corporal Kirchner.

Final Thoughts: Adrian Adonis and the Magnificent Muraco were the stars of the show, with the makeover running throughout the show and the world premiere of Fuji Vice. Bruno Sammartino was a great no-nonsense guest too, adding a bit of credibility among the circus. Once again, Blair and Brunzell are at the bottom of the list for guests, showing zero personality, and having nothing to say.