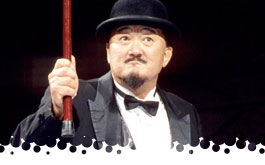 - Hosted by Vince McMahon, with co-host Lord Alfred Hayes. This week, Vince will be joined by a list of guests that includes Tito Santana, the Iron Sheik, Jimmy Hart, Mr. Fuji and The Magnificent Muraco. Sorry, we're not getting the 2nd edition of the WWF version of This is Your Life.

Alfred says one of them is magnificent and the other rotund. Jeez, I wonder who Alfred is calling rotund in this duo. Muraco and Fuji are still polite enough to shake his hands. Vince asks Fuji if he sleeps in that outfit, because he seems to wear that same outfit every appearance. We throw it to footage of Muraco in action against Rick Hunter, taped months ago from Championship Wrestling. Muraco says his is the finest Piledriver in professional wrestling. Vince asks why he does it different than anyone else. "Because I like to hear the bones crunch." Muraco even says the footage is a little old, and he's recovered from a rotator-cuff injury and gotten to below 10% bodyfat. Vince says Muraco lost it (the weight) and Fuji found it. Vince points out that Muraco hasn't won any Championships, going against Fuji's promises. Muraco says Hogan is throwing people like Steamboat and Orndorff at him to protect his title.

We come back from commercial to talk about Muraco's "film career." Vince says they've failed miserably at an attempt to become "legitimate actors." He calls them a disgrace to the profession and throws it to highlights from "Fuji General", "Fuji Bandito" and "Fuji Chan." Muraco delivering his lines in such a wooden tone while obviously reading his lines from off-screen is too good to not appreciate. I'd rather see the entire segments, as this seemed like a mash-up of things that doesn't allow us to really drink in. Vince calls them out on their failures and now they can't get any kind of work, whether it's acting, directing, or producing. Muraco says there's a network looking to give them a time slot, but can't go into detail, other than a man named Michael Mann is behind them 100%. Muraco says there's two actors looking to be replaced, and mentions you'll be looking at Crockett and Tubbs when September comes, and they'll be the stars of FUJI VICE. With the consult of the network, they'll give us a little taste of Fuji Vice. "Have I ever lied to you?" says Muraco, with McMahon looking exasperated at the camera.

Poor Tito has to follow the bombshell announcement of FUJI VICE? Poor bastard. Vince throws it to footage of Randy Savage defeating Santana for the Intercontinental Title from the Boston Garden. They show the last 2-3 minutes of a damn fine match, made even better when the fallout of a corrupt referee angle developed months later, and this fell into the continuity of that saga. Santana says he watches the footage at least 2-3 times a day, and it makes him sick when Savage claims he never pulled anything out of his trunks. Vince says Tito seems determined to reclaim the belt. Santana accidentally calls him "Gene". "Just don't call me Alfred." Santana cuts a short, soft-spoken promo to wrap up this segment. Tito is never on for too long, is he?

I feel like Jimmy Hart appears at last every other week, if not more frequently. He has two extraordinary teams in the Hart Foundation and the Funk Brothers. Hart says the TNT Band is the worst he's ever heard. Vince says this wasn't the same band from the night that he was allegedly ripped off at the Slammy Awards. Vince says he's so hyper, it's a wonder he hasn't had a nervous breakdown. We see highlights of Terry and Hoss Funk in action, pulled from an episode of All-Star Wrestling. McMahon asks Hart what kind of feeling it is to have the branding in his hands and to brand someone that is incapacitated. He doesn't know kung-fu or boxing, so it feels good. Hart says a little kid threw underwear at him, because the Junkyard Dog got the fans to do these disgusting acts of conduct. Hart says Alfred probably paid the kid to do it, too. Hart says he who laughs last laughs the hardest and promises to have the last laugh at the JYD.

We come back from commercial, with Jimmy Hart claiming to have a migraine listening to this TNT band. Vince asks the fans in attendance if they want to see the megaphone crammed down Jimmy Hart's mouth, and they respond with explosive applause. Ditto for "crammed up" him. Alfred says having the megaphone at ringside is unfair and should be banned. Hart says he can't instruct his wrestlers because of fans screaming at him, so he needs it to communicate with his guys. We throw it to footage of the Hart Foundation in action against George Wells and a token enhancement talent. Back in the studio, Vince says there's a rumor that Jimmy Hart will put on the tights on step into the ring as a wrestler as part of Six-Man Tag Team Matches. Rumors? WE JUST SAW IT ANNOUNCED THE PRIOR WEEKEND. Hart says midgets are dangerous, and if he threw a punch, where do you think he'd be hit (implying in the gonads? Vince replies "I don't think he would find anything." Hart says "the midget" is going to pay for it, blaming the Junkyard Dog for everything. Vince rolls his eyes as Hart promises to get even with everyone laughing at him, and says he'll pin the midget.

I guess the entire hour dedicated to Nikolai Volkoff last week was enough to give him this episode off. The opening rundown of the guests didn't mention Blassie, so where's Sheiky-Baby. Blassie says Iran is #1, and Hercules #2. NUMBER 2?! Blassie yells at a heckler that he's paid more for his bathroom than some have for their home. He spent $45,000 on his bathroom, so he can talk about his bathroom all he wants. He has one of those bidets to save on toilet tissue, sending Alfred into a laughing fit. Vince asks Blassie to relax and not get too worked up. We see highlights of Nikolai Volkoff and the Iron Sheik in action from All-Star Wrestling. Back in the studio, Blassie calls them the finest tag team in professional wrestling. He says both could be the Heavyweight Champion given the right opportunity. Vince goes back to talking about Blassie's bathroom and bidet. Vince asks if the audience knows what a bidet is. Blassie says they probably think a bidet is a drinking fountain.

- We come back from commercial to wrap up this week's episode. NEXT WEEK we'll be joined by "old camel breath himself" the Iron Sheik, as well as Hercules Hernandez, The Haiti Kid, "Leaping" Lanny Poffo, and Elizabeth and "Macho Man" Randy Savage.

Final Thoughts: This one was all over the place, with the biggest moment being the announcement of Muraco and Fuji's deal for "Fuji Vice" and promising a sneak preview in a future appearance on TNT. Fred Blassie's appearance was just a laugher with the discussion mostly on his bathroom, and then we've got Jimmy Hart's anxiety attacks talking about wrestling the Haiti Kid. I glossed over the recycled squash matches this week, and probably for the better.