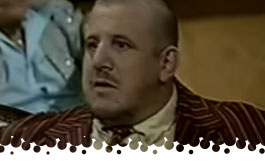 - Hosted by Vince McMahon, with co-host Lord Alfred Hayes. We're two days removed from WrestleMania 2 (what the world came to, at this point). If you think we're getting a lot of talking spots about what took place at that event, I've got six words for you: THIS IS YOUR LIFE, NIKOLAI VOLKOFF. Years before the Rock and Mick Foley made it a trope and EVERY SINGLE VERSION SINCE HAS BEEN A COLOSSAL TURD, Vince McMahon busted it out on his wacky talk show.

- OK, for those unfamiliar with the concept, "This is Your Life" was a well-received TV series that ran throughout the 1950's where celebrities would be brought on the show as surprised guests through the help of friends and family working behind the scenes to put everything together. Wouldn't you know, it Vince rips off the concept too, having Nikolai Volkoff seated among the dozens (AND DOZENS) of Titan employees and friends held their at gunpoint. You might be surprised that Nikolai is wearing his one and only suit.

- Mystery Guest #1 says the first time he met Nikolai Volkoff; he was stuck for an answer when someone said "Hello." "WOAH, Fred Blassie!" immediately comes out of the smiling mouth of the big, bad Russian brute. Volkoff says he was here to watch "Dating Game", but Blassie says that's OK, after this show, they can go on a date. Blassie makes up some nonsense story about discovering Volkoff in a gym, calling him an Olympic Gold Medalist! "What Olympics?" asks Vince. Blassie barks back; "It was the Olympics, what do you care?!". Vince asks how come Blassie hasn't been able to guide Volkoff to the WWF Championship before moving him along to the gallery.

- Mystery Guest #2 reminisces about swimming in the Volga and getting sick on the rides at Gorky Park. Volkoff is completely clueless (*rimshot*) and discovers it's his sister, Olga, all the way from their home of Ivangorod. Everyone is so proud of him. Ivangorod is very poor, as scarce as a heatwave in Siberia. Even when he was little, Nikolai was always telling jokes, and was a standout performer in his childhood play of "Peter and the Wolf", where he played the cat to (alleged) favorable reviews (including three curtain calls). Nikolai is BEAMING FROM EAR TO EAR. Some people want to name Ivangorod "Nikolaigorod." She has a framed photo of his baby picture, and yes, it's his current head on the body of a toddler. Olga turns heel, saying she wants to hit him over the head for never working hard, carving animals out of wood, and stealing the family savings for her ballet classes. He spent some of the money on the horrible outfit he's wearing right now! Now they want to hang her in the main square of Ivangorod.

- Clips of Nikolai Volkoff in action... against Swede Hanson. Yuck.

- "Macho Man" Randy Savage is standing by for pre-recorded thoughts on Volkoff. He says Volkoff is strong, REAL strong.

- Mystery Guest #3 shouts an incoherent fight song in what sounds like a bad Dracula impression, which Volkoff clearly recognizes as "Coach" (no, not John Tolos). It's the same actor they used on TNT for countless sketches, most of them unfunny. He's wearing a blue sweater with "CCCP" on it, and he's Volkoff's (alleged) High School wrestling coach. Uh-huh. Coach calls Volkoff an incredible Super-man. He recounts a story where Volkoff carried a broken cart on his back, while carrying the entire load of potatoes under both arms. Volkoff's head is so strong that he headbutt an opponent and three inches of a bump came out, then he headbutt the bump and the head went back to normal. Coach isn't just a Coach, but Volkoff's MATH TEACHER. Unfortunately for Nikolai, snowdrifts could do better mathematics than him. He thought the multiplication table was something you put tea dishes on. Instead of sending man to the moon to find something there, they should send something in Volkoff's head to find his brain. Olga is stewing as Coach blames Volkoff's failures for his own misfortune, costing him his job at the school. To him, Nikolai will always be 2 years old, because he can't count higher than that.

- More clips of the god awful match with Swede Hanson.

- Capt. Lou Albano (with George "The Animal" Steele) with their thoughts on Nikolai Volkoff. Volkoff was the man who walked away from George Steele, sending Steele into the tutelage of Captain Lou, so they have that to thank him for.

- Mystery Guest #4 screams "Bachelor Number 1, what is your sign?" Some doofus named Murray (an Accountant from Dayton, OH) comes out and says he's supposed to be a contestant on the Dating Game. Vince, the kind soul he is, hooks him up with Olga Volkoff. The wheels are falling off the cart.

- The REAL Mystery Guest #4 groans... or growls... or whatever. "MAGDA!" Out comes a young woman who leaps into Volkoff's arms as if they're old flames. Wouldn't you know it, she is Nikolai's first childhood sweetheart. She says she was the envy of everyone when he took her to a wrestling match. He's wonderful in the ring, but not in the bedroom. Love making to Nikolai is a headbutt and a body slam. No flowers, no candy, no romance. NOTHING. Nikolai looks like he's about to cry. Nikolai was 31 years old when he had his first kiss. He couldn't go on a date until he finished High School. He never paid for anything on their dates, always wearing that same stupid suit. Nikolai said the first time he saw her he was drunk laying on the bar, and she was looking up to him. WOAH! NIKOLAI IS SAVAGE!

- King Kong Bundy is our next cameo. He calls Nikolai a man among men that says whatever is on his mind, no matter what other people think.

- Mystery Guest #5 (Jesus, how long is this?) asks Nikolai if he remembers their secret password and handshake. This mystery man in black (oh God) says Volkoff was sent to the USA to be a secret agent. Coach quickly disputes the man claiming Nikolai had great mathematic skills. OK, that alone might save this segment. Vince congratulates Nikolai on keeping his cover for so long. Turns out Volkoff was awful at his work, and he was almost thrown in jail by the KGB. Volkoff's one assignment was to find where the President of the United States is located. After three years, he answered "Somewhere East of Rocky Mountains".

- "Mean" Gene Okerlund with his thoughts on Nikolai Volkoff. He recalls meeting Volkoff years ago when he was down in the dumps and asked him to pick up a fender for a 1974 Chevrolet. Not Gene's best joke.

- Mystery Guest #6 is so obviously the Iron Sheik that Nikolai lights up the second they pipe in the soundbite. He's seriously a kid on Christmas morning with this show. Sheik can't bother to put on a pair of pants for such a special occasion. Vince tries to cover Sheik up with his robe. Sheiky-Baby says he's "pride" of his partnership with Nikolai. He says Nikolai isn't smart or intelligent, but he made it from Moscow to the WWF, and they became the Tag Team Champions. Sheik removes his robe and headdress and starts flexing as the Sheik's segment is REALLY going off the rails. Vince asks about jealousy between the two and their background as amateurs, but Sheik shoots him down.

- We see Nikolai Volkoff and the Iron Sheik in action, a match featuring an appearance from Cpl. Kirchner waving old glory for cheap babyface reactions.

- Ricky Steamboat thinks of Nikolai Volkoff as a man strong enough to pick a man over his head and slam them to the canvas.

- Vince McMahon mentions the "vocal skills" of Nikolai Volkoff, especially his love of singing them Soviet Anthem. Blassie chimes in that Volkoff won a Slammy Award (though it wasn't for something positive). We throw it to an old episode of "TNT" with Volkoff giving us a musical number, and yes, he's wearing the disgusting red striped suit there, too. We throw it to footage of Nikolai accepting his Slammy Award for "Most Ignominious", an Award with only ONE nominee. Makes it hard for someone to lose in that case. Nikolai doesn't know what it means, but Vince defines it as degrading, humiliating, and despicable.

- Jimmy Hart and "Hoss" Funk share their thoughts on Mr. Volkoff. Hoss says Jimmy has a better voice, but they think he's Number One.

- Vince McMahon wraps things up for this edition of "This is Your Life." Magda has a change of heart and hops on Nikolai's lap, despite him being the world's most ignominious love maker. The rest of the guests (minus Olga, likely canoodling Murray the Accountant) join the stage as McMahon continues with his speech undeterred to wrap up the first (and only) edition of "This is Your Life" on TNT.

Final Thoughts: This just went on and on... and on.. and on. You know, the first couple of guests (or 10-minutes) was genuinely funny, especially when Nikolai's "Sister" starts shooting on him for being a jackass. When all you have is jokes about Nikolai being stupid and cheap and a bad singer, it's hard to stretch that into 45-minutes of content. There's a good reason when they would showcase this segment on home video releases it would be trimmed down to highlights, usually featuring Blassie and Olga. The rest is just beating a dead horse, and there's no way I'd suggest watching the entire episode. Give the first 10-minutes a look, enjoy Nikolai's reactions and move on to something else.