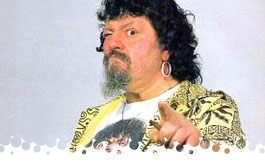 At least Jimmy has a new outfit for this episode, I don't want to accuse them of mass-taping for this show. He says the fans booing him must be JYD fans. He says Lord Alfred looks like he needs an undertaker, he needs some life in him. Hart reminds us of the Dog removing his pants over and over on National TV. He's got a big surprise for the Dog and Santana at WrestleMania 2.

- Highlights of JYD vs. Terry Funk from an episode of Saturday Night's Main Event, including Hart having his pants removed, showing off his "cute little red undies", and being branded. Then we cut to footage of the Slammy Awards where Hart is again embarrassed. More recycled footage, where Hoss (then still known as Dory) Funk makes his debut, helping brother Terry and Jimmy Hart in assaulting the Dog on Championship Wrestling.

Back in the studio, Jimmy Hart is happy to see the last piece of footage, calling Hoss his ace in the hole. He says the JYD called around for everyone to be his partner, but everyone turned him down because no one wants to face the Funks. He called Tito Santana collect and he's dumb enough to agree. There are four things you don't do: You don't spit in the wind, tug on Superman's cape, pull the mask off the Lone Ranger, and you don't mess around with Jimmy Hart.

I forgot he's still managing George "The Animal" Steele. He does another goofy dance, pulling his pants down to reveal his gut. He's wearing flip flops instead of sneakers today. I have a feeling we're getting a ton of recycled footage this week. Albano doesn't respect a man like Savage that abuses a woman like Elizabeth.

- Highlights from the January episode of Saturday Night's Main Event where the Animal was first smitten with Elizabeth prior to a match with the Macho Man. Cut to an episode of Championship wrestling where the Animal gives Elizabeth flowers, causing Savage to snap, and then an episode of TNT where a package included flowers dressed with turnbuckle stuffing. Finally, we see Savage attack Steele as he delivers another bouquet, only for Steele to fight back and send Savage running.

Back in the studio, Albano says Steele isn't interested in the Intercontinental Title, he just wants to get his hands on Savage for the way he treats women. Steele may be misunderstood, but he's not a moron.

Blassie has protégé's all over the card, with Hercules Hernandez in action in Los Angeles against Ricky Steamboat, Nikolai Volkoff against Corporal Kirchner, and the Iron Sheik in the Battle Royal, both taking place in Chicago. Blassie grabs some of the LJN figures and tosses them around until only the Iron Sheik is still standing in the ring. Wrong WrestleMania Battle Royal, Blassie! He calls William Perry a "fat slob" and Mr. T a "house ape." JESUS CHRIST. McMahon tries to apologize but Blassie says it again, LOUDER, in case we didn't hear him the first time.

- We get a package of the Battle Royal participants answering questions that was featured on an episode of Championship Wrestling.

Back in the studio, McMahon reminds Blassie that he once managed Big John Studd and if he has any interest in his success. Blassie tells McMahon to stick to announcing, because all that matters to him is the Iron Sheik. Blassie laughs off the idea that the Killer Bees or The Refrigerator would win.

- Exclusive training footage of Mr. T preparing for his Boxing Match with Roddy Piper. He's working out with Smokin' Joe Frazier to obviously dubbed music. He works the heavy bag, saying he pity's Piper. Again, like Piper, T's form in training isn't bad, but what will that translate to in a worked environment? T moves on to the speedbag and promises that Piper won't have a chance with him. He tells Piper not to chicken out and to meet him on April 7th.

- Celebrities include Ray Charles to sing America, the Beautiful, Susan St. James, Elvira, and Kathy Lee Crosby as guest announcers, G. Gordon Liddy, Cab Calloway and Darryl Dawkins as guest judges, HERB, Clare Peller and Ricky Schroeder as guest timekeepers, Dick Butkus and Robert Conrad as guest referees, Joan Rivers and Tommy Lasorda will be guest ring announcers, and Ozzy Osbourne will be in the corner for the British Bulldogs. Are we forgetting anyone?

WrestleMania 2. Chicago. Valentine and Beefcake vs. The British Bulldogs. Tag Titles. 2 Referees. I can't shill this match any more than I have in the last few weeks on TNT. Valiant says Ozzy Osbourne must be out of work to waste time with the Bulldogs. He's never seen Ozzy sing, so he's never missed him.

- Highlights of the British Bulldogs defeating Valentine and Beefcake in a Non-Title Match on Championship Wrestling... and that's all?!

Back in the studio, Valiant says both referees will count 1-2-3 when Valentine and Beefcake walk away victorious and retain the Tag Team Championship.

- "Mean" Gene Okerlund is on assignment in "Hulk Hogan's private gym", accompanied by Hillbilly Jim and Dr. Ponovich (sporting a Hulkamania shirt). We see the highlights of Bundy's attack on Saturday Night's Main Event. Okerlund asks the good doctor on Hogan's physical condition. He advised Hogan to not participate, worried about a possible herniated disc in his back that could result in permanent injury. Hogan says he's been living with pain for 5 ½ weeks and he decided then that he had a commitment to the Hulkamaniacs and defend the WWF Championship. Hogan wraps a100 pound dumbbell around his neck and does chin-ups to show his dedication to stepping in the cage and defeating King Kong Bundy. There will be a winner and a loser, and no way out. He fears no pain and no man and is looking forward to seeing Bundy inside that cage.

- Next Week: WrestleMania 2 will be in the books.

Final Thoughts: Order WrestleMania 2 on Pay-Per-View or attend a screening at select closed-circuit locations. This was 45 minutes of a WrestleMania 2 commercial, using a lot of highlight packages to get fans interest peaked for the upcoming Pay-Per-View.