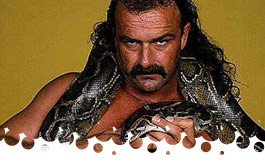 - Hosted by Vince McMahon, with co-host Lord Alfred Hayes. This week's guests include Terry and "Hoss" Funk, Jimmy Hart, Tito Santana, Smokin' Joe Frazier, Jake "The Snake" Roberts, Big John Studd, and Ricky "The Dragon" Steamboat. Quite the lineup this week. McMahon warns anyone afraid of reptiles might want to leave when Roberts arrives, because he has a boa constrictor with him.

Terry wants to know what happened to guys like John Wayne and Audie Murphy, then says his brother Hoss is all of them rolled into one.

Recycled from the March 1st episode of All-Star Wrestling, with Gorilla Monsoon and Jesse Ventura calling the action. Santana and Shaw fight over a waist-lock but end up in the ropes. Ventura wisecracks that Santana looks better without the gold around his waist. Santana hooks the arm, but Shaw makes it to the ropes. JYD in with a headbutt across the arm. Shaw lays into the Dog with forearms and nails him coming off the ropes with an elbow. Marconi tags in and throws some pathetic blows. Dog quickly knocks him down with a headbutt. Santana sends him to the ropes and lands a fist to the midsection. Whip and Santana with a back body-drop. Figure-Four finishes at 2:24. Not much of a squash, but at least we're seeing Tito and JYD as a team.

- Terry, Hoss, and Jimmy aren't impressed by their WrestleMania 2 opponents. Funk tells Ronald Reagan to not have a speech to give, or Sylvester Stallone to have a film to premiere, because the only thing that should take center place on April 7th is WrestleMania 2. Jesus, is Terry getting paid a percentage of the gate? He promises to rip the ears off the jackass known as the JYD. He says Tito is the Burrito King and he can eat all the burritos he wants. That wasn't offensive. Hoss finally chimes in that the JYD builds his reputation on beating on 120-pound people, and he's quickly cut off. How rude!

- Vince McMahon lets us know that the Los Angeles portion of WrestleMania 2 will feature Tito Santana and the JYD vs. Terry and Hoss Funk, Uncle Elmer vs. Adrian Adonis, Ricky "The Dragon" Steamboat vs. Hercules Hernandez, and in the Main Event, Hulk Hogan vs. King Kong Bundy inside a Steel Cage for the WWF Championship. I'm as shocked as anyone to know which matches were taking place where (as far as undercard) this far in advance.

McMahon asks Santana if he's overheard the comments made by the Funks, and Santana deadass responds that he was running late this morning and only got here a little while ago. DUDE, IT WAS FIVE MINUTES. Santana says he enjoys teaming with the JYD because he's always there with you. He credits Terry and Hoss Funk for being two of the toughest men in wrestling.

- Highlights of the Junkyard Dog vs. Terry Funk from the November 9th, 1985 card held at the Boston Garden.

Back in the studio, Santana says they have to worry about not only Terry and Hoss, but Jimmy Hart and his "microphone." He wishes the tables were turned and they could use it for once. McMahon asks if he's on a "downer" since losing the Intercontinental Title. It's got his "Mexican blood boiling" and he didn't lose the belt, it was stolen from him. He guarantees it'll be Savage's worst nightmare because he isn't going to "let down." My God, Tito is a terrible promo here.

- Vince McMahon runs down the New York card for WrestleMania 2: Jake "The Snake" Roberts vs. George Wells, The Magnificent Muraco vs. "Mr. Wonderful" Paul Orndorff, "Macho Man" Randy Savage vs. George "The Animal" Steele for the Intercontinental Championship, and "a most interesting" Boxing Match between Mr. T and "Rowdy" Roddy Piper.

Frazier comes out on the stage with something wrapped up and tucked under his arm. He doesn't waste time revealing that it's a rubber chicken dressed up like Roddy Piper. Check out the legs on him! McMahon peeks under the kilt, because why not. We throw it to footage of a recent press conference featuring Roddy Piper and his trainer, Lou Duva. Piper makes fun of Mr. T's boxing credentials, and tells Joe Frazier, if he thinks he can pull something, he's gonna feel like he's back in Manilla. Piper has a picture of Mr. T, looking all beaten and bruised. Piper now calls it the Great White Hope vs. The Great Big Dope. He makes fun of Mr. T's hair again. All he's said for 5 years is "I pity the fool", but maybe that has to do with his lack of education. Back in the studio, Frazier says they're two losers and wonders why Piper wears a dress. He promises that Mr. T will be in shape and they'll rip Piper apart, piece by piece. It seems like Mr. Frazier is a little… out there.

McMahon introduces Roberts as a "peculiar" individual. McMahon asks how he should address Roberts, the answer being "anything but friend." He doesn't seem impressed by Joe Frazier playing with toys. He sees them scream and holler. He doesn't scream because if a man has enough power, he can speak softly, and everyone will listen.

Joined in Progress, from the yet-to-air March 22nd episode of All-Star Wrestling. Roberts scoops him up and plants him with a slam. He casually hits a leg drop and grabs a hammerlock. Monsoon screams foul at Roberts' blatantly pulling the hair. GEEK fires off a series of right hands, but Roberts cuts it off with a short-arm clothesline. DDT finishes at 1:32. Ventura calls the move a "reverse bulldog." Post-match, Roberts undoes the ominous green bag and unleashes a large snake, causing some fans to scream in terror. He embarrasses his opponent, by laying the snake across his unconscious body.

Back in the studio, McMahon is amongst the audience for some Q&A. He asks Roberts if he has the same snake in the bag. The one we saw on the tape was named Damian, but the one he brought today was Lucifer. Ever since the beginning of time, the snake has been around. Ask Eve, she trusted one. He says it's all about intimidation. If they're thinking about the snake, they aren't focused entirely on him. "Joe" asks if Roberts can get a date? "Why don't you ask my 1st ex-wife that question." People fear snakes because they don't understand them.

McMahon and Alfred are still worked up about what we just saw with the snake. McMahon talks about Steamboat facing Hercules at WrestleMania 2, and notes Hercules is still undefeated. REALLY? I might have to look into that. Steamboat says to not discredit his own strength, but he also has speed on his side.

Back in the studio, McMahon says Steamboat uses a lot of risk with some maneuvers he performs. Steamboat says you risk everything by just stepping in the ring. He shuts down McMahon's questioning of things and notes the injuries he's sustained missing some of his highflying moves. He says Randy Savage climbs the ropes a lot, too. Back in the day, Lord Alfred climbed the bottom rope and fell off.

- One last update on the card for WrestleMania 2. The lineup for Chicago will feature Nikolai Volkoff vs. Corporal Kirchner in a Flag Match, The Fabulous Moolah vs. Velvet McIntyre for the Ladies Championship, Greg Valentine and Brutus Beefcake vs. The British Bulldogs for the Tag Team Championship (and with two referees), and a 20-Man Invitational Battle Royal featuring the likes of William "The Refrigerator" Perry, Ed "Too Tall" Jones, The Iron Sheik, Russ Francis, Ted Arcidi, Harvey Martin, Bruno Sammartino, Bill Fralic, Brett Hart and Jim Neidhart, Jimbo Covert, Brian Blair and Jim Brunzell, Hillbilly Jim, King Tonga, Danny Spivey, Tony Atlas, Dino Bravo (replaced by Pedro Morales), Andre the Giant, and our next guest...

We're cramming as much as we can into this episode. Studd will be part of the 20-Man Battle Royal, as we've just found out. Alfred sells the handshake from Studd. He calls out William Perry immediately. He spent an hour at the gym leaning against a wall, holding it up. We see footage of Russ Francis skydiving ("that should help him on his fall over the top rope!") and hanging out by the beach. McMahon notes Francis has donned the wrestling tights before electing for a career in professional football. Studd isn't sweating Francis because there's no footage of him in wrestling tights. He says the match will come down to himself and Andre the Giant. He's not impressed by any of the football players and is only impressed by Andre because he's the only one besides himself who can claim to be a giant. When we come back from commercial, McMahon again runs down the participants, this time mentioning Pedro Morales instead of Bravo.

Final Thoughts: This was a packed episode of TNT, hyping the entire card for WrestleMania 2, and giving us a clear idea of what matches would take place in which locations on April 7th. It's funny that on this episode, we find out about Roberts' match and who Moolah was defending against, when the syndicated shows were kept in the dark on the challenger and Roberts' match was the last announced of the 12 matches scheduled. Joe Frazier's appearance was the weakest of the bunch, clearly having little idea what he was supposed to promote. Overall, another solid edition of TNT as we get closer to WrestleMania 2.