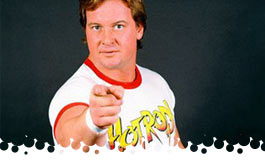 - Hosted by Vince McMahon, with co-host Lord Alfred Hayes. This week's guests include King Kong Bundy, Bobby "The Brain" Heenan, Jimmy Hart, and Roddy Piper. OK, that's a solid lineup. I'm skipping over the February 28th episode due to the WWE Network version cutting out the one segment I wanted to cover, an exclusive Boxing Match with "Boxing/Battling" Bob Orton against some enhancement geek.

Heenan asks what has 17 teeth and an IQ of 11: The first four rows of the TNT audience. McMahon asks to see Bundy's socks, but unfortunately for Vince, Bundy doesn't warm them, they make him hot. Hayes chimes in that Bundy has "cold feet." We throw it to footage from "Phoenix, AZ" where King Kong Bundy brutally assaulted Hulk Hogan. I wonder why McMahon didn't say "Saturday Night's Main Event." Back to the studio, we see Heenan having fun with the LJN figures, using Bundy to splash Hogan repeatedly. Vince asks Bundy if he's ever been inside a steel cage. He says yes, but has Hogan been inside a cage with someone like himself? Bundy's at 100%, Heenan said he would manage the WWF Champion in 1986, and this will be the man to do it.

We return from commercial and throw it to footage of Hogan being released from the hospital. Wow, McMahon said the "h" word? I wonder when he made "medical facility" the go-to term. Hogan has a confirmed "cerebral brain concussion". Bundy asks how much brain damage he could have, he's already 90% brain-dead now. Heenan says the physician is a guy he wouldn't trust to treat a cat. We cut to a promo from hulk Hogan, sporting the taped ribs. He felt the pain, man, and all that did was drive him on to train harder. He can live with the pain, but he's got the chairman of the board, Mr. T, by his side. When your body says no, your spirit wills you on. When you got one good hand left, you crawl to that ring, climb in that cage, and if Bundy wants that gold, then try to beat him down in the center of the ring. With all the Hulkamaniacs on his side, there's no way someone so negative can destroy the spirit of Hulk Hogan. He's coming to Los Angeles to reclaim his pride, and that steel cage will leave a lot of nasty scars on King Kong Bundy. Back in the studio, Heenan passes a letter to McMahon, addressed to Hulk Hogan. Inside is a "get well" card that recommend Hogan find friends to be there for when he's "Bundy-ized."

What an unexpected surprise! "Grab them cakes!" McMahon congratulates the JYD for winning a Slammy Award (for best single performance). If you're wondering why that wasn't covered, I don't have a copy of it. JYD and Vickie Sue were rocking last Saturday Night. JYD says Jimmy Hart was mouthing off as always, so he did what he had to do and spanked him. We throw it to footage of the Slammy Awards and JYD accepting the award. The victory speech was all of 10-seconds. Jimmy Hart isn't happy about the results, claiming that the JYD paid off the band to play his song poorly. JYD interrupts his whining, asking where "Terry" is (Funk). Hart slaps the Dog, but that has no effect on him. JYD drags Hart onto the stage, tears off his pants, and whips him across the butt with said pants. Back in the studio, the JYD isn't afraid of Jimmy Hart's boys, because he has friends in high places. McMahon warns the Dog to look over his shoulder at all times, but the Dog isn't afraid. McMahon asks why Jimmy Hart always has on "cute little red undies." JYD jokingly says maybe he comes from a place with flashing red lights and promises to help close it down.

Maybe we'll get a follow-up on the red underpants question. He perfumes the chair the Dog recently sat on. He's embarrassed and says the Dog is sick for always wanting to tear his pants off. Hart claims he was minding his own business, but he was ripped off. He says he should've won the award, because he wrote and performed his song himself, while the Dog paid people to work on his. We see highlights of the JYD vs. Adrian Adonis from Saturday Night's Main Event. Back in the studio, Hart promises the Hart Foundation will get revenge on the JYD (that means his entire stable, not just Brett and Neidhart). We're informed of Uncle Elmer vs. Adrian Adonis taking place at WrestleMania 2. Hart takes offense to the audience laughing at Adrian and yells at Lord Alfred to keep the JYD action figure away from him. He's got a big surprise for the Dog and may happen at WrestleMania 2. He says the Hart Foundation doesn't get mad; they get even.

McMahon calls Piper one of the most controversial athletes in the world today. I never noticed how small the TNT studio was until Piper decided to take an alternate route. The crowd greets him with a loud "Roddy" chant. UH-OH. He clears the LJN ring, leaving his own standing, to another applause. He saw the Junkyard Dog out here, and all he could see was him grab Jimmy Hart's cakes. McMahon congratulates Piper for winning the Slammy for "Best Personality in Land of a Thousand Dances." Piper says he's not proud because his competition was Uncle Elmer and a pig. McMahon throws it to footage from Saturday Night's Main Event and the Boxing Match between Bob Orton and Mr. T., where Piper viciously assaulted T. Back in the studio, and the crowd applauds Piper's performance. Piper makes fun of T's haircut, shaving it down the sides and perming the middle. The only people who wore more chains than Mr. T were his ancestors. He is all for Martin Luther King Day, but did the JYD and Mr. T have to put chains around their necks to commemorate the holiday? Back from commercial, and it's time to hype WrestleMania 2. Piper says he's the great white hope and Mr. T the great black dope. "T stands for Trash." We throw to footage of Championship Wrestling where Piper and Orton give the Haiti Kid a Mr. T inspired haircut (footage from an episode that hasn't aired yet!). Back in the studio, and the crowd LOVES Piper. "You don't like midgets either?" Piper says that's his idea of a good time. McMahon asks how low can Piper go than picking on a midget? "I'm here on this show." We abruptly cut away and… that's all.

- Next Week: Footage of William Perry on the subject of the 20-Man Battle Royal.

Final Thoughts: Lots of talk of the events that took place at Saturday Night's Main Event. Each guest brought something to the table and did a good job of hyping WrestleMania 2 (except maybe the Dog, but he wasn't offensive to watch, just very mellow). Piper being treated like a hero by the TNT audience is a head-scratcher, because he's presented as a nefarious jerk, but he's so entertaining, he's hard to boo at this point, especially when Mr. T is hard to cheer for in the promos we've seen. If you want to skip watching the entire episode of SNME, this episode of TNT has you covered and does a great job of hooking the audience with highlights and promos.