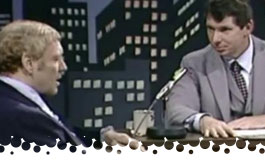 - Fred Blassie, Nikolai Volkoff, and the Iron Sheik (carrying a large rug) are here to open the show on a high note (well, 2 of the 3 more likely). At this point, I can't tell if this is the original music or lame stock music. Either way, it's terrible. Blassie doesn't care for the décor and says the carpet that belongs to the Iron Sheik costs more than the entire set. Everyone sits on the carpet, a PERSIAN carper if you're willing trust McMahon. Volkoff is not only wearing his one suit, but a large coat as well. Blassie runs down Lou Albano and Cyndi Lauper for being unintelligible goofs and says his men will defeat Rotundo and Windham for the Tag Team Titles. Sheik babbles nonsense, and calls Volkoff "The Russia Man."

From the NOVEMBER 24th, 1984 EPISODE OF ALL-STAR WRESTLING. Seriously, who's in charge of putting this show together?! Either one of those jobbers could potentially take the fall as I try and get my mind back on track. Seriously, this is almost 4 months old (counting from the taping date). The crowd drowns Volkoff's singing out with a chant of "Russia Sucks" and pelts him with trash. Oh, and there's a HILLBILLY in the front row. This is some awful commentary (Jack Reynolds and Angelo Mosca?). McGraw and Sheik start. Sheik with a fireman's carry, but McGraw counters with a head-scissors. Whip and McGraw surprises Volkoff on the apron with a dropkick. Jones in, thumbing the eye of the Sheik to crowd approval. HYPOCRITES. Jones unwisely sends the Sheik into his own corner with an atomic drop. Volkoff with a series of strikes on Jones. McGraw tries for a takedown, but that backfires. Sheik tosses him out of the ring and yells at the guys at the commentary table. Back inside, Sheik with the back suplex and he finishes with the Camel Clutch at 2:57. Post-match, Mosca ditches the table to smack Sheik with his shoe a few times. WHAT'S THE POINT OF SHOWING THIS WHEN YOU'RE HYPING SHEIK/VOLKOFF vs. WINDHAM/ROTUNDO?!

- Back in the studio, McMahon says he wouldn't be surprised if Volkoff and the Sheik don't walk away with the Tag Team Titles. Volkoff says Rotundo and Windham didn't deserve the titles and they stole them from Murdoch and Adonis. McMahon must REALLY love this trio, because they're still on the set after the commercial break. Blassie demands a beverage, preferably Iranian Tea or Russian Vodka. He helps himself to an apple and is disgusted by how hard they are. Volkoff grabs apples to show him how to make Russian apple juice and crushes some apples into Blassie's empty glass. "They're not very juicy, though." Sheik says Americans drink Coca-Cola or Pepsi-Cola, but their people drink REAL stuff like Apple or Pear Juice. PEAR JUICE? Volkoff says he couldn't eat anything when he came to America and only drank milk because there was nothing fresh and healthy for him.

- Joining Vince McMahon in the studio is the FIRST-EVER FEMALE REFEREE in the WWF, Rita Marie, or as Vince says, "a most unusual lady." She's as dolled up as she can be. What could possess her to enter the world of wrestling? She says she's living the dream of her dead brother. He wanted to be a wrestler, but she's happy to be a referee. Must... resist... Charlotte Flair reference. Whoops, too late. McMahon is perplexed by her decision to be a referee in a ring full of GIANTS. After all, she can't weight more than 120 pounds. We show highlights of a match refereed by Marie at Madison Square Garden between Spot and Blackjack Mulligan. Spoilers: The match stunk, but that's hardly her fault. We get the first few minutes until we thankfully return to the studio. More into her personal life, following her brothers dreams, like truck driving and sky-diving. Vince gives her a creepy looking, wishing for her safety in the ring.

Before we move on, Rita Marie's career in the WWF didn't last very long, maybe a year at most, working the occasional prelim matches. She would come back to haunt Vince McMahon a few years later, when allegations of sexual assault came up during the peak period where the WWF was under fire for steroid distribution and abuse. To the best of my knowledge, I don't think the lawsuit went anywhere, unless they settled quietly. Based on the information available in the Wrestling Observer Newsletters at the time, there's a good chance something happened, but there's also holes in the story of what took place.

- Dr. D David Schultz joins us next, snubbing Alfred Hayes' offers for a handshake. McMahon calls him the most arrogant person he's ever met in the World Wrestling Federation. He doesn't care what anyone thinks of him, all that matters is he's a winner. We see highlights from the Paul Vachon Wedding where he smashed cake into the bride's face. McMahon sells it like the most heinous act imaginable. Somehow, Schultz is more arrogant outside the ring than he is inside. McMahon talks about Schultz SLAPPING THE SKIN OFF THE FACE OF JOHN STOSSEL. Holy crap, they mentioned this on TV?! Schultz said he must've been a boy, all he did was slap him with an open hand.

Oh my God, NOVEMBER 10th episode of All-Star Wrestling. Schultz isn't even managed by Heenan anymore! Lombardi working as a babyface talent is just weird. Lockup into the ropes and Schultz quickly dumps Lombardi to the floor. Schultz follows, sending Lombardi into the barricade. Schultz rams the back of Lombardi into the post before tossing him back in the ring. Schultz with a back breaker then tosses Lombardi out of the ring, again. Jack Reynolds sells this like the crime of the century. Lombardi gets slammed onto the table. Back inside, and Schultz finishes with a flying elbow drop at 2:15. These days, Schultz would get over huge as a babyface for his reckless style.

- Vince McMahon must not have a lot of talking points, going back to the arrogance of Schultz. Dr. D asks him straight-up if Vince likes him or not, THEN WHIPS OUT A GUN. WHAT IN THE F*** AM I WATCHING?! We come back from commercial, and Dr. D is showing off his gun collection. So much wood-paneling. Sometimes I can't tell if they try passing these sets off as their homes, but at least a few times it was openly mentioned it was a studio set. They do a lot of ‘coon hunting where he comes from. That's RACOON, before anyone gets up in arms. Alfred has no interest in examining Dr. D's piece. Schultz yells at McMahon not to touch his collection unless he's offered. "Where'd you read 12 gauge from, some orderin' book?!". Schultz is indeed an interesting character and one of the few heels who I can't see as a babyface in his era. Schultz promises to show his gun isn't loaded, then accidentally shoots the roof. McMahon hollers, "You stupid idiot!", pissing Schultz off.

- We wrap up the segment with a man with more common sense than David Schultz, SALVATORE BELLOMO, accompanied by goofy "Italian" music. Why is he so dressed up for this? CAN YOU PLEASE SPEAK UP WHEN YOU TALK. How am I supposed to make fun of his promo if I can't hear it?! Bellomo has a NEW SHIP to show-off. If you'll remember, he made ships out of pieces of WWF Magazine. He says he's worked on this since 1983 (I don't think WWF had a publication in 1983) and all the pictures oddly seem to be from the last few months. He calls his ship "The Wilfred Wrestling Federation." We see highlights of Bellomo in action against Johnny Rodz from Madison Square Garden. It's from December 28th, 1984. When I was looking up dates, I saw they also worked MSG in 1982, but with Monsoon and Okerlund on commentary, it was definitely not THAT old. I wonder how much of a geek Vince McMahon thinks Bellomo is when he's showing off these ridiculous ships on his valuable TV time. Bellomo has the ship on a turntable and it plays "God Bless America." It's amazing, he comes across as a very nice and humble guy here, yet he's always getting booed at the major stops in the Northeast.

Final Thoughts: This is an automatic must-see considering they not only mention David Schultz slapping around John Stossel, but also Schultz PULLING A GUN ON VINCE MCMAHON. You don't watch the show for wrestling, otherwise you're a goof. The stuff with Fred Blassie, Sheik and Volkoff was great, and even having Rita Marie on here is a lost gem, I guess. A very watchable episode.