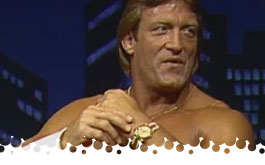 - Hosted by Vince McMahon, with co-host Lord Alfred Hayes. At this point, the "TNT" name is used almost exclusively, since it's clearly no longer on Tuesday nights, but old habits die hard. Much like the habit of recapping a show that generally doesn't tie too much into the weekly syndicated product. This week, Vince's guests will be "Mr. Wonderful" Paul Orndorff, Pedro Morales, Bobby "The Brain" Heenan and King Kong Bundy. This episode only runs 34-minutes on the WWE Network, so yay. Also, the episode is subtitled "Cooking Pedro Morales' meal fit for a King", and I suddenly think of the episode of the Simpsons "Treehouse of Horror" with the Alien cookbook and the title "covered in space dust", and somehow have convinced myself there's a missing comma to make that much more interesting than it's going to be. I'm rambling, so let us get to the show...

Orndorff comes out in long tights and no top, sporting the cast on his right wrist. Orndorff wants to know where his (LJN) doll is. McMahon asks if Orndorff works out wearing the cast (answer: of course, he does). McMahon accuses Orndorff of walking around away from the ring without the cast on and Orndorff admits he takes it off when he's home relaxing, but when he does anything physical like lifting weights, he has it on. That's quite the unique cast. Does it have built in hinges?

- Highlights of Paul Orndorff vs. Joe Mirto from the December 21st episode of All-Star Wrestling.

- Back in the studio, there's a mix of jeers from the crowd over seeing Orndorff use his cast as a weapon following the match when Mirto attacked from behind. McMahon welcomes a physician to the studio to get some information on Orndorff's injury. Doctor Brainiac insists it was a severe injury and Orndorff credits the injury dating back to an old football injury. We come back from commercial, and McMahon backs down from accusing Orndorff for using the cast simply as a measure of revenge. Orndorff says its an eye for an eye, and if you're coming at him, he will use it as a weapon.

- Highlights of Paul Orndorff and the JYD undressing a small child and encouraging him to flex and dance. I'll take "Things you can't do on television in 2020" for $500. Oh my God, Orndorff is STILL in the studio, as McMahon questions his dancing abilities and where he got them from. For a babyface, Orndorff came off like a huge jerk here.

At least here the villains getting booed is the right crowd response. When I was a kid, I always thought Bundy was the large leader of "The Baldies" in "The Wanderers." Why a kid watched a movie with many adult themes is not the topic of the day, but it was always one of those childhood rumors I believed in based on the fact both men were very large, white, and bald. Heenan chastises McMahon for bumbling his name and refuses to sit next to him. Bundy denies them ever performing any dirty tricks like WWF Magazine suggests they do. Heenan says he's a successful winner, and it doesn't matter whether he's the nicest person in the world. Heenan and Bundy share a laugh over the idea that McMahon would ever do anything shady. McMahon asks Bundy about his weight, and he confirms his weight is at 478 lbs. McMahon mentions Bundy challenging William "The Refrigerator" Perry. If he's the Fridge, then Bundy is a stand-up freezer. We come back from commercial, and Heenan insists no one wants to fight Bundy, especially Hulk Hogan, who finds excuses every time a contract comes his way.

- Highlights of King Kong Bundy in Handicap Action from the January 18th episode of Championship Wrestling.

- Back in the studio, Bundy gloats about being the only man to pin two people at the same time for a five-count. McMahon thinks Hulk Hogan wouldn't back down from Bundy's challenge for the World Heavyweight Title. Heenan says he's the people's Champion, but that's all he's got going for him. McMahon notes that Pedro Morales will join us when we return (Heenan: Oh, he made bail?).

I've been looking forward to this segment for the last half-hour. McMahon notes he's a former Mr. Everything, having won the World, Intercontinental, and Tag Team Titles, a feat no other man has accomplished. Alfred talks about being in a small airplane with Pedro Morales and having to fly through a storm, and to make a long story short (too late), Morales stole Alfred's booze. McMahon goes to the WWF Magazine for the 45th time this week to promote an article on Morales' tour of his homeland of Puerto Rico.

- Back in the studio, McMahon suggests Morales has the strongest left hand in professional wrestling. Morales says not a lot of guys can take it, especially if he pops them in the belly. We come back from commercial, and we're treated to a live band. I almost made a Desi Arnaz reference, forgetting he was Cuban, not Puerto Rican. The graphic only reads "Nuevo Amanecer". Is that the song, the band, or what? Pedro Morales and "Amelia" (whoever she is) are standing by with some Puerto Rican delicacies, including Arozz con Pollo (Rice with Chicken). TNT featured quite a bit of segments with food involved. McMahon introduces his foodie expert, Capt. Lou Albano, to sample the goods. McMahon requests Albano take it easy on the beans. Albano says the Islands are like his adoptive home. McMahon throws it to the band to play us another song, because listening to Albano chewing is probably not the best idea for good television. Albano says it's the best Puerto Rican food he's ever had. Hayes wasn't as complimentary, saying its food for common people. Albano shoves a banana in his mouth, because... um...

Final Thoughts: Mr. Wonderful was a terrible guest, but Bundy's segment almost seems to be planting the seeds for some future events, with the specific name-dropping of William Perry of the Chicago Bears, as well as a direct challenge to Hulk Hogan. As for the segment with Pedro Morales, it's that quirky TNT stuff that you'll either laugh at for being so absurd or shake your head and wonder why anyone watches it.... Why did Albano stuff a banana down Alfred's throat?