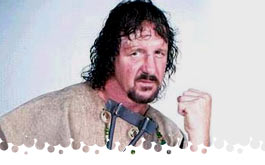 - Hosted by Vince McMahon, with co-host Lord Alfred Hayes. Tonight's guests include "Leaping" Lanny Poffo, Nikolai Volkoff, The Iron Sheik, "The Mouth of the South" Jimmy Hart, and "Terrible" Terry Funk. The WWE Network version of this episode only has a listed run-time of 30-minutes, so I'm assuming they cut a segment out, likely for copyright reasons. Or maybe it featured Mel Phillips in a prominent spot. If the broadcast date is accurate, that means Tuesday Night Titans was presented on the USA Network on a Friday.

- Lord Alfred Hayes has a New Year's Resolution to stay away from girls.

Vince must've LOVED having these two guys on the show, it seems like they're on every episode I've covered. He brings up how they've been working more singles lately, as well as occasional tag teamwork. Volkoff mumbles a response that sounds like he's throwing shade at Greg Valentine and Brutus Beefcake. Sheiky-Baby says that Fred Blassie has the confidence in them to let them do what they need to do, then removes his robe and starts flexing. Sheik says sooner or later, they're going to get the tag team BELTS back (his words, not mine). Volkoff has done something that Sheik hasn't, and that's launching a singing career. McMahon says Volkoff "attempts" to sing "Cara Mia", which is available on the Wrestling Album. Sheik says Volkoff sings better than Tom Jones, Frank Sinatra, Madonna, and Cyndi Lauper. That's quite the range of musical performers. McMahon polls the audience on their opinion of Volkoff's performance, and only one hand goes up. Gene Okerlund, on the other hand, gets a rousing ovation, as we take a break. We come back with Sheik and Volkoff handling their own LJN wrestling figures, both the standard figure and the thumb wrestlers. I'm not big on the LJN series, but I think I have the Volkoff thumb-figure in the vault.

Recycled from the December 14th, 1985 episode of Championship Wrestling. Rita Marie is the referee, for those who care about these sorts of tidbits. Volkoff sings the Soviet Anthem. That's unfortunate, I was hoping for Cara Mia. The crowd starts going wild, as Corporal Kirchner comes to ringside waving old glory. This allows the geek opponents to jump Sheik and Volkoff, sending them out of the ring for a breather to recompose themselves. Back inside, Sheik starts with Mr. Wrestling II. Lockup and Sheik shoves him into the ropes. Sheik no-sells a forearm to the midsection and refuses to go over for a snap mare. Gripley tags in and gets planted with a slam, followed by a belly-to-belly suplex. Camel Clutch finishes at 1:53. Volkoff did what he does best, nothing.

- Back in the studio, McMahon asks Volkoff and the Sheik about a sign we saw in the audience: "The Sheik has Camel breath." What does Camel breath smell like? Hayes says it's the most nauseating stench you can ever smell. He talks about a Camel that Sheik brought on the set of TNT some time ago.

Poffo immediately sucks up to the audience by flinging candy at them. I guess frisbees at close range was too hazardous to pull off in their tiny studio. McMahon notes Poffo has an "interesting" wrestling style. In my own personal experience, using the word "interesting" usually is my response to something I don't get or like. CORRECTION: It wasn't candy; it was rolled up POEMS. McMahon asks if Poffo has a sampling, and of course he does. McMahon teases Poffo has composed a poem about Lord Alfred Hayes, but first, TO THE VIDEO FOOTAGE...

Recycled from the... January 19th episode of All-American Wrestling? I guess time traveling was a hot subject in the mid 80's, thanks to Back to the Future. We're joined in progress (because a 3-minute squash match is too long to squeeze into such a tight window of entertainment). Poffo is riding Jacobs on the canvas with some amateur-style grappling. Poffo with a series of knees and a leg-lock. Gorilla Monsoon is calling the action solo and seems to enjoy Poffo schooling Jacobs on the canvas. Poffo with boots to the back of the head and a rolling senton. Jacobs gets a few forearms, but Poffo quickly cuts him off and pounds away in the corner. Poffo with a powerslam and a moonsault to finish at 2:23 (shown).

- Back in the studio, Poffo has a poem to honor Lord Alfred Hayes. You'd think there'd be a huge rib here, but it's actually a very nice, flattering poem that doesn't make Hayes look like a geek. In the back of McMahon's mind, he probably hated that it wasn't mean spirited and used this to avoid inviting Poffo back on the show.

We're "out of place" on the ranch, or what looks like a left-over piece of a set from Hee-Haw, if the set was built on a budget of $13.46. Terry Funk says the difference between "this animal" (a calf) and the JYD is that it's smarter than the JYD despite being an ignorant animal. Hayes talks about living in Amarillo, TX and the stench was unbearable. Funk asks, "how would you sell a deaf man a chicken?", then screams "hey, do you want to buy a chicken" as the punchline to the joke. Har har.

Recycled from the December 21st episode of Championship Wrestling. We're Joined in Progress (JIP), with Funk screaming at his fallen opponent that this is the Junkyard Dog. Funk takes him over with a suplex and deposits him to the concrete floor. Hey, Rita Marie is working another match on this episode! Back inside, Funk lays into Eberhart with a stiff chop and drops a leg across the chest. Funk with a hangman's neck breaker, but he pulls Eberhart off the canvas at two. Ventura says, "that looked like a kick-out to me." Whip and Funk hooks a sleeper for the victory at 1:59 (shown). Post-match, Funk brands his unconscious opponent… repeatedly.

- Back in the studio, Terry Funk has dozens of calves and cows, and has branded them countless times. You brand them so you know which ones belong to you. Funk says he's branding the entire WWF. Lord Alfred is in the crowd for some questions directed towards Funk and Hart. Hayes selects a kid wearing a Hulkster headband and holding a JYD LJN action figure. Hayes asks who would win, Hogan or Funk, and the kid picks the Hulk, of course. Funk says Hogan is so popular, not because he's the best or smartest, but because he's the Champion. Another kid doesn't want to be like Funk because he doesn't want the bad reputation. Are these QUESTIONS or comments? I feel like I was misinformed by Vince's original pitch. Alfred asks the next kid about a match between Funk and the JYD. The kid says Funk is a wimp and a jerk for not getting in the ring with him. Okay, that WAS a question, finally, as we take a commercial break.

We come back and talk about branding cattle and opponents. You can tell how much Vince enjoys a guest based on the length and depth of a segment. Vince says one of the most hilarious moments is when the branding iron was used on Jimmy Hart. We throw it to video footage of the JYD removing Jimmy Hart's pants and branding his underwear-covered buttocks. Jimmy doesn't appreciate the footage being shown again. Funk reminds everyone that Funk won the match, and that's all that mattered. Hart promises they'll have the last laugh on the Junkyard Dog.

- Next week's guests will be the Macho Man and Miss Elizabeth, Ivan Putski, The Junkyard Dog, and Big John Studd.

Final Thoughts: A harmless episode of TNT, though it lacked a memorable segment, either for good or bad reasons. Volkoff and Sheik don't have much steam as a team right now, so their ridiculous rambling only goes so far. Lanny Poffo was a pleasant guest but lacked an over-the-top personality. Funk was clearly the best guest, but it wasn't a home run, more like a bloop single that turned into an error allowing the baserunner to reach second. It didn't look like an edited episode, so I don't know what gives with the run-time.