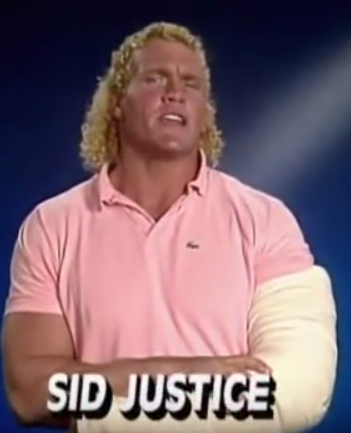 It's Thanksgivin' Thumpin', which means it's time for my annual random November episode of "WWF Superstars"! Or whatever else I feel like. This week we're in Fort Wayne, Indiana with our hosts Vince McMahon, "Macho Man" Randy Savage and "Rowdy" Roddy Piper. We have some BREAKING NEWS, concerning the upcoming Survivor Series: Sid Justice severed a biceps tendon in a recent match against Jake "The Snake" Roberts. Sid is standing by with some comments. To make up for his inactivity, Sid pleads with Jack Tunney to reinstate the Macho Man. Back in the arena (bluescreen), Piper holds up a sign reiterating the resintatement plea. But with so much going on in the World Wrestling Federation, let's get down to ringside for...

Intro vignette from Repo Man, who's out in the middle of a night to re-possess a car that is a day late on payments. He busts the window and hot-wires the thing. Y'know, had he come along about 10 years later, Repo Man might've been popular with the Grand Theft Auto crowd. 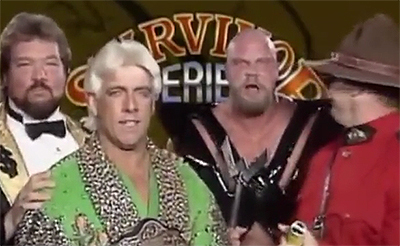 The commentators plug next week's show, which will feature the in-ring debut of Repo Man. Next week's "feature match" will be Irwin R. Schyster taking on Greg "The Hammer" Valentine. They both have some generic Fightin' Words for each other; "you're a tax cheat" countered with "hammer time".

Why'd You Watch This?
Aside from the Survivor Series hype, we got some solid storyline development, this episode. Neidhart's injury is the biggest, but we also get explanations for why Sid and Slick won't be around. I appreciate that they straight-up said: "he's injured" and didn't spin it into something else. That would've been....wait for it.... BOGUS! They even toss a bone to the house show circuit, by mentioning "Mr. Madness". A rather fast-moving show to get you psyched up for Survivor Series. Only real blemish was the left/right knee thing with Neidhart.