Due to a diminishing number of requests, it's another random episode of "WWF Superstars". This time, it's the premiere, first-ever, NUMBER ONE episode! It's the dawn of a new ara as the WWF officially launches a new format for their syndicated weekend show. Amidst some snazzy graphics (for 1986), our hosts, Vince McMahon and Jesse "The Body" Venura welcome us to the show and run down the card. Bruno Sammartino is also standing by as our special analyst. Also in action will be "The Federettes"-- random ring girls. But with so much going on in the World Wrestling Federation, let's get down to ringside for...

As you'll see as we go along, while these matches aren't exactly "Feature Matches" or SNME-worthy, it seems the WWF pulled out their higher-profile jobbers for this episode. Kirby had a pretty good run in the early 80's in St. Louis. While he looks like failry non-descript here, I swear I saw him in 1984 with his upper body covered in tattoos. The heels attack as soon as the good guys enter. Steamboat and Afi pair off an deliver in-synch hip-tosses and atomic drops to clear the ring. Kirby returns and get double-teamed. Gibbs makes the save and tries to atomic drop Steamer, but he flips out of it and full nelson's Gibbs for a flying chop from Avi. Afi and Steamboat trade palces and do the same thing, again, to Gibbs. Gibbs catches Afi with a reverse elbow, then tags in Kirby to deliver some kneelifts into the corner. They work-over Afi for a bit, even doing a double-team charging kick manuever. Gibbs tries a power-slam, but Afi small-packages him for 2. Afi decks Kirby, then somersaults over to Steamer for the hot tag. Steamer's all choppy-chopp, then backdrops Kirby and slams Gibbs. Another slam on Kirby and he leads over to the babyface corner. Kirby tries an atomic drop, but Steamer makes the blind tag to Afi on the lift. Steamer counters it into a belly-to-back suplex, then Afi flies off the top with a big splash to get the 3 count. Animated and decent opener that kept a good pace.

From the pages of the WWF Magazine, with Elizabeth on the cover. Former champ, "Superstar" Billy Graham is making his return to the WWF and is still "Bad to the Bone"! Set to the tune of George Thorogood, obviously. Superstar then cuts a promo, "out in the desert with the snakes, the lizards and tarantulas". He even has two tarantulas crawling over his face. I know, some people love their pet tarantulas, but those things have always creeped me out! Superstar throws out a warning to Big John Studd. I think Superstar returned for one match around this time, then wasn't seen or mentioned until after WrestleMania III.

It's a little odd to see Koko flapping his arms without Frankie. I'm thinking this is also Koko's syndicated debut, since McMahon gives a mini scouting report on him. Danny Davis is our referee, which will prove somewhat important. Koko shakes his booty and dodges a charge from Jim "The Anvil" Neidhart, then delivers a hip-toss. Tag to Roma who works the arm, then gets whipped to the ropes and blasted with a kneelift. Bret "Hitman" Hart tags in as the Harts do their double-team "Decapitation" move on Roma. Back-breaker and second-rope elbow from Hitman. Inset proom runs from Koko and his boom-box, while the Harts work over Roma. Before the promo ends, Roma falls victim to the Hart Attack and Hitman covers for 3. McMahon complains about how this "the worst case of officiating I've seen in a long time". Really wasn't that bad, as the Harts doubel-teaming was all within the 5-count limit. But you can see that they're starting to plant the seeds for Davis' heel turn. The Harts try to beat-down Koko, but he turns the tables and drop-kicks them away to clear the ring.

They hype up the next MSG show, which will feature Bobby "The Brain" Heenan, Big John Studd & King Kong Bundy taking on Super Machine, Big Machine and their newest member... Hulk Machine. Hulkster comes in and does his usual promo, but saying he flew in from Tokyo. The Hulkster stuff is kinda' funnty, but Super Machine cuts his lines in a VERY awful "Japanese" accent, calling everyone "san" and freaking out on words like "Honda". I liked them better when they spoke in their normal voices and insisted: "no, you don't know who we are". Talking in this insulting (almost racist) "Japanese" accent is pretty damn stupid. 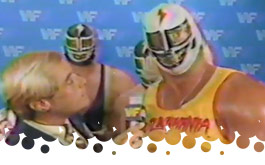 If you're watching this on YouTube, you'll probably see the awesome Crazy Eddie Back-to-School Blowout Blitz commercial, at this point!

Back from commercial, we get a promo from The Honky Tonk Man, who threatens "Mr. Wonderful" Paul Orndorff. I'd say Honky's babyface promos are identical to his heel promos, save for the presence of Jimmy Hart and the guitar.

Shaw tries to apply a side headlock, but gets shoved off for two shoulderblocks. Jim hip-tosses him, then both guys tag off to their partners. Duke whips Luke to the corner, but eats boot on the charge. Duke lands a double axe-handle and they try to isolate Luke in their corner. Luke rolls away and brings in Jim, who hits Duke with a boot and headbutt. Double-team elbow from the Hillbillies. Duke is whipped to the ropes for a Hillbilly Hammer from Luke, then Jim comes in to apply a bearhug and get the submission win.

They run down Ricky Steamabot for their upcoming match at the Meadowlands Arena. They're lookng past Steamboat and his pet alligator, on to Hulk Hogan. Sounds like an interesting match-up, considering where both guys were on the card, at the time.

Yes, he's billed as "King Curtis Iaukea" and hasn't been re-named "The Wizard", yet. Curtis Iaukea had appeared on TNT a few months earlier as just a regular oldster talking about his old matches, so I don't think they tried to pretend that this was someone completely different. Basic Kamala squash, with chops, belly-slaps, chokes and a few kicks. Sharpe makes a brief comeback by going to the eyes and stepping on the toes. Shoulder-block and a double chop to the neck swings things back to Kamala. Kamala stumbles a bit off the ropes, but still connects for his big splash to get the 3 count.

Jimmy Hart introduces our host, "Adorable" Adrian Adonis, backed by his bodyguard "Cowboy" Bob Orton. The guest is "Rowdy" Roddy Piper, who comes out with a steel pipe and to make fun of Adrian's moobs. Piper reads the WWF TV ratings and how The Flower Shop is rating the #1 ratig for constipation. Piper walks out and lets Jimmy Hart read the rest of the memo: the Flower Shop will not be seen next week, instead we'll get the return of Piper's Pit. Adrian flails away and knocks over his tables, in protest.

MIKE FEVER?! I wonder if he's related to Dr. Johnny? Bradley starts strong with an elbow and a kneelift into Jacques. Bradley lays down for a moneky-flip attempt, but Jacques stomps his forehead. Double-team chops on Bradley and a double drop-kick for Fever. The commentary's thrown, mometarily, to the French duo of Eduoard Carpentier and Guy Hauray, while Raymond works Fever's arm. Raymond whip him to the ropes for Jacques's flying reverse elbowsmash. Duck-under suplex from Jacques, then a powerslam. Tag to Raymond and they do their double-team senton somersault to score the 3. Bradley tries coming in, but eats a flying drop-kick from Jacques.

The Flower Shop Flashback: The Machines

Bobby Heenan asks Lou Albano to examine the Machines. When Heenan's back is turned, they swap out Super Machine for Giant Machine, then swap out again to frustrate Heenan. Keep the Machines off the mic and they're fun.

This was probably when Kirchner made the jump from midcarder to "jobber-to-the-stars". Collar-to-elbow tie-up between Studd and Kirchnher, which Kirchner blows by falling down too early. Charing sholderblock from Studd and then he whips Kirchner to each corner. Kirchner comes back with two clotheslines, then starts "hammering away". Kirchner foes for a slam, but Studd grabs the top rope and Bundy comes in to make the save. Slam from Studd, then Bundy comes in to deliver a reverse elbowsmash. Side back-breaker gets 2 for Bundy. They double-up on Kirchner for awhile, until Kirchner nails a shitty drop-kick on Bundy. Kirchner wanders into some more shots from Bundy, then wobbles over to tag SD. SD goes for a little southpaw clubbering on Bundy, until he's whipped to the corner and gets avalanched. Bundy makes the 3 count cover and that's all she wrote. So SD lasted only a little bit longer against Bundy than he did at WrestleMania I. Kirchner ws decent at selling in this match, but looked absolutely awful when he was supposed to be on offense. Probably a reason why he was demoted.

Stupid trivia, but it sounded like a track from Joe Satriani's 1986 album "Not of this Earth" was used for the replay. That's kinda' contemporary for the WWF.

Ken Resnick Interview with "The King of Wrestling" Harley Race

Resnick introduces Race as "Handsome Harley", but Race corrects him and insists that it's now "The King". Race targets Tito Santana, for their upcoming match at MSG. Race mentions that he's won more titles in wrestling than anybody else.

Final segment previews next week's card and includes a quick "musical review of this week's action" as they sign off.

Why'd You Watch This?
Not too bad for the debut episode. It was all tag-teaming, but like I said at the top, at least they pulled out the top-level jobbers...and Mike Fever. The main highlight of this show would be the Piper/Flower Shop segment and maybe the opening match. The rest is lively, but doesn't have anything truly unique. It seemed like this show would present matches a little more prestigious than the typial squashes on the old "Championship Wrestling", but after a few weeks it was the same ol' same ol'. Same way that future shows like "Shotgun Saturday Night" and "HEAT" started out as eyebrow-raising, but evenually became treadmills.