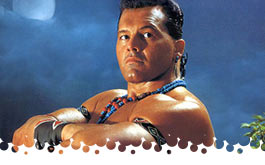 -A rare follow-up to a random show I picked awhile back. The WWF is in the midst of qualifying action for the new King of the Ring tournament. In fact, that's in effect for this week's Feature Match, as the undefeated Tatanka will take on Giant Gonzales. We lead off the episode with dueling promos from Giant Gonzales (well, actualy Harvey Wippleman) and Tatanka. The latter stating: "I fear no man" followed by a war cry. Our hosts are Vince McMahon, "Macho Man" Randy Savage and Jerry "The King" Lawler. Savage says that King of the Ring is as important as the WWF championship (dig it). Okay, then. But with so much going on in the World Wrestling Federation, let's get down to ringside for..

In case you forgot that this is the vividly colored era of the WWF, Scott has a neon orange singlet to remind us. Scotty starts strong with a duck-under double-leg takedown, short-arm cltohesline, and a full Nelson suplex on Ming! He then drags Ming over and lets him tag in Armstrong. Rick comes in...in his neon polka dot singlet...and drops Armstrong with a foreamr, then a belly-to-back overhead suplex. Rick comes into a seted chinlock (a 1993 "Steiner Recliner?"), then tags in Scotty for a belly-to-belly suplex and a drop-kick. Scotty allows another pity tag to Ming and hits him with a double under-hook powerbomb. Scotty lifts him on his shoulders for the top-rope bulldog from Rick for the 3 count. Wow, I forgot how much fun it was to watch the Steiners suplex people's brains out.

As usual, moderated by "Mean" Gene Okerlund. I'm pretty sure you can guess how Hacksaw opens his interview. He promises to avenge his name, his family (?) and his country, for the way Yokozuna dropped ass on him AND the American flag. While Hacksaw talks about how Yokzuna crushed him, most of his rancor is directed against Fuji. Otherwise, it'd seem silly "avenging his country" against the Samoan American from California. Fuji laughs it all off and says they'll wrap up Hacksaw in the flag, next time they meet.

Hughes with a chokeslam, at the bell, then a big vertical slam and elbow drop. Hughes pulls him up at 2, while the announce team talks about how "not much is known about Mr. Hughes, other than he was a former bodyguard and a collegiate athlete". I suppose there's a subtle kayfabe WCW reference, there. Thumpin' and a gut-wrench supelx from Hughes, as we get an in-set promo for the Reverend Slick, who says Hughes is headed in the wrong direction, but that he could help him. Another chokeslam scores the easy 3 count.

New vignette for the Smoking Gunns. This time they speak, introducing themselves as Bart and Billy. They're "on (their) way to the WWF to get a little tag team excitement". Firearms are probably not legal in the ring.

THey start with an odd game of footsie, until Backlund takes Zeller over with a monkeyflip. BAcklund with a lot of twisty mat work and the commentators star zoning out, debating Lex Luger's metal plated forearm and Bret Hart's entrance into the King of the Ring. Zeller does some (mild) animated heel work, including the ol' "see? I'm smart" point-to-head thing. Backlund catches him with a reverse roll into a leg bridge to get the pin.

Blackstone's making her debut on WWF TV. I think she would last about 6 months. If you look at the WWF in 1993 from a wide view, it's almost like they temporary adopted the "Southern Rasslin'" feel with their roster: Blackstone, Lawler, Luger, Steiners, Jim Ross, and later Jim Cornette and the Heavenly Bodies. Blackstone plays into Luger's gimmick, complimenting his physique and asking for some poses. She's actually setting him up, as she asks about the two screws in his forearms. Luger brags that WWF President Jack Tunney has okayed the metal forearm, but Blackstone keeps prying until Luger loses his cool and begins hollering. He targets Bret Hart, for what that's worth.

Marinez is pretty stocky and reminds me, a bit, of "the Italian Stallion". Martinez is quick, off the bell, as they go into an animated reversal and counter sequence. Virgil gets the upper hand with a flying headlock to slow it down, for a bit. Virg is caught on the apron, slides back in between Martinez's legs, then pulls him out for a do-si-do whip back into the ring. Virgil with a top rope flying clothesline (!), vertical suplex and another clothesline on an Irish whip reversal. Side Russian legsweep then gets Virg the 3 count.

McMahon makes a HIP reference as he claims that Michaels believes he is "the reincarnation of Elvis Presley". Actually, David Lee Roth would be the accurate reference, but Diamon Dave ain't dead. Michaels is the reigning Intercontinental champ, but this is obviously non-title. They hit the ropes and Michaels is in command with a leapfrog and a drop toe-hold. Jones tries a hammerlock, but Michaels ducks for leverage and send shim flying to the floor. Follow-up with a flying elbow...then Michaels hopes over to take a seat next to ring announcer Mike McGuirk and put his arm around her, in a funny spot. Vertical suplex and a slam for 2, but Michaels pulls up Jones, then connects with a top rope flying clothesline. Jones hops out of a press-slam attempt, but Michaels immediately blasts him with a super-kick and scores the 3 with a nonchalant cover. I usually don't like Michaels, but that was an entertaining squash.

King of the Ring Report with "Mean" Gene Okerlund. Brought to you by ICO-PRO, and here's a clip of Lex Luger promoting it, while in the gym....and you can tell he's reading a cue card. We then get a rare appearance of Hulk Hogan, who's "on location" from the beach of Clearwater, Florida. "They know that Hulk Hogan's through with Hollywood! That he came back to win the belt for the fifth time, brother!" Back in the studio, Gene warns that fans believe Hogan has been pre-occupied with movie making, but Yokozuna and Mr. Fuji are focused on winning the WWF Championship from him. Hmm. Quick promo from Razor Ramon who's set to face Bret "The Hitman" Hart in the opening round of King of the Ring. Other qualifiers for the tournament include Bam Bam Bigelow and Lex Luger. Plus, on Wrestling Challenge, we'll get another qualifying match (actually a rematch), as Doink (the Clown) will face Mr. Perfect.

Tatanka goes right into his war-dance, but Gonzales fells him with one blow. Chokey/punchy/kicky and I notice that the referee is Bill Alfonso. Gonzales whips Tatanka to the ropes for a big boot, then tries a choke, but Tatanka suddenly syarts fighting back. Tatanka goes upstairs for two flying chops, but gets caught in another choke on his third attempt. Gonzales won't stop choking, and shoves Alfonso to draw the disqualification at about 3 minutes. Gonzales gloats in the ring, while Tatanka staggers to the outside... and this segment is just BEGGING for a run-in, but it never happens. Well, we do get referee Joey Marella. Wasn't expecting much, but this was terrible.

"Mean" Gene references WrestleMania IX and how they retained the belts via disqualification. Gene then asks them about the Steirn Brothers and tries to stir things up. They say they might sign a contract to face the Steiners, but they'll have to examine it.

McMahon wraps things up and mentions that next week we'll get TWO debuts: the Smoking Gunns and Adam Bomb. We'll also get another King of the Ring Qualifier between Crush and Shawn Michaels. Both guys cut hype promos. Crush still has his "Hawaiian accent" in case you were wondering.

Why'd You Watch This?:
King of the Ring hype dominates this episode, which is understandable. The other big deal seems to be Lex Luger's steel plated forearm. They also finally seem to be officially moving forward with Money, Inc. vs. the Steiners. Not exactly memorable angles, but at least things are moving.

back to WWF Superstars Index