Mainly to exercise my typing fingers, it's a completely random episode of "Superstars" from Daytona Beach, Florida. Hosted by Vince McMahon and "the executive conslutant of the World Wrestling Federation Champion, Ric Flair", Mr. Perfect. Vince hypes the fact that Hulk Hogan will be challenging for Flair's WWF title at WrestleMania VIII in the HoosierDome. Hmm... I forgot that they actually promoted that as the main event for a brief time. But with so much going on in the World Wrestling Federation, let's get down to ringside for...

The Disasters are, of course, Earthquake and Typhoon, smack-dab in the middle of an Official Feud with WWF tag champs the Legion of Doom. I kinda' liked seeing that feud at the time, because it was essentially a WWF version of an old NWA "Road Warriors vs. Monster Bad Guys" program (Powers of Pain, Skyscrapers, Samoans, etc). Yet, it never had an official ending as the LOD disappeared about two weeks later, in one of the weirdest title switches in WWF history. Earthquake starts by "hammering away" on Avery, then pancakes him with a belly-to-belly suplex and drops an elbow. Typhoon comes in and, thankfully, Jimmy Hart is there to tell him to "work on him, baby, work on him". Avery is sent into the turnbuckles, slips, and just about gets scalped by a Typhoon clothesline. Typhoon even does a Stinger Splash or Avalanche in the corner, before Quake returns. Double-team avalanche on Avery, but Hammer can't stands no more and enters the ring. Double shoulder-block takes care of Hammer. Quake slams Avery, then drops ass. Typhoon comes in for a big splash to get the easy 1-2-3. Y'know, if any wrestler deserved to have that moved called a "splash", it'd be Typhoon.

Gene plugs the new "1992 WWF Merchandise Catalog", where YOU can order your very own Legion of Doom Wrestling Buddies! What little kid wouldn't want to snuggle up with Hawk and Animal? We're also told to order WrestleMania VIII, featuring Hulk Hogan vs Ric Flair. That's not all, as THIS SATURDAY NIGHT, it's the return of "Saturday Night's Main Event", featuring Intercontinental Champion Roddy Piper defending against Da' Mountie. Plus a huge tag match, with Hulk Hogan and Sid Justice taking on Ric Flair and The Undertaker. Yet we're shown that it was JUST LAST WEEK, at the official WrestleMania VIII Press Conference, when Sid Justice took offense to Hulk Hogan being named the #1 contender for Flair's title. This was.... BOGUS! The segment is concluded with a new promo from Sid, who says he was misunderstood and "sincerely" apologizes to Hulk Hogan. Gene stirs the pot a little more as we go to commercial. I'm sorry, but Sid's BOGUS reaction and this whole angle never gets old for me. 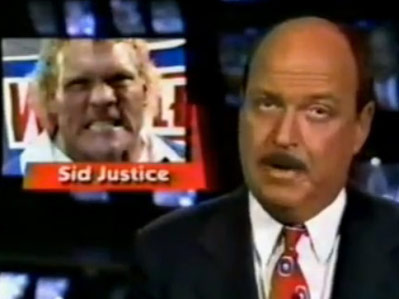 Y'know what kinda' bums me? Aside from his wins against Ted DiBiase, ol' Kato was probably the highest guy on the card Virgil got a win against. Virg starts with a go-behind takedown into a pinning combo for 2. Kato blocks a roll-up off the ropes, then misses an elbow drop. Virg bounces off the ropes for a shoulderblock, then again bounces around and manages a backslide for 2. Kato gets a few shots in as we get an inset promo from Repo Man, who threatens to re-possess Virgil's career. Really? I thought repo men were usually sent to re-possess something of value. Mr. Perfect even picks up on this. Virgil mounts a comeback with a reverse atomic drop, but gets tossed out of the ring. Kato cleanly suplexes him back inside for 2. Kato thumps him into the turnbuckles, but Virgil goes into his little boxing routine and lands some jabs. Kato is sent into the corner for "eight! Eight! Eight Vunderful punches! Ah-ah-ah-ah-ah" from Virgil. Kato whips him to the other corner, but Virgil flips over and applies his version of the Million Dollar Dream to get the submission win.

Hype for an upcoming Boston Garden show on February 29. We get dueling promos from the participants in that night's Main Event: Ric Flair and The Undertaker versus Hulk Hogan and "Rowdy" Roddy Piper. Piper's his usual "Hot Rod" self, as he concludes the promo by saying: "Showdown?! Yuh-huh!"

Seems downright weird seeing Jake walk to the ring without a snake bag over his shoulder. Russel looks to be about a 20 year old pudge with little-to-no build. They lock-up and Jake powers Russel to the corner, where he gives a clean break. Second time, Jake's not so nice, as he pounds the pudge out of Russel. He tosses him outside, then slides out to deliver a slam on the floor. Referee "Not So Dangerous Anymore" Danny Davis admonishes Jake. He rolls Russel back in, then gets into Davis' face, as if to say: "see? I'm playing fair and square". Jake hits the short-arm clothesline and signals for the DDT. A good portion of fans pop for it...so Jake pisses them off by pushing Russel around a little more. After a few more seconds, he hits the DDT--- saying that he'll hit it when HE wants to, as he makes the 3 count cover.

Hype for an upcoming Worcester Centrum show on February 24th, as we get promos from the Legion of Doom and the Nasty Boys, who were scheduled to meet for the tag titles. Obviously, that match never went down, as I'm guessing the card had to be re-shuffled somewhat. Off-screen the LOD had actually lost the titles a day before this broadcast. Anyways, Hawk gets a mildy humorous line as he says: "last time we wrestled, I remembered that smell in your trunks. You certainly are NASTY. Take care of that business".

I wonder if Bill Badd ever hung out with Diamond Dallas Page in the AWA? Jobbers try to attack, but Sarge and Hacksaw soon double-team them with clotheslines and the obligatory Mid-Ring Irish Whip Collision. Good guys dominate the match with plenty of thumps n' clotheslines. Sarge brings Badd over to their corner, just so Hacksaw can "Hoooooo" right in his ear. Sarge then whips Badd into a Duggan clothesline and that's that.

The Funeral Parlor with Ric Flair and Mr. Perfect

Oh-h-h-h-h-h-h yesssss. True, Brother Love was hella' annoying, but I really hated Paul Bearer as host of the Funeral Parlor even more. Namely, because I thought the character "Paul Bearer" was just TOO over-the-top and the endless playing of the Funeral March was usually much louder than it needed to be. Anyways, Flair puts over the upcoming SNME match against Hogan and Sid. Nice touch that Flair promotes it as being "tonight", since Superstars usually aired on Saturday mornings in most markets.

Official TV debut of Papa Shango. Unlike most new arrivals of the time, Shango seemed to be on TV almost immediately. I don't even think he worked house shows under his old gimmick of "Soultaker" or any other name. He had a few vignettes that aired in January and about two weeks later, here he is, in maybe his second match for the company. Wolfe's not sure what to make of him, so he hesitates which allows Shango to begin "hammering away". Shango delivers a side backbreaker, as we're shown Jamison sitting in the crowd, trying to ward off Shango with a finger crucifix. Shango flips Wolfe up on his shoulders and delivers a reverse shoulder-breaker to get the pin for a total time of about 90 seconds. Afterwards, Shango gets his dollar store trinkets and performs a voodoo ritual over Wolfe. Mr. Perfect: "I'd like to see what Momma Shango looks like".

Commercial break, but included is Hulk Hogan's Right Guard commercial. "A sublime palette of odoriferous emanations". Great commercial that had a pretty decent lifespan on "normal TV". I think it ran for about two years.

Mountie starts off quick with a series of blows and his reverse flying elbow. Mountie thumps him into the corner, then tosses him over the top as we get an inset promo from "Rowdy" Roddy Piper. Piper's hilarious, saying he'll mount him and "I'm such a good wrestler, I can put a sandwich on my back and starve you to death". Back in the ring, Mountie tosses Casey around, then lands a flying drop-kick to get the pin. After the bell, the "shock-stick" (WITH sound effect) is applied for good measure. Just another way to build up Saturday Night's Main Event.

More Boston Garden hype, as we get a promo from "Million Dollar Man" Ted DiBiase and Sensational Sherri about their upcoming no-time-limit match against "El Matador" Tito Santana. Then it's the Big Bossman, shouting Fightin' Words at Repo Man. Punk!

Final segment previews next week's card, then some final promos from The Undertaker and Hulk Hogan about Saturday Night's Main Event. Undertaker actually signals out Sid Justice, calling him a "marked man".

Why'd You Watch This?
I don't think I've ever recapped a "weekend syndicated jobber squashin' show" before and I know why. If I do one of these again, I'll probably do the abbreviated bullet format. While they're good time capsules of a certain era, they're fairly boring. They almost have the same effect as flipping through a WWF Magazine from the same period-- which might've been the intent. Even though I was a big fan of this stuff at the time, I would routinely skip the weekend shows and just watch Prime Time Wrestling on USA, since it had all the angles, promos and any other significant events that happened.... plus a semi-decent "feature match".

What's here is a load of hype for Saturday Night's Main Event on FOX. They usually didn't do that for the NBC series; as about the only thing I can remember was a quick promo at the end of "Superstars" telling us to "check our local listings". It works, because I actually want to dig up my old VHS copy of that FOX SNME.

For trivia or for smark purposes, this show's also a little odd because of the recurring hype for Flair/Hoagn at WrestleMania VIII, and especially the house show promos. Sherri makes one of her final appearances as DiBiase's valet (and looking like she's about ready to tear his clothes off), while the LOD make one of their final appearances as tag champs.

In summary, if you've read this article, you can skip tracking down the show. Nothing worth seeing. Unless you're Momma Shango and want a copy of your hubby's official debut.