- From the Joe Louis Arena in Detroit, MI. We're coming back for the 3rd edition of the Main Event, and unlike the previous two, a major storyline wasn't wrapped up into any of the matches. Hogan vs. Warrior was already established for WrestleMania VI, and both men were in programs that were either finishing loose ends, or just there to try and get star power into the match without giving anything major away for free. On top of the two matches signed, a special enforcer was to be at ringside for the Hogan vs. Savage Championship match. Undisputed Heavyweight Champion, James "Buster" Douglas. Yes, the guy who KO'ed Mike Tyson roughly two weeks earlier in Tokyo, and thus killing Heavyweight boxing for years to come. 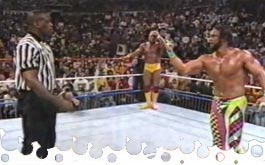 - Mean Gene Okerlund is standing by with comments from the Royal Couple, and they're not going to take any of Buster Douglas' crap, should he get himself involved in the match. Hulk Hogan is next, and I've heard and typed the name Buster Douglas more times in the last 10-minutes than I'd care to count. Hogan puts Douglas over, but too bad Douglas went down like a sack of potatoes to Evander Holyfield soon after.

Because we need MORE promos, Gene is standing by with James Douglas, who won the belt for his COUNTRY (from that evil foreign villain from Catskills, New York) and for his recently deceased mother. As much crap as I give Douglas for being a flash in the pan, his story becoming the Heavyweight Champion really makes you believe in the underdogs.

(Special Enforcer: James "Buster" Douglas)
In a quick side note, Mike Tyson was originally advertised for this, but common belief is that the WWF decided to go with Douglas on account of his winning the Championship from Tyson, rather than hoping Tyson would come on, only a few weeks after losing his belt, and being portrayed as a recent loser. Douglas gets the honor of showing the belt off before the bell rings. He also came to the ring to some REALLY wussy music. Lockup, and Hogan shoves Savage across the ring, and Savage quickly takes a breather. Savage grabs a headlock, but fails at a shoulder block. Hogan tries to follow Savage out of the ring, but Douglas cuts him off. Douglas is a closet Macho Madness fan! Savage with a few cheap shots, then knocks Hogan out with a running high knee. Savage to the top rope, and Douglas stands in the way of Savage this time. Sherri takes a bump for the hell of it, and Hogan lays into Savage with rights. Irish whip, and Hogan with a clothesline. Whip to the corner, and Hogan follows with an elbow. Hogan remains in control, planting Savage with a slam, and drops a pair of elbows. Hogan hits the ropes and gets tripped by Sherri for it, allowing Savage to attack from behind. Whip to the ropes, and Savage with his signature clothesline for a two count. Savage with a knee drop, followed by some choking. Sherri gets in some choking herself, despite Douglas' attempts to break things up. Douglas eventually grows a set and tosses Sherri from ringside. We return from a commercial break, with Savage still in control, working a sleeper hold. Hogan fights back to his feet and escapes with elbows to the midsection. Criss-cross, and Savage nails Hogan with a clothesline, originally making it look like a double knockout spot. Savage tosses Hogan outside, then comes down with a double axehandle. Back inside, and Savage with another axehandle for a two count. Savage drops a knee across the chest, and covers for a pair of two counts. Savage with rights to knock Hogan out of the ring, and once again, Douglas gets in the way of things. What an annoying prick. Savage heads to the top rope, and comes crashing down with his signature elbow, but Hogan kicks out with force, and it's Hulk Up Time! Three roundhouse rights and a big boot sends Savage out of the ring. We get a referee bump, and Hogan drops the leg. Douglas crawls in, and gives the three count at 9:53. Savage disputes the finish and gets in Douglas' face, so naturally, Douglas knocks him out with a semi-decent worked pair of rights. Buster Douglas not only KO'ed Tyson, but performed his spots in a wrestling ring better, too.

- Jesse Ventura takes a break to interview Jimmy Hart and his men, Dino Bravo and the (no longer Canadian) Earthquake. Dino Bravo is challenging for the Intercontinental Title, and was in the ring with Warrior when Earthquake made his debut, so yes, there was something to this match... my God, is it going to suck.

- Mean Gene Okerlund is with Warrior for one of Warrior's thousands of nonsensical ramblings about not needing life insurance. I don't think you NEED it, but it doesn't hurt to have it. Warrior sure does have some white teeth. He must practice decent oral hygene. Sorry, I was so bored by this promo, I was staring at his teeth.

Please let this be short... no offense to Bravo (he's not that bad in the ring, IMO), but boy did he luck out into being associated in the top of the card program for most of 1990. Warrior hits the ring, and after a criss-cross, Warrior takes Bravo down with a powerslam, then comes off the second turnbuckle with an axehandle. Earthquake yanks Warrior off the ropes going for it again, but Warrior is unphased, and takes Bravo down with a hip toss. Quake trips Warrior again, and Bravo knocks him out of the ring with a clothesline. Warrior rolls under the ring, and drags Jimmy Hart under with him... Okay, that was somewhat amusing. Jimmy Hart screams murder, coming back out without his shoes OR PANTS. Warrior adds injury to insult (and possible rape) by press slamming Hart onto Earthquake. Bravo attacks from behind, allowing Earthquake a cheap shot and slam. Back in the ring, Bravo pounds away with axehandles, and slaps on a bearhug. Warrior counters briefly, but Bravo clobbers him and connects with the side suplex for a two count. Warrior goes through his own Superman Comeback routine, and lays Bravo out with a headbutt. Warrior with a pair of clotheslines, followed by a diving shoulder tackle. Warrior hits the ropes, comes down with a splash, and the three count is made at 4:13. Earthquake joins Bravo in a post-match beating. Warrior manages to toss Bravo from the ring, but Quake puts Warrior down and drops a pair of elbows. Earthquake heads to the middle turnbuckle but Hulk Hogan runs in, tears off his shirt, and dares Earthquake to do something about it. Warrior doesn't appreciate the help though, because he's the Ultimate Warrior. Watchable, but way over-booked with constant interference from Earthquake.

- Vince McMahon is standing by, as we get a FLASHBACK to the Royal Rumble. Hogan and Warrior were left alone in the ring (briefly), and we get the most famous double clothesline spot in Sports Entertainment History. This, THIS, was all they needed to set the main event for WrestleMania VI. That's what I call having a strong fanbase for two top of the card performers. One week later, Warrior and Hogan were victorious against Mr. Perfect and the Genius, but miscommunication lead to Warrior nailing Hogan with a clothesline.

- We end things with even more promos from Hulk Hogan and the Ultimate Warrior... and James "Buster" Douglas. Douglas says he and the Hulkster are going out drinking. Hogan's a Buttermilk man, but he prefers Whole Milk. HAR HAR HAR!

Final Thoughts:
Not near the levels of the previous versions of the Main Event, but still did its job, I guess. The point of teasing that the Title for Title aspect was in jeopardy was the only real suspense going into this show, since unlike the previous examples, nothing earth shattering went down. No evil referees, no exploding tag teams.... just a couple of successful title defenses to ensure that Hogan was going to WrestleMania the Heavyweight Champion, and Warrior as the IC Champion. Definitely not must see, and honestly, I don't think I can recommend it for casual viewers either, when the highlight is a Savage/Hogan match that pales in comparison to what they were capable of doing.