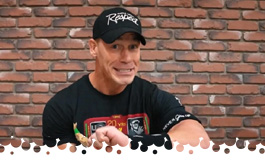 Live from Amalie Arena in Tampa, Florida. WrestleTix estimates attendance at 13,454. Our hosts are Michael Cole and Wade Barrett.

Bray Wyatt opens the show for his weekly dose of insanity. While Bray still has adoring fans in attendance, I am sensing a mixed reaction starting to set in. Bray tries to apologize to a cameraman who got caught in last week's mayhem, but he's interrupted by LA Knight. He accuses Bray of paying off a goon to dress up as Imposter Bray, which is now formally being acknowledged as Uncle Howdy (which I might have known had I not skipped WWE television for the better part of the last 7 years). They agree to a match at the Royal Rumble, then Uncle Howdy invites himself to the ring. Uncle Howdy sizes up both men before putting Bray down with Sister Abigail. And that's a wrap. I'm actually kind of sad that this was just a basic segment with theatrical entrances and not another bewildering mindf*ck.

Sami Zayn tries to get past Paul Heyman to talk strategy with Roman Reigns. Paul doesn't like the optics of fans cheering for Sami when standing next to the Tribal Chief, but lets Sami in anyway.

Sheamus (with the Brawling Brutes) vs. Solo Sikoa (with The Usos)

Michael Cole offers his condolences to friends and family of the late Don West in classy fashion. Sheamus and Solo aren't shy to hit each other as hard as they can early on. Sheamus hits an outside clothesline, and Solo considers using a chair. Back from commercials, Solo is working over the shoulder. Sheamus escapes a chinlock, but Solo answers with a Samoan Drop. Solo gets cocky and Sheamus capitalizes with a clothesline. Power slam by Sheamus, followed by the 10 overhead smashes. Solo hits a thrust kick, Sheamus responds with a knee to the skull for 2. Solo grabs Sheamus by the beard for a headbutt, but Sheamus retaliates with the Irish Curse Backbreaker. Sheamus applies the Cloverleaf, Jey distracts the ref while Jimmy rescues Solo. The Brawling Brutes brawl brutishly with the Usos, and Sheamus dives onto everyone. Solo drags Sheamus into the ring post and then hits a Uranage onto the apron. The Samoan Spike finishes at 11:09. Rock solid match with a ridiculously hot crowd, ***¼.
Winner: Solo Sikoa

Bloodline aren't finished. Solo wraps a chair around Sheamus' neck and prepares a hip attack, but Drew McIntyre marches in to break it up.

Video package highlighting recent nefarious deeds committed by Ronda Rousey, and highlights of Raquel Rodriquez winning last week's gauntlet match (which I was happy to skip). Ronda tried to serve up Shayna Baszler as a last minute entrant, but Raquel made it past her to earn a title shot tonight.

Raquel shoves Ronda out of a lockup, but Ronda responds with hard strikes. Ronda gets overconfident, and Raquel capitalizes with shoulder blocks and a spinning slam for 2. Ronda tries to take a timeout, but Raquel press slams her into the ring. Raquel tosses Ronda into the buckles for a series of running attacks, but misses a head of steam into the post. Back from commercials, Ronda is working over Raquel's previously injured arm. Raquel shows signs of life, so Ronda hits an exploder suplex. Raquel sacrifices her bad arm to hit a clothesline for 2. Ronda reverses a slam into an armbreaker, but Raquel reverses into a Sharpshooter. Ronda counters into an ankle lock. Raquel escapes and hits a flapjack to earn a breather. Raquel hoists Ronda into the air by one arm, but they both spill over the ropes, where Raquel powerbombs the champion onto the apron! Back from MORE commercials, Rodriguez hits a delayed vertical suplex. Raquel powers up for a slick fallaway slam (and the crowd is going nuts). Ronda applies a desperation sleeper, but Raquel knocks her off in the buckles. Big boot by Raquel, kick to Shayna, and Vader Bomb Elbow Drop, but Shayna pulls Ronda into a rope break! Raquel tries a superplex, but Ronda reverses with a top rope armbar! Ronda follows with an avalanche crucifix bomb and gains the instant tapout at 16:45! I didn't want to like this... but it was AWESOME! The highspots were well placed and maximized the drama and emotions from the live audience. They tried many creative spots and counters that paid off. The finish was absolute fire. Dammit, I feel dirty, but ****¼.
Winner and still WWE Smackdown Women's Champion: Ronda Rousey

Charlotte Flair immediately arrives to ruin Ronda's moment. She gets a nice pop and has mediocre new entrance music to boot. Ronda sarcastically asks how Charlotte's arm is feeling and assumes she wants a shot at the Royal Rumble. Charlotte would prefer a shot tonight, because OF COURSE SHE WOULD. That seems fair. The fans give this the YES! YES! YES! treatment. Adam Pearce fails to run in to stop this, so we've got another title match.

Big boot by Charlotte gets a close nearfall. Charlotte hits a spear, but Ronda rolls through for an ambar, but Charlotte leans back to pin her at 0:41! Crowd LOVES this. Me? I'm sick of ambush title wins, but this time it got over, so what do I know?
Winner and new WWE Smackdown Women's Champion: Charlotte Flair

Bloodline relax in their locker room. Roman and Sami appear to be on friendly terms ahead of their tag match against John Cena and Kevin Owens. Sami wants to make sure that Roman isn't bothered by his popularity, Roman doesn't seem to care.

Video recap of Dominic Mysterio and Rhea Ripley crashing the Mysterio family Christmas Eve party. Rey forces them outside, Mama Mysterio slaps her son, and the police get involved. Dominic is taken away in handcuffs and pleads that he won't make it in jail (LOL!). Mysterio family drama makes for the worst angles that I enjoy the most, but don't tell anyone.

The tag team division have a friendly hangout in the locker room, and Top Dolla is a good sport about everyone making fun of his botched dive from 2 weeks ago. Well, at least until Ricochet steps in and cuts him too deep, and Top Dolla has to be restrained.

Imperium come to the ring to commemorate GUNTHER's Path of Destruction over the second half of 2022. They play a convincing video package, and then are joined by Braun Strowman. No "man" can beat GUNTHER, but what about a "monster?"" The Imperium henchmen jump Braun and get easily tossed out. GUNTHER tries a chop, but Braun effortlessly blocks and takes him down. Braun charges through the henchmen, but GUNTHER dodges to send him crashing through the barricade. GUNTHER hits some chair shots and the lackeys throw Braun into the steps. GUNTHER targets Braun's arm, luckily Ricochet runs in with a chair to save the day. He must not follow Braun on Twitter.

Owens and Sami start by rekindling their not-so friendly rivalry. Owens hits a back senton and makes eyes at Roman. Sami rakes the eyes, but Owens reverses his suplex. Roman casually asks for a tag and steps in to confront Owens. Fans want Cena, and Owens seems ready to make a tag, but Roman clotheslines him down to take control. Back from commercials, Owens tries to fight out of Bloodline's corner, takes Zayn's suplex, but pop up for a clothesline! Roman attacks Cena from behind to prevent a hot tag. Owens blocks Sami's Helluva kick with a superkick, but there's no Cena to tag. Owens goes it alone with a pop up powerbomb on Sami for 2 when Roman ambushes. Roman misses the Superman Punch, Owens capitalizes with a frog splash but Roman kicks out! Roman counters with a short arm Superman Punch, but misses a spear into the ring post. The fans roar as Cena pulls himself onto the apron and gets the hot tag. Cena runs wild through Zayn with his classic moveset. He mocks Roman and lures him into a slam. Owens tags and joins Cena in delivering stereo Five Knuckle Shuffles. Attitude Adjustment on Roman! Stunner on Sami finishes it at 10:59. This was like the greatest house show main event of all time, ***.
Winners: Kevin Owens and John Cena

Final Thoughts: Aside from the stupidity of the Charlotte title win, this was a tight show that indicates that at least Smackdown is in a really good place heading into 2022. The building was basically sold out, the stars are over, the wrestling style is over, and all of this would have been true had John Cena not been available tonight. Barring any Vince comeback, 2023, might be the best quality year for WWE in ages.