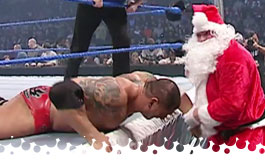 The first-ever DWS #XmasXcretment has led us to ...this. A somewhat special holiday themed episode of Smackdown. We are in the (since renamed) Time Warner Arena in Hampton, Virginia. A cold opening has King Booker and Finlay talking, backstage, to Smackdown General Manager Teddy Long. They're requesting a rematch from Armageddon against John Cena and Batista. Long says that can't happen, but instead they can face The Undertaker and KANE, the Brothers of Destruction...tonight! Opening graphics roll, set to some unrecognizable, disposable, "metal" tune. Of note, Some Canadian Guy and Hornswoggle are in the video mix. Our hosts are Michael Cole and John "Bradshaw" Layfield. But with so much going on in World Wrestling Entertainment, let's get down to ringside for...

We get some fireworks, cuz' fans love that. Seriously, they seem really into Batista and the pyro. Batista starts off by wishing everybody Happy Holidays (awww). He says he's in the holiday spirit, because he's sporting his red trunks. More like a dark pink, but I'm not going to inspect. He then recaps his year and how he worked his way back to the top to win the World Heavyweight Championship. All of sudden, he's interrupted by Christmas music and...Santa Claus. Here comes Santa Claus, here comes Santa Claus, right down the entrance aisle. He's got t-shirts for the fans and a DVD (Roddy Piper) for Cole. He hops in the ring, gives the champ a box and they pass out candy canes. Suddenly he smacks him with a lead pipe and Santa Claus is a jerk. For the record, I just sang those last four sentences, in my head, to the tune of "Here Comes Santa Claus". Try it. Once. Then forget we ever had this discussion. JBL and Cole clairfy that this is NOT Santa Claus, rather he's "Bad Santa". Santa heads to the back, but it cut-off by Teddy Long, who instantly books him in a match against Batista. So now we've got...

Non-title, by the way. Santa stomps and kicks Batista all over the ring for a brief spell. Single-arm DDT from Santa! Batista comes back with a clothesline, a big spear, then rips off Santa's beard, wig and hat to reveal... Sylvan Grenier. Ummm, okay. Powerbomb from Batista scores the 3 count pin at about the 1 minute mark. Well that was...weird. I feel like Heath Slater would've been "Santa", had he been around at this time. I'm kinda' wishing Jim Ross was on the call, because I would've lost my poo hearing him scream: "Good god almighty!!! The World Champion has just beaten the CRAP out of that DAMN Santa Claus!!!"

Flashback to Armageddon, where Benoit thought about putting Vickie in the sharpshooter, until Chavo made the save. A little eerie/creepy how JBL is going on about Benoit is a terrible human being who thought about attacking a woman. Seeing these two guys come out, I can almost hear Mike Tenay saying: "what a way to kick off THUNDER!" Charles Robinson is even our referee. CHavo starts clubberin' but soon runs into some vicious chops and a snap suplex from Benoit. Chavo fights back with some forearms, a slam and an elbowdrop off the ropes for 2. Drop toe-hold, as Benoit tries for the Crippler Crossface, but a rope break is called. Chavo goes for a slam, but Benoit hops out of it and delivers his signature German suplex. He tries for another, but both guys tumble over the top rope to the floor. Commercial break and we come back with Chavo working the back in a submission hold. Benoit breaks with a belly-to-back suplex. Nice over-the-shoulder backbreaker from Chavo for 2, then he returns to working the lower back. Chavo misses a drop-kick, as Benoit tries to apply the sharpshooter. Benoit gets momentum, until a sudden knee-lift from Chavo. Benoit is right back with some vicious chops, a face-first backdrop and three German suplexes. Upstairs for the big headbutt..and it connects! Yet Chavo kicks out at 2! Superplex attempt from the top, but Chavo wins the exchange and goes for the frogsplash! Benoit gets the knees up and applies the Crippler Crossface! That's the cue for Vickie Guerrero to grab the US title belt and smack Benoit with it, triggering the disqualification. Not too bad, especially the second half.

-Afterwards, Chavo and Vickie argue, as he "accidentlaly" shoves her. Benoit tries to be a gent and returns, only to get a Pearl Harbor beatdown from Chavo.

-Backstage, King Booker, Finlay and Queen Sharmell are worried about facing the Destruction Bros. Booker's so concerned that he's dropped his phony accent.

Helms demands some competition and plugs himself as the "longest reigning champion on Smackdown". He suggests that maybe he should move up to the heavyweight division. Things are interrupted as The Boogeyman makes his entrance. Helms attacks him as he slides under the ropes, but it's not long before Boogeyman's in control, stompinga round and delivering a clothesline. Boogey digs into his pocket for a Fistful of Worms, but Helms bails and runs out into the crowd. For no real reason, ring announcer Tony Chimel gets the house mic and says: "he's the Boogeyman and he's comin' to getcha'!" Boogeyman eats some worms, then grabs Chimel and tries to shove some down his throat. Slow-mo replay of the worm-eating, since it's the holidays.

Mercury comes out to show-off the nasty facial injuries he received at Armageddon's tag team ladder match against the Hardy Boyz. Carl Grimes would be proud. They replay the Armageddon incident, several times, in slo-mo, because it's the holidays. Some fans give him a standing ovation, out of respect. He calls out Matt Hardy, who enters the ring and tries to smooth things out, saying it was all in competition. Mercury shoves Hardy and dares him to fight back. Hardy refuses, so instead we get Mercury's tag team partner...

Another "impromptu match". Hardy's still in his street clothes, but can you ever tell with him? They punch away, back-and-forth, until Nitro pulls things to the floor. Back inside for some post-to-post whips and Hardy lands a bulldog for 2. Nitro thumps back and gets a reverse neckbreaker. He hops outside and pulls out a ladder... which was apparently disallowed and has disappeared when we return from commercial. Replay shows that Hardy nailed with Nitro with a baseball slide while he was carrying the ladder. They fight on the top turnbuckle, with Hardy performing a belly-to-back suplex to send both guys napping on the canvas. Melina interferes, allowing Nitro to catch Hardy with a flying kick. Nitro pulls his torso over the apron and connects with anotehr kick. Catapult on the bottom rope scores 2 for Nitro. Nitro misses a springboard kick, as Hardy hits a desperation clothesline. Knees and kicks to the mush gets and he Side-Effect get 2 for Hardy. Neckbreaker, then Hardy goes up top for a flying legdrop...but only for 2. Hardy goes for his Twist of Fate DDT, but Nitro counters into a backslide, leverages his feet on the ropes and get the 3 count! Old-school heel finish, but I didn't mind.

JBL's "appalled" at the types of matches Teddy Long has been booking lately; namely Armageddon's Inferno Match between Kane and MVP. JBL even references the Bible, to drive his point home. Long never arrives, so JBL blames all the "sick people" in the crowd for these things. So I guess this was just a segment to get JBL over as a heel announcer.

None shall have a last name! JBL and Cole spend most of the match talking about how hot the women---errrr, DIVAS--- are. Ashley and Kristal start with ...some stuff. Sloppy arm-wringer from Layla allows Jillian to tag in. Backbreaker gets 2 for Jillian, as the announcers still go on about "the sexiest women in the world". Jillian tries a somersault elbow, but Layla kicks her in the back. Ashley gets two hurracanrana manuevers, then all four brawl. Monkeyflip attempt from Ashley is blocked, as Jillian uses the ropes for 2. Layla snaps Jillian's neck on the top rope. Ashley leaps from the top with a flying elbow to get the 3. We get a replay of the pin, with a double jugg shot to make teenaged boys happy.

Back from commerical, Michael Cole is in the front row to interview Vladimir Kozlov. He's not a heel or a face... just some Russian dude who wants to wrestle in WWE. He seems pretty enthusiastic and friendly, actually.

Always thought it was kinda' refreshing that FINLAY got over. In WWE in 2006. Boooker and Taker start by duking it out. Taker targets Booker's arm and does the "old school" rope walk. He tries the same on Finlay, but Booker shakes the rope and Taker gets crotched in the li'l tombstones. Booker with a super-plex from the top turnbuckle! Finlay delivers some forearm uppercuts, until Taker comes off the ropes with a flying DDT. Kane comes in to clean house and deliver a side-slam to Booker. All four men enter the ring, as Finlay and Booker both try to attack the Brothers' feet with their chins. They motion for a double chokeslam spot, but Finlay and Booker bail to send us into commercial. Back from break, Kane is beating away on Booker in the corner. Booker ends up with his neck exposed on the apron and gets an Undertaker legdrop. Vertical suplex gets 2 for Kane. Finlay tries to take on Taker, but eats a boot and gets "snake-eyes" into the corner. Undertaker charges with a kick, but Finlay ducks and Taker flies to the floor. Booker sneaks up and hits him with a super-kick. In the ring, Kane tries something from the top, but Booker counters with a flying heel-kick. Reverse thrust-kick, then Finlay comes in to beat on Kane. Not slowing down, Booker hops outside and blasts Undertaker with a steel chair! Kane gets worked over for awhile, then it's Finlay's turn to hop outside and smack Undertaker with his shillelagh. Kane gets double-teamed for a few more minutes until a double-clothesline spot. Hot tag to Taker for the house-cleaning. Charging chest-splashes to both bad guys in opposite corners. Taker tries for a double chokeslam spot, but they kick him in the guts. They hits ropes, then Kane returns as we get STEREO chokeslams. Undertaker plants Finlay with the Tombstone Piledriver and that's the easy 3 count. Just your basic "send the fans home happy" match; almost felt like an exhibition with nothing at stake. Cole and JBL sign off, wishing us all Happy Holidays.

Why'd You Watch This?
Pure and simple: this was a holiday-themed episode. Otherwise, I wouldn't have touched it. You can't get much more Christmas-y on a wrestling show than booking a match with Santa. Little light on the wrestling, as we had no less than 4 in-ring talking promo segments. I kinda' liked Benoit/Guerrero and even the main event. I'm not a follower of the Undertaker, but he could put on some good work around this time. 10 years sure flew by fast, huh?