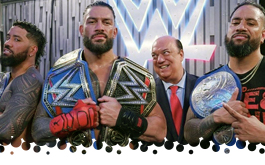 Live from Chicago, Illinois. Our hosts are Michael Cole and Wade Barrett.

Sami Zayn arrives with a goofy smile on his face. He expects to be honored as a "made man" in the Bloodline tonight.

Morgan and Nox enjoy a hot start, but Kai answers with a handstand kick. Sky tags, but Nox greets her with a facebuster. Double suplex gets 2 on Sky. Kai interferes with an enziguri to Morgan, which prompts Liv to dig out a kendo stick. Nox talks some sense into her partner, and they manage to cut off Damage CTRL's ambush attempt. Liv distracts the champs so Nox can hit a diving crossbody outside. Back from commercials, Kai double stomps Nox for 2. Nox saves herself with a headbutt and Liv storms in on a hot tag. Kai cuts Morgan off with a running boot, and Liv suffers a double team powerbomb. Morgan hits a Codebreaker, and then a second Codebreaker off of Nox's back. Nox hits the Shiniest Wizard, but her cover is broken up. Morgan delivers a brutal sunset flip powerbomb from the apron, and Sky ambushes with a shotgun dropkick. Nox gives Sky a senton, but the Shiniest Wizard is blocked. Nox blocks Sky's moonsault, and reverses Bayley's throw onto the timekeeper's table. A mystery person kicks Nox in the head, and Sky finishes with a moonsault at 10:48. Lots of well executed high flying action and excitement here, but the finish was a downer, ***.
Winner and still WWE Women's Tag Team Champions: Damage CTRL

Ricochet video promo making his case against GUNTHER. He hangs out in Vegas and promises to do what he does best, which is FLIP! It's nice to hear Ricochet speak under ideal conditions, and this also serves as a rib against Braun Strowman, so win-win.

Let's take another look at Solo Sikoa putting Matt Riddle on the shelf with a positive drug test, er, Samoan Spike. Solo then tried to repeat the attack on Elias, but Kevin Owens interrupted. Looks like Raw happenings are part of Smackdown continuity again.

Sami Zayn wants to know the Usos' thoughts about his snazzy, new jacket. They tell Sami what he wants to hear. Sami wonders where Solo is, apparently he's hanging out with Roman Reigns. Sami waltzes off, leaving The Usos' to speculate what's going on in Roman's head.

Michael Cole shares "disturbing" footage of imposter Bray Wyatt standing reciting cryptic mumbo jumbo and forcing LA Knight to wear a stupid mask. This angle is heading further and further into trainwreck territory and I... kind of love it.

LA Knight comes to the ring to complain about Bray Wyatt. He BURIES Bray as a character, including Bray's gobbledy goop that never goes anywhere. The lights go out and emo Bray Wyatt appears with a mic, and the Chicago crowd is super jazzed to see him. Bray insists that he hasn't laid a hand on Knight yet, and he's sick of this game. Knight attacks Bray in the ropes and pummels him into the corner. Imposter Bray interrupts on the big screen and asks if Knight is ready to see something really scary. Mist fills the arena and Imposter Bray appears in the flesh on the set. The imposter lip syncs maniacal laughter playing over the PA system and Knight slips away. This is amazingly stupid, I LOVE IT for all the wrong reasons. The best part is that the segment ends with the 3 characters just reacting to each other, and I know when they come back from commercials, the show will just move on to something else with no explanation.

Roman Reigns (with Solo Sikoa and Paul Heyman) struts around backstage like royalty.

Allow me to take a moment to reminisce about the time I awkwardly bumped into Ricochet in a doorway at a live event in 2010. He was young and had long, ridiculous hair. We both did that thing where we apologized sheepishly, only I was a dorky fan and he was already a hyped indie star. I guess what I'm saying is I'm glad to see him in the biggest match on a WWE show in a sold out Chicago arena.

They lock up, GUNTHER gets a takedown and lifts Ricochet by a single leg. Ricochet slips away. Hip toss by GUNTHER, who concentrates on the arm. Ricochet FLIPS out of a wristlock, but GUNTHER tosses him by the legs. Ricochet lands some kicks to the leg and grabs a headlock. Ricochet FLIPS to block a German suplex and hits a somersault enziguri. GUNTHER boots Ricochet outside and hits a back suplex onto the ring frame! Back from commercials, Ricochet hits several body shots, but GUNTHER answers with chops and a brutal scoop slam. GUNTHER hits a hard Irish whip and locks on a Boston Crab. Ricochet fights out and GUNTHER actually sells his kicks. GUNTHER serves a brutal backbreaker and goes back to the Crab. Ricochet gets the ropes, but GUNTHER smashes his chest in and applies a Rear Naked Choke. Ricochet escapes and tries to lift up the champion, but GUNTHER throws him for a nearfall. Ricochet holds his own in a chopfest and hits a series of running attacks. GUNTHER reverses a suplex and nails a nasty dropkick. Ricochet counters a powerbomb and hits a missile dropkick from the apron. Ricochet hits an Asai moonsault to send us to break. They return with Ricochet hitting a slick dive to outside. GUNTHER tries an avalanche back suplex, but Ricochet lands on his feet! GUNTHER delivers a devastating big boot and lariat, but Ricochet kicks out! GUNTHER flies into Ricochet's boots and then finally gets hoisted into the air for a vertical suplex! Ricochet hits the Shooting Star Press, but GUNTHER KICKS OUT! Ricochet delivers a series of open hand chops, but GUNTHER kicks him down and nails a powerbomb, but RICOCHET KICKS OUT! GUNTHER blasts him with stiff shots and nails the Last Symphony to win at 21:28! This didn't quite reach the heights of Ricochet vs. Escobar, but still a grand match in it's own right, and a testament to the Triple H era working, ****½.
Winner and still Intercontinental Champion: GUNTHER

Imperium joins GUNTHER for the celebration, but then turn their attention to Ricochet. Braun Strowman ironically makes the save and Imperium retreat.

Jimmy Uso wants to know what Roman has planned for tonight, but the Tribal Chief isn't talking. Jimmy likes the idea of "Sami Uso" but he LOVES the Bloodline, which could be code for "Sami is getting killed tonight." Adam Pearce is summoned to the Bloodline's room. Paul Heyman asks Pearce to book Roman and Sami against Kevin Owens and any partner. Pearce suggests the match for the Royal Rumble, but Paul wants the match to happen on network television, so why not on the last Smackdown of 2022? Roman gives this the green light, because it won't be in Chicago. Cute.

Legado del Fantasma (Cruz Del Toro and Joaquin Wilde, with Santos Escobar and Zelina Vega) vs. Hit Row (Top Dolla and Ashante thee Adonis, with B-Fab) vs. Viking Raiders (Erik and Ivar, with Valhalla)
Ivar meets Wilde with a roundhouse kick. Ashante slips through Ivar's attacks and dropkicks him outside. Top Dolla clears everyone out, but Erik ambushes with a punch. LDF hit Erik with double missile dropkicks. Ashante dives onto the group outside and it's time for commercials at the 90 second mark. They return with Top Dolla dominating, at least until Erik kicks him in the gut. The Raiders take their turn to dominate. Wilde returns with a tornado DDT onto a Viking. Del Toro hits Top Dolla with a Phoenix Splash for 2. Adonis interrupts LDF's attack on Top Dolla, and the match breaks own with everyone hitting rapid fire drive-by attacks. Top Dolla unfortunately botches his running dive onto everyone. The women kill some time by neutralizing eachother's interference, until Zelina hits a dangerous moonsault. Meanwhile, Hit Row huff and puff on their way to planting LDF to win at 8:37. Rushed, sloppy, and largely lost in commercials, *.
Winners: Hit Row

Backstage interview with Raquel Rodriguez, who's icing her bad arm. Doctors don't want her in the ring, but she's ignoring their advice because Shayna Baszler has made things personal. She's ambushed by Baszler and Ronda Rousey, who further injure her arm.

The entire Bloodline faction make their way to the ring to a babyface reaction. They take their sweet time getting into the ring and once the music stops, the reaction becomes more mixed. Roman congratulates Bloodline for dominating at War Games. Roman addresses the Kevin Owens problem and insinuates that Sami Zayn bears some responsibility for it. Roman expects that he and Sami will smash Owens and his partner, and that'll be the last anyone sees of him. Sami accidentally slips that he's Kevin's only friend in a present tense sense. They're interrupted on the big screen by none other than John Cena, who just so happens to be making his return in 2 weeks. Cena has had a match in every calendar year since 2002 except for this year, so he's going to team up with Owens on the last Smackdown of 2022 against Bloodline. Cena Claus is coming to town. Roman grins, Sami looks worried.

Final Thoughts: This week was kind of a dud, save for the epic GUNTHER/Ricochet match. Next week looks like an easy skip with a women's gauntlet match and Hit Row getting a title shot. I'm getting far too much joy out of the Bray storyline slipping further and further into dumpster fire territory, but that's hardly worth a recommendation if you value your precious time.