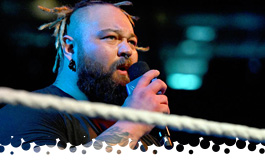 Live from Providence, Rhode Island. Our hosts are Michael Cole and Wade Barrett.

Show opens with Bayley and her War Games team in the ring. They call out their opponents, and Bianca Belair leads her troops to a confrontation. Bianca wastes no time introducing Becky Lynch as the fifth member of her team. A 5 on 5 brawl breaks out and the ring empties so Becky can hit Bayley with an Exploder suplex. Rhea Ripley wants a piece of Becky, but backs off, because she's a coward, or something.

Zelina Vega sits in on commentary while Escobar enjoys an early advantage. Butch hits a single knee to the gut to force Escobar to take a timeout. Escobar shoves Butch off the top rope for a messy landing. Back from commercials, Butch is enjoying a comeback. He hits a release German, stomps Escobar's fingers, and hits a roundhouse kick. Butch misses a moonsault and lands on other LDF members. Escobar sends Butch onto the announce table with a tope. Escobar tries a top rope attack, but Butch grabs the hair and snaps the fingers to knock him down! Butch takes out LDF with a top rope moonsault! Butch leaps into a tornado DDT for only 2! Meanwhile, the big screen reveals that Bloodline are beating up Drew McIntyre and Kevin Owens! The Brawling Brutes rush away to help, while Escobar plants Butch for 2. The backstage brawl continues, Zelina distracts the referee, and LDF blind Butch so Escobar can finish with the Phantom Driver at 9:15! Strong TV match, even if it fell off the rails with late shenanigans, **¾.
Winner: Santos Escobar

Bray Wyatt enters the arena to a nice reaction. If Emo Bray is flopping, nobody told these Rhode Island fans. Bray thinks that most people look at him like a rabid animal and just want to see him as a monster. He doesn't want to be that man anymore (booo!) and claims he's not responsible for the attack on LA Knight. He's interrupted by a spooky video on the big screen full of vintage clips of his antics.

Meanwhile, LA Knight is sporting an injured arm. He wasn't able to enjoy Thanksgiving, because he was attacked by a human trash bag liar (Bray). If he was healthy, he'd do something about it (yeah!). This is about 1,000 times better than what he was doing with the Maximum Male Models.

Hit Row (Ashante three Adonis and Top Dolla, with B-Fab) vs. The Viking Raiders (Erik and Ivar, with Valhalla)

Okay, fine, I'll call Viking Raiders by their stupid Vince-given names since they don't seem to be going anywhere. WWE's costume department stepped up their game for the Vikings this week, they look legit, I guess they were shamed after Sarah Logan showed up looking like a poor man's Max the Impaler last week. Ashante tries to take the fight to Ivar and hits a glancing dropkick before Ivar knocks him over. Erik helps with a relentless clubbing attack on Ashante. Top Dolla tags in and scores some shots on Erik to mild crowd approval. Ivar dumps Top Dolla out, Ashante tweaks his knee on a missed flying attack. The Raiders finish Adonis with Ragnarok at 2:47! This was my kind of squash.
Winners: The Viking Raiders

Video recap of spoiled, entitled, punk kid Dominik Mysterio crashing the Mysterio family Thanksgiving gathering to beat up Papa Rey. Did you know that Rey wears his mask at home? That's pretty funny. What's no so funny is the entire Mysterio family standing by and doing nothing while Dom attacks Rey's injured foot with a pool stick.

The TV reason this match is happening is because it's part of the World Cup tournament. The real reason it's happening is because Bruan ran his mouth on Twitter about how he and Omos had a five star match in Saudi Arabia which proved their superiority over flippy floppy wrestlers. Cole even brings up Bruan's Tweets on commentary. Ricochet springboards into Braun's arms, but escapes for a flurry of quick attacks. Ricochet hits a missile dropkick from the apron to send Braun into the barricade, but Bruan then pounces Ricochet over the announce table! Braun slows things down to work Ricochet over with lumbering offense. GUNTHER shows up to distract Braun while Imperium attempt interference. Ricochet capitalizes with a crucifix pin to win at 3:47! Well, Triple H went out of his way to protect Braun in this loss, but this still feels like a punishment, since the entire purpose of this World Cup seemed to be to set up Braun for GUNTHER. Decent short match, *½.
Winner: Ricochet

Ricochet feels bad for dumb ol' Braun and tries to help against Imperium, but he gets beaten up too. That's still more than any member of the Mysterio family did for poor Rey on Thanksgiving. Braun manages to get back up and Imperium backs off. Braun learns that little guys are people too and helps Ricochet up.

Honorary Uce Sami Zayn is approached by old frenemy, Kevin Owens. Sami doesn't want to be seen with Kevin and tries to dismiss him. Jey Uso listens in as Kevin wonders out-loud what will happen when Sami does something to piss off the Bloodline. If it were Kevin, he would turn on Bloodline first, but anyway, he'll see Sami at Survivor Series. Kevin departs, and Jey demands to know where Sami has been all evening. Sami denies talking to anyone and enters the Bloodline dressing room. Hopefully, no one in Bloodline has DVR, otherwise Sami is busted.

Kayla Braxton ambushes Becky Lynch for an interview and wants to know if a brutal match like War Games is good for her return. Becky isn't afraid, everyone wants to go to war until The Man comes around.

Backstage interview with Shotzi Blackheart and Raquel Rodriguez is interrupted by a sneak attack from Shayna Baszler and Ronda Rousey. They crush Raquel's arm in a production box, and it looks like she won't be able to compete tonight.

Smackdown Women's Champion Ronda Rousey and Shayna Baszler happily come to the ring. The crowd boos them while they smirk about getting out of their scheduled match. Shotzi Blackheart comes marching out for a fight.

Shotzi looks for a quick win and splashes Ronda against the ropes. Shayna strikes the head to restore order. The beatdown is interrupted by the arrival of wounded Raquel Rodriguez, who joins the match for a hot tag. Ronda blind tags in and the distraction lets Shayna stomp Raquel's bad arm. Ronda easily finishes with an armbreaker at 3:28. Well, this was far more interesting than a straight up squash match, so that's something, *.
Winners: Ronda Rousey and Shayna Baszler

Kayla Braxton asks Shotzi about Raquel's health. Shotzi reports that Raquel has suffered a broken elbow and dislocated shoulder. She knows that Ronda and Shayna are bullies and she's prepared to go at them alone. Shotzi won't forget the way Raquel stood up for her, so she's going to tear Ronda apart.

The winners earn the advantage for their team in the War Games match at Survivor Series. Sheamus starts with some headlock takedowns on Jimmy. Drew and Sheamus make quick tags to keep Jimmy off his game. They clotheslines an interfering Jey over the ropes and both teams have a standoff to send us to commercials. They return with Sheamus getting beaten up on the floor by Bloodline, with the Brutes apparently unable to do anything about it. Sheamus answers with a tilt-a-whirl power slam on Jimmy. Drew gets the hot tag and runs wild through Jimmy. Drew's spinebuster gets 2. Neckbreaker by Drew, who stops to stare down Sikoa, before signaling the Claymore. Jey interrupts and takes McIntyre out with a dive. Bloodline thrust Drew into the steps to set up another commercial break. They return with Drew running into Jimmy's boot. Aaaaand my DVR cuts out at 11:22. I guess it got preempted by football. I try to watch a backup recording from FS1, but it's last week's show. Ah well, I think we can assume that Bloodline was going to win because they couldn't possibly do a War Games match without giving the advantage to the heels, right? Felt like a *** filler main event.

Final Thoughts: Nothing offensively bad, but also nothing you needed to see. The table was already pretty well set for Survivor Series ahead of time. I might be underplaying how important Becky Lynch's return is, but I haven't been that invested in her since the ill-advised heel turn at Summerslam 2021. I know things are different now, but terrible booking decisions do matter. Anyways, this didn't sway me to want to watch Survivor Series, which is taking place 90 minutes from my house, so that must mean this is a mild thumbs down.