Here's a Thanksgiving Smackdown I haven't seen in a while! Pour yourself some gravy and kick back for some Thanksgivin' Thumpin' goodness, from the glorious year that was 2000.

From Ft. Lauderdale, Florida. Our hosts are Michael Cole and Jerry Lawler

Eddie has a bone to pick with "Goldilocks" after he stooged him out to Triple-cita, Chyna, and meets Gunn in the aisle for a brawl. Billy uses his size advantage to score a shoulder block and back body drop. They collide on dual shoulder blocks. Eddie grabs the IC belt, but Gunn shoves him off into the ref. Eddie hits a DDT but the ref is busy removing the title. Frog splash by Eddie gets 2. Gunn answers with a power slam for a 2 count that the live crowd simply devoured. Jackhammer by Gunn and the Fame-asser, but Eddie kicks out! Gunn tries another Fame-asser but Eddie throws him over the ropes. Gunn then blocks a flying axe handle and hits an inverted DDT to win at 4:37! Crowd is THRILLED with this result. Eddie was more or less wrestling himself, but this was all action with zero downtime, **½.
Winner and new Intercontinental Champion: Billy Gunn

Mick Foley, dressed as a pilgrim, chats with Debra, dressed as a Native American, in catering. Foley is looking forward to an old fashioned feast. Jim Ross brings them turkey breasts for a subtle jab at Debra's cleavage. 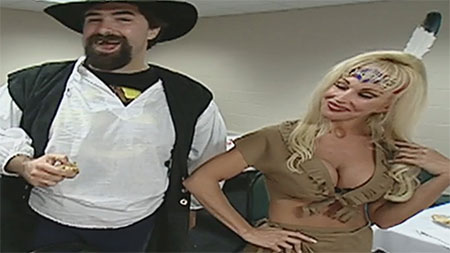 Eddie Guerrero storms through the back.

European Champion William Regal comes to the ring to annoy the fans. Regal doesn't like the "USA" chants and explains why Thanksgiving represents everything wrong with America. He trashes the holiday as just a bunch of overweight dysfunctional families sitting around eating too much and watching bloated floats on TV. Crowd rewards him with "a-hole" chants. Regal goes on to give unwanted table manners advice when he's interrupted by The Rock, who gets a monster ovation. Rock intentionally misunderstands Regal's speech and call hims something rude that gets bleeped. Regal doesn't like it when Rock "besmirches" his words. Well, IT DOESN'T MATTER IF YOU'RE FEELING BESMIRCHED, and Rock sets the record straight with a more populist description of Thanksgiving. Rock thinks the fans would be thankful if he walked down to the ring and kicked Regal's lilly bottom. Rock challenges Regal to a match later, which will be followed by him shoving a drumstick up Regal's @ss.

Foley and Debra talk about spending time with families over the holidays and are interrupted by Al Snow, offering up some bean salad. Foley dismisses him, as while he loves a White Christmas, he hates Snow on Thanksgiving.

Back from commercial, Foley and Debra are joined by The Kat, who offers up some beef jerky. Foley is impressed by Kat's "attractive dish." The writers were working overtime on these segments.

Crowd seems a bit anxious over the lack of Trish Stratus, but still react to Holly's dropkick on Albert. Albert has better luck with a press slam into a facebuster on Crash. Holly saves his little cousin with a weight belt. Albert misses a head of steam and runs into the ring post. Holly saves Crash from Test with a kendo stick. Holly kicks the nether region of Test, but Albert press slams him onto the ropes. Crash wacks Test with a lid and hits a tornado DDT that misses the same lid. Hurricanrana by Crash gets 2 on Test. Crash dropkicks a chair into Test's head for another 2. Meanwhile, Albert sprays an extinguisher at Hardcore. Albert smashes a can into Crash and serves him up for Test's big boot and the pin at 3:43. They just left it all out there for 4 minutes, **.
Winners: T&A

Meanwhile, Foley and Debra's potluck party is heating up when Too Cool arrive with some taco salad. Foley gets carried away dancing, so Debra calls him out for trying to be hip.

Val Venis (with Steven Richards) vs. K-Kwik (with Road Dogg)

Richards is still limping from having been put through a table by the Dudleyz on Raw. Venis is too mad to wish the fans a Happy Thanksgiving because he's so disgusted that they spending the holiday at a sick, perverse, program like Raw. Cue K-Kwik and Road Dogg's cringeworthy performance of "Rowdy." Venis isn't a fan of hip hop music and stomps Kwik into the corner. Kwik cartwheels to safety and delivers a hurricanrana. Kwik hits a dangerous dive, but Venis then throws him into the barricade. Kwik rallies with lots of punching and a back body drop. Venis gets caught using the ropes in a cover, and Kwik school boys him for 2. Spinebuster by Venis, but Kwik counters into a super rana! Bull Buchanan and Goodfather run in to attack Road Dogg. Richards sneaks in to DDT Kwik, and Val easily wins at 4:00. Not a terribly interesting match or angle, but too short to offend, *¾.
Winner: Val Venis

The Dudley Boyz liven the party with a WASSUP, which was already a tired reference in 2000.

Video recap of Kurt Angle avoiding the "annual Survivor Series screwjob" when he brought in his brother Eric to serve as a decoy in his title defense against Undertaker. This didn't sit well with the Dead Man, so he chokeslammed Kurt off the stage and through a table on Raw.

WWF Champion Kurt Angle comes to the ring in a neck brace. Kurt accuses Undertaker of not accepting that he lost to a better man, so how dare he take it on his poor brother. Therefore, Undertaker, if that's his real name, is the official Sore Loser of the Year. Unlike Undertaker, Kurt loves his brother, and would never set his face on fire and force him to wear a scary mask for his entire life. Undertaker must be jealous of Angle, because where are his gold medals? Undertaker has finally heard enough and marches down to the ring to a great ovation. Taker punches Kurt off his feet, but he's then ambushed by Edge and Christian. Kurt assists in a 3 on 1 beatdown. Kurt goes too far with a slap to the face, which fires Undertaker up enough to clear the ring.

During the break, Edge, Christian, and Kurt are pleased with themselves but still bravely flee the building.

Rock intensely takes the fight to Regal at the opening bell with punching and clotheslines. Rikishi quickly arrives on the stage, and Regal takes advantage with a clothesline from behind, but Rock easily dumps him to ringside. Regal reverses an Irish whip into the ring post and directs the brawl into the crowd. Regal misses a chair shot, but smashes Rock's face into the announce table. Back to the ring, Regal ducks a clothesline and hits a back suplex. Regal hits a KO punch to the skull for 2. Rock comes back with a DDT and armdrag. Regal snaps Rock down by the wrist and uses the ropes for a 2 count. Corkscrew leg sweep by Rock, and the Sharpshooter finishes at 4:30! Good TV match, they did just enough to make Rock look like he was in trouble before having the Great One storm back for a dominant victory, **½.
Winner: The Rock

Regal gloats that he's still European Champion, so Rock naturally puts him down with a Rock Bottom.

Back to the party, Funaki sits with the Dudleyz for some more WASSUP. Mideon offers some soup, and Foley is worried that he sweat in it. Scotty 2 Hotty thinks this is funny.

Tazz is mad about Raven's recent betrayal and knocks him off the apron. Tazz chokes Raven with his own flannel jacket. Tazz rakes the eyes and snaps Raven's head to the canvas. Tazz absorbs some punches and hits backdrop suplex. Raven comes back with a bulldog, but Tazz answers with an overhead suplex. Raven no-sells and hits the DDT for the win at 2:25. This was just a bunch of noise, *.
Winner: Raven

The Thanksgiving party rages on backstage. Debra has to go because she has pies in the oven. Foley thanks the Dudleyz for coming, and they offer up some Dudleyville Dumplings. Foley is glad to see them sitting a table instead of putting someone through one, which tempts them to put Funaki through it. Foley calms them down and fails to pop the room with "GET THE DUMPLINGS!"

Trish goes right for the wrist, but Molly counters into an armbar. Molly grabs the hair to smash Trish' head into the mat, but Trish pulls the ropes to send Molly crashing to ringside. Trish gets mean by slamming Molly around ringside furniture. Back to the ring, Trish hits a suplex for 2. Trish chokes in the turnbuckles before hitting a leaping bulldog. Molly counters with a slam off the buckles and Northern Lights suplex for 2. Trish is flustered and Molly blocks a superplex and hits the Molly Go Round to win at 3:03. Not bad, considering Trish' inexperience, *½.
Winner: Molly Holly

Debra wants to know if anyone would like to have a peace of her pie, and everyone in the room takes the double entendre literally, especially Funaki, who gets a round of high fives. 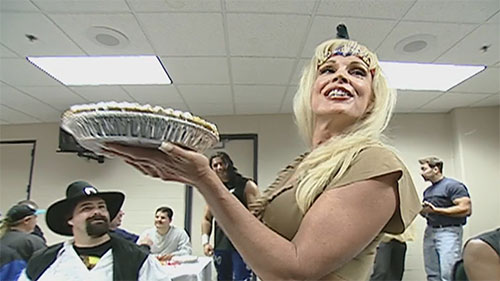 Tiger Ali Singh and Lo Down crash the Thanksgiving Party, and are upset they didn't get an invitation after all their lofty accomplishments. Singh tosses away Debra's pie, right into Steve Blackman's face, which leads to the Lethal Weapon destroying Lo Down with weapons, and the Dudleyz putting Singh through a table. Cue the obligatory food fight, and the guys look like they're having so much fun, it's hard to dislike it. Debra throws a pie into Foley's face for good measure.

Kane and Chris Benoit vs. Chris Jericho and Steve Austin

Jericho starts against archrival Benoit, even though Kane still wants to maim him for spilling coffee weeks ago. Quick tag to Austin, who is universally adored by the fans, but Benoit scores first with aggressive shots. Austin counters out of Benoit's headlock, but seems to acknowledge that he underestimated him. Austin fires back with a spinebuster for 2. Kane tags himself in and grounds Austin with an uppercut Austin blocks a big boot and goes to work on Kane's leg with elbow drops. Kane breaks an armar by kicking the head, but Austin fires back with a Thesz press. Jericho gets an eager tag, but Kane unloads on him. Jericho dropkicks the leg, but Kane kicks him through the ropes. Kane and Benoit get their heat on Jericho. The ref didn't see Jericho's tag, and Austin loses his temper and drops the ref with a stunner. Austin stuns Kane, serving him up for Jericho's lionsault. The match just ends at 7:50. This was an average house show main event, helped out tremendously by a red hot crowd, **.
No Contest

Final Thoughts: This was actually a pretty mundane Smackdown, but with the stars being as over as they were and the fans being rapid throughout, you can get away with it. I didn't find the Thanksgiving Party segments to be charming or campy enough to warrant you go out of your way to experience them. Smackdown's Thanksgiving 2000 is a mild turkey.