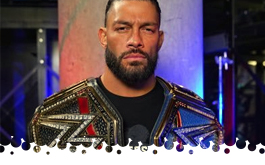 Live from Indianapolis, Indiana. Our hosts are Michael Cole and Wade Barrett.

Yeah, yeah, yeah, this match again, but this time the longest tag team reign in WWE history is on the line, so I'll give them a pass. Jey is sporting a bandaged arm but still gives Woods a shoulder block. Kofi tags and immediately hits a high crossbody. Jimmy grounds Kofi with a headlock. New Day recover and put Jimmy through the Unicorn Stomp. New Day clears the ring and Kofi hits a top rope trust fall! Back from commercials, the Usos are working Kofi over with a tandem dive into the barricade. Sadly, the fans are chanting "We want Sami" instead of investing in Kofi's peril. They do care enough to boo loudly when the Usos pull Woods from the apron to prevent a hot tag and hit a back suplex for 2. Back from more commercials, Kofi dramatically fights out of Uso territory and makes the hot tag. The crowd pops while Woods cleans house. Woods hits Jimmy with a gutbuster for a hot nearfall. New Day double team Jimmy, Woods' frog splash sets Kofi up for another great nearfall. Boom drop by Kofi and then an SOS but Jey kicks out! Fans chant "This is awesome!" Jey hits an enziguri before dumping Kofi, but Xavier helps with a headbutt. The Usos throw a SUPERKICK PARTAY! The Usos hit Xavier with the Double Splash but WOODS KICKS OUT! New Day hit Jey with the Midnight Hour outside, Woods DDT's Jimmy inside, and drapes Kofi for the Midnight Hour! Jimmy breaks the nearfall! The crowd gives them a standing ovation as the match restarts with a 2 on 2 brawl. Kofi fights off a double superplex, but flies into a 1D and gets pinned at 23:56! This turned into something special with fantastic false finishes, high stakes, and the fans playing along when it mattered most, ****¼
Winners and still WWE Undisputed Tag Team Champions: The Usos

The Usos jubilantly enter the Bloodline's lair, but Roman Reigns doesn't seem that happy to see them. Roman says this is what being the greatest feels like, and gives them an unemotional congratulations. He still needs them at his side for what comes next.

We get a glimpse at the shiny new Smackdown World Cup trophy.

This is framed as Japan vs. Mexico, and they even plug Nakamura's upcoming match against Great Muta in Japan. Escobar gets a hot start, but Nakamura kicks him out of the ring. I'm distracted by Nakamura's strange bright yellow jumpsuit, but he throws Escobar into the barricade and poses in the ring. Back from commercials, Escobar is going to work on Nak's knee. Nakaura tries to knock some feeling back into his leg, and manages a sliding German suplex for 2. They slug it out before Escobar dropkicks the bad knee for 2. Nakamura answers with a flying knee for a flat nearfall. Nakamura counters into a belly to back suplex, but has to stop to knock LDF cronies off the apron. Nakamura signals Kinshasa, but LDF pulls Escobar from the ring. Nakamura valiantly fights off outside interference, but Escobar catches him with an avalanche Falcon Arrow and wins at 8:22. Generic match full of shenanigans, but they worked hard, **¼.
Winner: Santos Escobar

Veterans Day video package. May I add my own personal thanks to anyone who has served? I can't imagine how much courage it takes to serve.

They're now advertising a "Roman Reigns Special Moment" for the main event. Take that for what it's worth.

Backstage interview with LA Knight, who's offended about being left out of the Smackdown World Cup. The TV behind him starts flickering Bray Wyatt nonsense, and then Bray arrives in the flesh. Bray recognizes the anger and rage brewing inside of Knight, because that same sort of thing has made a monster out of him. Knight brushes Bray's words away, so he eats a headbutt for his trouble.

Match starts with a chaotic brawl. Raquel takes Li outside to pummel her against furniture. Evans catches Shotzi with a Women's Right, but Sonya breaks the nearfall with a running knee. Morgan jumps Sonya, waves hello, and throws her outside. Liv reverses a throw into the steps. Meanwhile, Rodriguez misses a head of steam into the ring post. Liv pushes the steps over to the announce table, but takes a drop toe hold into the steel. Elsewhere, Li drags Shotzi into place for a top rope attack, but Raquel interrupts. They tease a Tower of Doom before Raquel hits an avalanche vertical suplex! Sonya is the only woman standing heading into the break. They return with Shotzi escaping Li's chinlock. Li knocks her down, hits an amusing spin kick to the spin, but Lacey breaks the cover. Li lights Evans up with kicks and hits an overhead throw for 2. LIv interrupts with a missile dropkick and splashes Shotzi and Evans in opposite corners. Raquel returns but eats Liv's DDT. Sonya returns to toss Liv and cover Raquel, but Sonya breaks the pin. Shotzi pops up for a swinging neckbreaker, the ring clears for Raquel to powerbomb Li, but Sonya steals the pin attempt. Raquel drags Sonya out and prepares to powerbomb her through a table, but Liv interrupts with a clunky crossbody. Meanwhile, Shotzi dukes it out with Evans until she hits a DDT to win at 11:35! Really fun match until the awkward finish, it seems like Liv and Raquel botched the table spot (upon watching a replay on Twitter, Liv definitely botched the table spot), **¾.
Winner: Shotzi Blackheart

Shotzi celebrates backstage with Emma. Shotzi thinks Emma is crushing on Madcap Moss, but Emma denies it like a 12-year old on the playground. Shayna Baszler shows up as a surrogate for Ronda Rousey, who will destroy Shotzi in their eventual match. Shotzi claims she's ready for whatever Ronda has in store for her, but turns around to find Ronda in the flesh. Shayna ambushes Shotzi and chokes her out, and it looks like we have our obvious match to set up Survivor Series.

Kayla Braxton is standing by with The One and Only Ricochet. He's drawn Mustafa Ali in the Smackdown World Cup. Ricochet thinks this tournament is a chance for him to earn some vague thing that is his. Imperium interrupt with the same questions as me. Gunther would love to beat Ricochet again.

Video recap of Braun Strowman vs. Omos at Crown Jewel. This was a ***** match if you ask Braun. Luckily for us, Braun will represent the USA in the Smackdown World Cup NEXT!!!

Former WWE Champion Jinder Mahal is randomly back with a mic in hand. He thinks himself to be the greatest WWE Champion of all time and he's beginning his ascent to his rightful spot as Intercontinental Champion.

After Braun's recent antics on social media, I despise him with all my being, but I still hope he squashes Jinder like a bug. Jinder ambushes Braun while he plays to the crowd but gets pulled away by the ref. Jinder dropkicks the knee and hits a running knee lift for 1. Jinder runs into Braun's ugly and confusing shoulder-tackle-like thing. Braun builds some quick steam and plows into Jinder at ringside (no train sound effects this time). Braun finishes with a powerbomb at 2:03. Everything about this sucks, but it was quick, and now we're on to something else, DUD.
Winner: Braun Strowman

Before anything can happen, the Viking Raiders and Sarah Logan show up. The Raiders attack Hit Row while Sarah drops B-Fab. The Raiders turn their attention to Legado del Fantasma too and lay waste to anyone in their way. Ivar kills Ashante with a flying splash. The Raiders then slay top Dolla with a tandem powerbomb. Sarah drags B-Fab in for a pop-up headbutt. The Raiders stand tall and it looks like there's a new force in the tag team division. This is all very silly, but it signals a gigantic upgrade for the tag team division.

Undisputed WWE Universal Champion” (minus Sami Zayn) come to the ring for the main event talking segment. Roman demands that Indiapanolis acknowledge him, and of course, they totally do. Paul Heyman calls Indianapolis a "hellhole" and tells the fans they aren't very "Ucey" for booing him. Roman's trash talk is interrupted by the Brawlin' Brutes of Ridge Holland and Butch. This is FIGHT NOW and they have Sheamus in tow. Sheamus declares tonight to be the beginning of the end of Bloodline. The Brutes rush the ring for a brawl. The Bloodline seem to gain the upper hand when Drew McIntyre arrive to level the playing field. Drew brawls with Solo Sikoa, but Roman catches him with a big boot. Sheamus attacks Roman from behind, but everyone gets up to resume a chaotic brawl. The show fades to black with Drew and the Brutes gaining control.

Final Thoughts: I'm a little scared to admit that I still think Smackdown in November 2022 is a great show. You should give it a fresh look if you haven't.