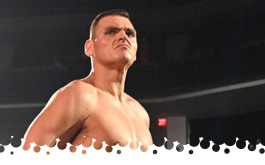 Taped in St. Louis, Missouri. Our hosts are Michael Cole and Wade Barrett.

After weeks of getting ambushed by Liv, Sonya starts hot and goes for a kendo stick. Morgan cuts her off with a Meteora off the steps. They battle for control of the kendo stick until Sonya unloads with a series of blows. Liv bravely escapes a kendo-assisted crossface and returns fire. Liv goes for a table, but Sonya hits a baseball slide dropkick. Liv answers with a DDT in the ropes, followed by a messy tope. Sonya flees but Liv catches her with an equally messy tope. Liv sets up a table, which gives Sonya an opening. Sonya tries a German off the apron, Liv holds on before deciding it would be better to let go and control the bump! They take a crash landing to send us to commercials. They return with Liv escaping a chinlock. Sonya hits a flying knee for 2. Sonya fills the ring with chairs, but Liv interrupts with an enziguri. Liv rallies and hits a springboard codebreaker for 2. Liv tries a superplex, but Sonya reverses with a powerbomb onto the chairs! Fans chant “This is awesome!” Liv makes another comeback and hits ObLIVion into the chairs to win at 13:50. Overall, a very average WWE weapons match with many familiar story beats. Liv doesn't really do anything well enough in the ring to justify this kind of character or push, but she's trying, **½.
Winner: Liv Morgan

Megan Morant interviews Emma backstage. She's in good spirits after getting her butt kicked by Ronda because returning to WWE feels soooo good. Xia Li interrupts with some sarcastic clapping, and why yes, she would make a good jobber for Emma, wouldn't she? Li teases Emma for looking weak, so Emma knocks her down.

Footage from Logan Paul's day job program. He sits around with his brother and other D-bags and invites them to Crown Jewel to back him up against Roman Reigns.

The Viking campfire continues with (Sarah Logan) applying warpaint to the Raiders.

The Exhilarating Highlight of the Night Ricochet vs. LA Knight

Ricochet chuckles his way through a painfully over-scripted promo about how LA Knight won't be able to talk after he knocks out some teeth. Knight goes full heel on his way to the ring and picks on the ring announcer for screwing up his hometown. Ricochet interrupts his rant with a tope. Ricochet hauls Knight to the ring and looks for a quick win with an elbow drop. Knight comes back with punchy/kicky offense. Ricochet answers with a headscissors takedown and dropkick. Knight hangs Ricochet on the top rope, then misses a springboard moonsault. Ricochet fakes a dive. Back from commercials, Knight is back in the driver's seat. Knight wrestles like a 2005 OVW wrestler, only better. Ricochet makes his obligatory comeback, but Knight cuts him off with a neckbreaker. Knight gets carried away showboating and Ricochet hits a leaping avalanche rana for 2! Ricochet rallies and hits a springboard clothesline and running SSP for 2! Knight grabs the tights to reverse a rollup and win at 10:07! This was about the best version of the WWE formula match you could ever see, ***.
Winner: LA Knight

Sami Zayn pumps up The Usos while Solo Sikoa stands by. The Usos are about to become the longest reigning Tag Team champions in WWE history, but Sami reminds Jey to keep his emotions in check. Jey argues that they were champions before Sami, so they don't really need to listen to him. Jimmy agrees, and they leave Sami looking crestfallen.

Bray Wyatt broods backstage, complete with mood lighting and dramatic sound effects. He's interrupted by a production worker and rants about how he hates himself for going crazy again (mostly meaningless gibberish). This is setting up some kind of non-wrestling segment for Crown Jewel, where I expect he'll continue feuding with himself.

Undisputed WWE Tag Team Champions Jimmy and Jey Uso come to the ring for some talking. If they can get past the Brawlin' Brutes tomorrow at Crown Jewel, they're almost certain to break the Tag Team Championship record. Fans entertain themselves with "Ucey" chants. They're interrupted by The New Day, who hold the current record for the longest reign. Kofi Kingston admits they're rooting for the Brawlin' Brutes to beat the Usos. But, if the Usos are still champions after Crown Jewel, they'll have the New Day waiting for them, as they want to protect their record. The Brutes jump the Usos from behind and the New Day heroically join in on the beatdown. Sami Zayn and Solo Sikoa run in for the save, and I sense an 8-man tag for after the break. Maybe not, Bloodline end up standing tall.

Kayla Braxton interviews Rey Mysterio backstage. Rey loves competing in WWE, but he's haunted by memories of his evil son, Dominic. He's going to win the Intercontinental title to show his son that you don't give up.

They lock up, Natalya scores a side headlock takedown. Shoulder tackle by Natalya, Shayna counters with an elbow attack, they trade counters until Shayna stomps Nattie into the buckles. Shayna targets the elbow again with a stomp. Natalya comes back with scrappy offense. Discus clothesline by Natalya gets 2. Shayna blocks the Sharpshooter and wrenches in a choke hold to win at 4:11. I'm totally okay with *½ TV-friendly matches that don't extend through commercials.
Winner: Shayna Baszler

Ronda doesn't think Natalya has suffered enough and talks Shayna into pulling down her knee pad before kneeing her in the face.

MVP is in the ring on behalf of Omos to badmouth Braun Strowman. MVP brings out a group of jobbers to back him up. Braun arrives and knocks them all down like bowling pins. MVP swings his cane but Braun blocks and sends him into the guard rails. Braun finishes MVP with a trio of power slams. This was fine build to a match I will gladly never watch. The fans love this anyway.

Kayla Braxton talks to Intercontinental Champion GUNTHER and Imperium backstage. Gunther will defend his title with dignity, respect, and honor. Rey has no honor, which is why his son turned his back on him. Gunther vows victory and Kayla looks disturbed.

Legado Del Fantasma video promo. Santos Escobar enjoys a cigar while the group hang out in their finest outfits. Zelina Vega puts over their growing empire, which cannot be stopped. Didn't they lose to a makeshift team last week, or did I imagine that? Wins and losses still don't matter much in Papa H's WWE.

This match could end up being VERY good, and I'm a little sick of myself for feeling nostalgic for mid-00's Smackdown over Rey being here. GUNTHER towers over Rey, who doesn't back down, and uses his speed to avoid getting cornered. GUNTHER chops him onto the buckles anyway and stretches him with a boot to the face. Back from commercials, They return with GUNTHER sliding Rey to outside and then hitting a powerbomb onto the ring frame! Rey beats the countout, but GUNTHER is waiting for a power slam. GUNTHER hits a second slam, but Rey dramatically reverses a third slam into a crucifix bomb! Rey makes a desperate comeback, but GUNTER reverses a headlock into a snapmare. Rey goes for the sleeper and gets GUNTHER off his feet. GUNTHER climbs up the ropes to slam Mysterio out of the sleeper! Back from MORE commercials, Back again, GUNTHER snaps Rey's neck with his heels. GUNTHER starts messing with Rey's mask, which inspires another Mysterio comeback. Rey reverses a powerbomb into a seated senton. Slingshot bulldog by Rey, followed by a flying seated senton! Rey's bulldog only gets 2! Rey hits 619, but GUNTHER avoids the Frog Splash with a press slam! GUNTHER climbs the ropes, Mysterio tries an avalanche rana, but counters GUNTHER's rana for a GREAT nearfall! Fans chant “This is awesome!” Rey tries a flying rana, GUNTHER counters, so Rey counters back with a Sunset Flip powerbomb for another great 2 count! Rey summons some help from Eddie Guerrero, but misses a frog splash! GUNTHER nails a shotgun dropkick, then a powerbomb, but REY KICKS OUT! They angrily trade stiff shots and Rey tries another 619, but runs into a big boot! GUNTHER hits one mean clothesline to win at 18:22! What a match! These two have stellar chemistry together. Rey's loss feels heartbreaking, ****¼.
Winner and still Intercontinental Champion: GUNTHER

Final Thoughts: There was nothing bad on this show, but it kind of dragged until that epic main event arrived. I'm in such a good mood from seeing a classic Rey Mysterio match in 2022, that I recommend you sit down and watch this. I'm worried I'll be nostalgic for this era of Smackdown in another 15 years or so.