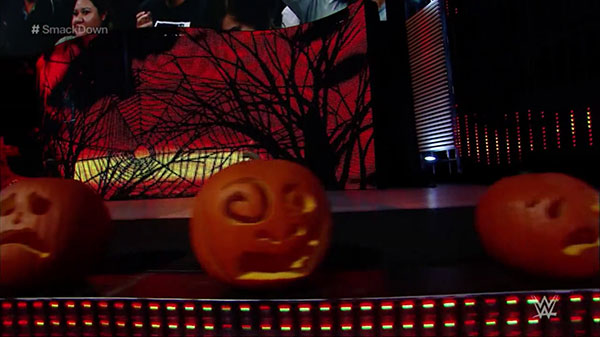 For once, the show has a full-on Halloween treatment, with jack-o-lantern on-screen graphics, stage props and a orange-theme to the arena LED boards. The "blue brand" could be called the "orange brand" for this episode *rimshot*... hey-oh! We open with a recap of Hell in a Cell, where the Wyatt Family came out to attack the Undertaker. Bonus flashback-- we also get scenes from RAW, where the Wyatts attacked and carried off Kane. Now here's a "live" promo from the entire Wyatt Family (Bray Wyatt, Erick Rowan, Luke Harper and Braun Strowman). Wyatt throws out a "Face the Fear™" challenge for 3 guys to meet them in a match, tonight. Wyatt continues that he now owns the "souls" of both Kane and the Undertaker, via their hat and mask, respectively. Rowan says he wasn't allowed to dress up for Halloween, since it was "sinful". Harper adds that they're not wearing costumes. Strowman concludes by saying "evil is real". Spooky! DIT! But with so much going on in World Wrestling Entertainment, let's get down to ringside for...

Our hosts are Rich Brennan, Jerry Lawler and Booker T. Reigns comes in through the audience, then talks about how he beat Kevin Owens, on RAW, to become the new #1 contender to Seth Rollins and the WWE World Championship (snif snif...there's a Sting lament in here, but my therapist says I'm better off not thinking about it). That brings Owens, the Intercontinental Champion, out to complain about his loss and that he almost had Reigns beat with the pop-up powerbomb. Reigns invites him into the ring for a rematch. Forget about the bookers and scheduling--and who the hell needs an on-screen General Manager?--- because we've got...

You know it's a spontaneous match-up, because WWE immediately cues up a "#ReignsvsOwens" hashtag on the screen. They trade basic blows, until Reigns floors Owens with a shouler-tackle. Series of a kicks and a swinging neckbreaker from Reigns. Owens catches him with a hangman on the ropes, then shoves him out to ringside. Owens tosses him into the ring barrier, then follows up with a fallaway slam into some more barrier. Owens rolls Reigns back in for a series of 2 counts, stomps away and gloats to the crowd. Reigns off the ropes with a big kick for 2. Powerbomb attempt from Reigns gets turned into a backdrop and a super-kick from Owens for another 2. Reigns stops a cannonball attempt with a flying clothesline for 2. Reigns Punches the Mat to telegraph his moves, so Owens smartly rolls out to ringside and tries to take a hike. Reigns tosses him back in, but Owens counters with a German suplex for 2! They fight over a second attempt, and Reigns fireman carries Owens to the top turnbuckle. They grapple over setting up a super-plex or an avalanche driver, until Reigns knocks Owens to the floor with an Earth-Prime Superman Punch. Owens takes a powder, grabs his Intercontinental Championship, and leaves through the crowd, allowing Reigns to win by count-out. Went off like a hot opener, but deliberate count-out decisions always leave a crowd unfulfilled. I guess Owens basically said: "screw it. I'm the IC champ...don't need this. Buh-bye". The match had its moments and reminded me, a little, of why I absolutely dug Owens in 2015.

Backstage Renee Young is sporting her Halloween costume-- Tinkerbell, the Tooth Fairy, the mascot from Fractured Fairy Tales, or a random fairy-- take your pick. She brings in Dean Ambrose, who accepts Bray Wyatt's challenge for later tonight, since he slays dragons, smashes zombies and destroys monsters n' such. Ambrose doesn't know who else will join his "Ghostbustin' Monster Squad". Bo Dallas then walks in, in a basic ghost costume and calls himself "Boo Dallas". "Someone is getting scared tonight, and all you have to do is Boo-lieve". 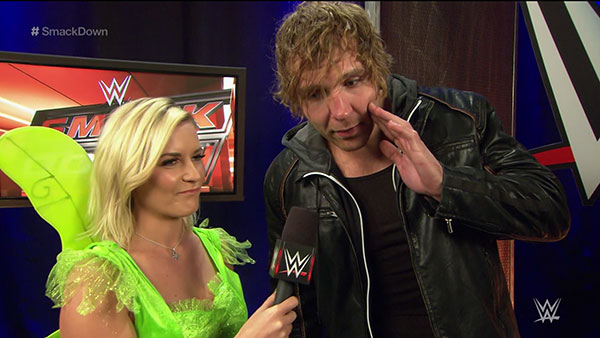 Hey, remember when SHEAMUS was "Mr. Money in the Bank"? Tag team champs, the New Day (Big E & Kofi Kingston) crash the party, saying that nobody believes in Halloween, since there's "no horns, no costumes, no candies", before joing the commentary team. Kalisto does some duck n' dodge with Sheamus, then takes him down with a tilt-o-whirl 'rana and a springboard elbow. Tag out to Bubba Ray Dudley, who brawls with Barrett. Both Lucha Dragons go to the top rope to hit the Ascension with drop-kicks. Things settle down as D-Von hits Barrett with a vertical suplex for 2. Kalisto tries to fly in, but Viktor knocks him off the top turnbuckle. Slam suplex from Sheamus on Kalisto followed by some clubs and a headlock. The Ascension plant Kalisto with an awkward double-team slingshot into a sidewalk slam. Sin Cara cleans house and lands a springboard moonsault on Viktor. Viktor tries a rebound powerbomb, but Sin Cara cranks it into a hurracanrana and a quick 2 count. Everybody runs into the ring for a brawl and the Dudleys set up double "wassup" shots on Sheamus and Barrett, with the help of the Lucha Dragons. Crowd loved that. The Dudleys and Sheamus/Barrett then wander off, brawling back to the entrance way (Big E: "watch out for those pumpkins!"). Viktor is left in the ring and Kalisto flips over the top rope with the Salida Del Sol to score the 3. Even though this tried to be non-stop "action", it was really a mish-mash of styles and seemed awkward, all around.

Back from commerical, Lawler tries to make a "joke" by saying he has his Halloween costume: he'll wear a white shirt that says LIFE and will hand out lemons. Brennan, has it go completely over his head and asks: "why not pennies"?

Backstage, Dean Ambrose runs into Cesaro and wonders if he's dressed up like Lex Luthor or The Transporter. Cesaro's down for the challenge and says: "when I step into the ring, I ruin people's dreams like I'm Freddy Kruger... you can be Jason Vorhees or something". Boo Dallas then pops into view. 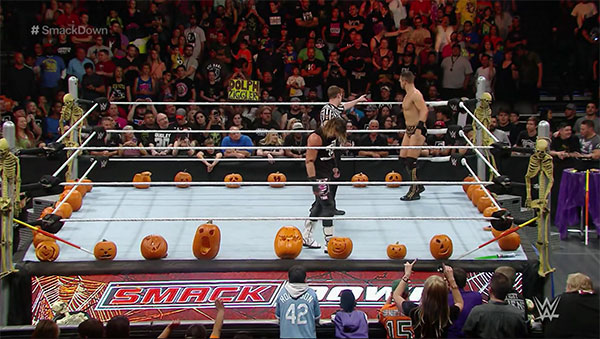 Trick or Treat Street Fight: Dolph Ziggler vs. The Miz

Pumpkins line the ring arpon, skeletons are hanging on the ringpost, and there's a bucket of apples at ringside. No way that comes into play. But first, it was not that long ago, when Summer Rae dumped Dolph for the debuting Tyler Breeze. Ziggler is wearing his usual 80's metalhead gear, but has added some black eye-liner... which Lawler explains to us is supposed to make him Nikki Sixx. I guess nowadays you could say that Ziggler's actually dressed up like Toni Storm. Eitehr way, it's quite lazy. Like me putting on a simple baseball cap and saying I'm Jose Altuve. They criss-cross (JUMP JUMP), until Ziggler tries a drop-kick, but it's countered into a double-leg catapult by Miz. Ziggler picks up a kendo stick and Miz counters with a .. lightsaber. Kendo stick jockstrap on Miz, then he gets clotheslined outside. The apple bucket comes into play as Miz gets swirleed into it. Ziggler puts a hollowed pumpkin on Miz's head (Jameson would be proud) and rolls him back inside. Ziggler with a super-kick to the pumpkin! Miz takes over by tossing Ziggler into the steps, then back inside to work the legs on the ringposts. Miz tries a figure four, but Ziggler counters with a small package and scores the 3. Only about 5 minutes, but it was worth it for the pumpkin super-kick. Post-match, Tyler Breeze and Summer Rae make their entrance. Breeze enters the ring and Ziggler fights him off, until Breeze attacks the "injured" leg. Breeze puts on a mild beatdown, until the refs break it up. Crowd doesn't seem to care.

But first, it was not that long ago (Monday on RAW), when Paige attacked Charlotte and Becky Lynch, effectively dissolving "Team PCB". Super-kick from Paige, right at the bell and the beating is on. Natalya sells Paige's light finger taps, err, punches, like howitzer shots. Discus clothesline and a German suplex from Natalya. Suddenly, MUSIC hits and "Team BAD" (Sasha Banks, Naomi and Tamina) hit the aisle to run down Nattie on the house mic. Paige uses the distraction to hit Natalya with her Rampage finisher (cradle DDT) to score the pin. Afterwards, Team BAD does a beatdown on Nattie. Well, that filled a segment.

Backstage, Dean Ambrose finds his final partner-- Ryback. Amrbose asks him if he's okay with stepping on the toes of the Wyatt Family. Ryback: "I don't step on toes.. I step on necks". Oh golly. Rejected Catchphrase #1,933.

Non-title match, as Del Rio is the reigning US Champion. Pre-match, Coulter cuts a promo on the ramp, declaring a new nation of "Mexamerica". Coulter finds the name "US Championship" divisive, so Del Rio officially re-names it "the Mexamerican Championship". Del Rio attacks at the bell and kicks R-Truth into the corner. Truth comes back with a spinning heel-kick and face-front suplex for 2. Del Rio works the arm for a bit, but gets halted on the top rope. Truth slips down and gets a flying double-stomp from Del Rio and that scores the 3.

Backstage, Boo Dallas hides in a laundry bin, still hoping to scare someone. He genuinely startles Mark Henry, then gets pummelled for it. Henry:"'Bout gave me a damn heart attack". 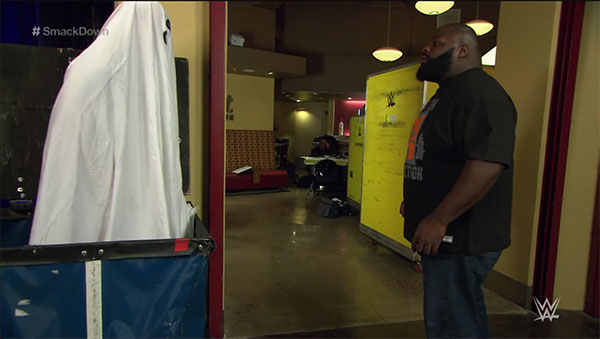 Wyatt sits in his rocker to direct traffic, so Braun Strowman, Luke Harper and Erick Rowan are the official in-ring participants. Oooh, a special hashtag, again as it's time to "#FacetheFear". Ryback trades heavy blows with Harper and Strowman, to start. Strowman floors Ryback with a vertical suplex to signal the commercial break. Back from the break, Rowan plants Ryback with a slam, then Harper flips over the top rope with a senton. Back-elbow from Rowan gets 2, then he applies a noogie. Rowan tries messing with Ambrose and Cesaro, but gets nailed with a spinebuster from Ryback. Hot tag to Ambrose, who cleans house by bulldogging Rowand drop-kicking Harper. Ambrose then goes up top, to the floor, and connects with an elbow on Harper and Rowan. Back in the ring, Rowan hits a spinning kick for 2. Another hot tag, this time to Cesaro who's a house o fire with running upper-cuts. He takes things outside for more upper-cuts, then back in for a reverse Samoan drop on Harper. Cesaro then hooks in the ____ Crossface. Strowman tries to break it up, but he gets blasted into the ringside table by Ambrose and Ryback. Cesaro off the top rope with a corssbody for 2, then the ____ Crossface again. Springboard corkscrew upper-cut from Cesaro, then sets up Harper for a potential Giant Swing. Strowman wakes up at ringside, tosses the table and distracts Cesaro, which allows Wyatt to get a shot in. Harper then connects with a sickle clothesline to get the pin. The Wyatt Family poses in the ring as the show ends. Energetic main event, even though Strowman and Ryback essentially disappeared for about 5 minutes.

Why'd You Watch This?:
Cuz' it's Halloween HavoK, chuckles! They indulged in the gimmick, but not too much that it became unbearable. The horror movie wannabees of the Wyatt Family got the main event treatment, the interviews referenced Halloween, some holiday themed "comedy" with Boo Dallas, and there was even a special set. I typically can't stand yet another Miz/Ziggler match, but this one had a PUMPKIN SUPER-KICK. I'll take that over their Colonel Sanders or countless IC title matches, any day. Not an awesome show, but mildly entertaining. Had this been a regular show, you probably would've completely forgotten about it, but add the Halloween package and it's somewhat memorable. Prime Halloween HavoK!